Sir Alex Ferguson predicted "a nightmare" for Manchester United at Goodison Park - and yet for so long it was all going like a dream.

Ferguson was referring to the atmosphere inside one of England's great old football arenas rather than United's record at Everton, which has been outstanding in recent years.

And it was the "welcome" Ferguson feared Wayne Rooney would receive from the fans who once adored him after allegations about his private life that persuaded the Scot to leave him out of United's squad.

The debate looked little more than a sideshow as Goodison Park's sombre-voiced announcer confirmed that there would be an additional three minutes with United leading 3-1 and in control. Then came Ferguson's nightmare in front of Gwladys Street.

Amid frenzied scenes, United's advantage evaporated in seconds as Tim Cahill and Mikel Arteta struck in swift succession to earn Everton a point that seemed light years away when the board was hoisted for added time.

Ferguson wore the expression of a man who been punched firmly on the nose, and in football terms that was the blow Everton had delivered in those closing seconds.

And, from nowhere, Ferguson's decision to spare Rooney Goodison Park's hostility came into sharp relief. Should he have trusted his finest player, however fragile his temperament can be, to tough it out on the basis he will have to face fans sometime and he might as well get on with it?

My view is that Ferguson should have played Rooney simply because of his quality, and it almost hinted at weakness (not something that can usually be associated with anyone or anything at Old Trafford) to exclude him.

Did his absence cost United the win? No.

Ferguson's side played some wonderful attacking football, Dimitar Berbatov in particular, and it was the efforts of Everton keeper Tim Howard rather the missing influence of Rooney that gave David Moyes' side the chance to launch that late surge.

It was the basic principle of leaving Rooney, a player of such importance, on the sidelines because of the abuse he may get from opposing supporters that is open to question. Presumably his next Premier League game will be against Liverpool next Sunday, and while that is at Old Trafford it is unlikely the travelling supporters will be in sympathetic mood.

Rooney showed with his performance for England in Switzerland that he has the ability to close out personal problems when it comes to performing in the pitch - although he has struggled to excel against his former club at Goodison Park. 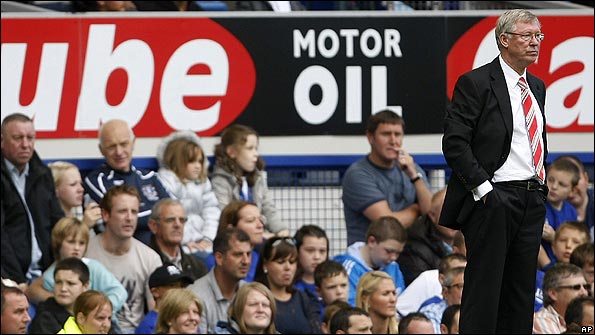 Fabio Capello played Rooney in Basle on purely footballing grounds after checking his state of mind and was rewarded. Ferguson, unless Rooney's mental fitness to figure has altered dramatically since Tuesday, would have been better served by playing him.

Of course Goodison Park would have revelled and added to his discomfort, as would any opposing supporters in the current climate surrounding Rooney, but Ferguson's decision was effectively a public admission that he could not cope in those surroundings.

Ferguson will, however, have been more concerned by how United, as they did at Fulham, squandered two points at the end of a thrilling game that did great credit to both sides.

Everton took the lead through Steven Pienaar, who demonstrated with every contribution why Moyes would not sell him despite the fear he could leave on a free transfer at the end of this season after failing to agree a contract, but United responded in style.

Goals from Darren Fletcher and Nemanja Vidic put them in front, while the third from Berbatov was a thing of genuine footballing beauty. Paul Scholes' precise pass took out Sylvain Distin, but Berbatov made a difficult task look simplicity itself with instant control and a perfect finish.

Berbatov was outstanding throughout, showing balance, control and technique of the highest class. He looked like a man who has come fully to terms with being a Manchester United player.

But the frailty that saw two points go west at Craven Cottage reared its head again, and with Chelsea putting opponents away with ruthless efficiency, these are slips that could count.

For Everton, Moyes will see this late recovery as a catalyst for a belated start to their season. There was much to admire from Everton here, although so much attractive approach play was undermined by sloppy defending early in the second half.

If Moyes can produce a cutting edge from somewhere, and Yakubu produced a bustling and impressive cameo, the raw material is in place for a top six challenge.

In a game that was pure entertainment from first to last, there was even controversy in the final seconds when Moyes was infuriated by referee Martin Atkinson's decision to call time as Everton flooded forward in search of a fourth goal and Phil Jagielka was through on Edwin van der Sar.

He raced on to the pitch to remonstrate with Atkinson and continued his complaints later, but Moyes was also elated with Everton's performance, marked by a mixture of neat passing and persistence.

Expectations are raised at Everton this season, elevated by wins against Chelsea and United at Goodison Park last season, and if Moyes can find a regular supply of goals they can be fulfilled.

Ferguson's problems lie at the back rather than in attack on this evidence - the return of Rooney will add to United's quality and reduce the risk of the nightmare that visited Ferguson in those closing moments.