Ferguson's willingess to make 10 changes to the line-up that drew at Everton - and with both eyes seemingly fixed on Sunday's Premier League meeting with Liverpool - gave fresh impetus to the belief that the Champions League group phase is now more about finance than serious footballing competition. And far too predictable by half.

It is one thing to play fast and loose with a rotation policy in the Carling Cup, quite another to conduct experiments in Europe's elite competition.

Ferguson's mass shuffling of United's resources also allowed Rangers, and his old friend and former assistant Walter Smith, to take all the pride and honours from a turgid encounter at Old Trafford.

True, Rio Ferdinand and Wayne Rooney returned but, by any reckoning, this was a patchy United line-up. And Ferguson paid the price by watching his side bang their heads against a brick wall for 90 minutes in this goalless draw. 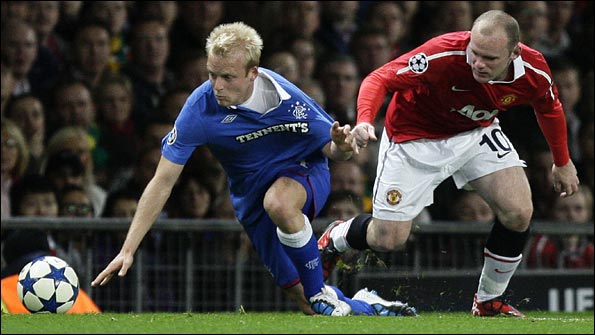 He even came close to confessing the error of his ways by admitting that United's endless journey into the cul-de-sac of the Rangers rearguard cried out for the subtle touches of this season's revitalised Berbatov. Ferguson could have mentioned the invention and guile of the absent Scholes in the same breath.

Of course, the outcome is hardly fatal to United's chances of progressing into the knockout phase. In all probability, they will reach that target in comfort, which increases the growing sense that this particular Champions League format is flawed and requires fresh examination.

Too often group games are simply skirmishes and formalities before the serious business begins in the knockout games. The cutting edge of competition is too often absent, which may result in more coaches following Ferguson's lead, safe in the knowledge there is time to recover from any unexpected slips.

This meeting between Manchester United and the champions of Scotland was not even a sell-out. Almost unthinkable in days gone by.

Ferguson, to his credit, refused all opportunities to criticise the lovingly-crafted negativity that Smith and his Rangers side brought to Old Trafford. And he was right to do so.

Even the atmosphere was subdued, shaped from the opening moments by the certain knowledge that a war of attrition was about to develop into a full-scale game of attack against defence for 74,000 observers.

Smith almost apologised for his team's approach, blaming the huge financial disparity between clubs competing in the Champions League for a damage limitation - in this instance, damage avoidance - approach.

"Scottish teams are not in the position we were once in, where we could compete to sign the best players in the British Isles, so we have to find a way to nullify the opposition as best as we can," he explained.

"It's down to a manager to try to find a way. Unfortunately, in any walk of life it is easier to stop someone doing something than it is to actually create it.

"We don't feel proud of the fact that we are doing it but there is nothing else left for us."

This was one of the few things Smith got wrong. He had every right to feel proud of his players - the Rangers fans who applauded each block and tackle certainly did.

David Weir and Madjid Bougherra were magnificent in defence, while every Rangers man carried out Smith's orders with such diligence that goalkeeper Allan McGregor was almost untroubled in the face of ceaseless United possession. It was a disciplined performance, too, with only 11 fouls committed.

And rarely can a striker have travelled so far in a match without ever having the ball as Kenny Miller, isolated from his colleagues throughout but given a standing ovation from those gathered in Old Trafford's East Stand simply for running himself to a standstill.

Ferguson insisted Rangers will find it more difficult to take this approach at Ibrox - but he may also feel the need to select a better Manchester United side to combat them.

United's night of labour and frustration was compounded by the dreadful injury to Antonio Valencia, who fractured his ankle in an innocuous collision with Kirk Broadfoot and will miss the rest of the season. 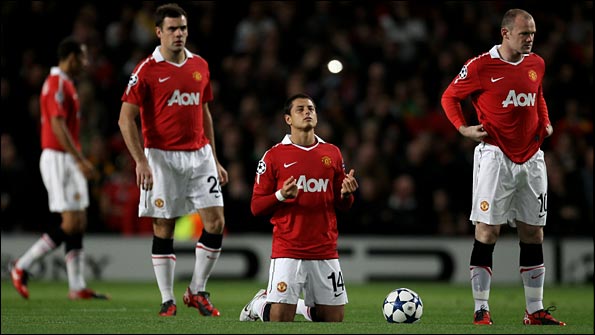 United are left to reflect on a missed opportunity. Photo: AP

Ferdinand's return to senior action after the knee injury that ended his World Cup before it began amounted to little more than a toning up exercise, while the recalled Rooney cut a listless figure and was as bereft of ideas as the rest of his United colleagues by the time the curtain came down.

For Rangers, this was night that gave them honour. The purists may sniff, Lionel Messi's "anti-football" jibes may be revisited by some in search of cheap shots - but this was a job wonderfully done and orchestrated by a manager who manipulated his resources better than his opposite number.

The only serious pressure Ferguson was able to apply on Rangers was via a public pre-order, delivered in his programme notes, for coach Ian Durrant to produce a bottle of Australia's finest Penfolds Grange wine in time for the return meeting at Ibrox.

Smith and his men deserved a toast on Tuesday - but there was also a warning for Uefa that the Champions League champagne may be in danger of losing some of its sparkle.