If England carry a burning sense of injustice as part of their baggage on the long flight home from South Africa on Monday night, Fabio Capello and his players will fool only themselves.

Capello's complaint about the incompetence of officialdom after England's humiliating last-16 exit against Germany was little more than a flimsy fig leaf when it came to disguising shortcomings exposed in a World Cup campaign that was a monument to mediocrity.

England's coach, of course, had every right to draw attention to one of the worst decisions in the tournament's history as a mitigating factor in their eventual defeat by a vastly-superior Germany.

Capello must not think, however, that Uruguayan linesman Mauricio Espinosa's failure to spot Frank Lampard's clever finish dropping well behind Manuel Neuer's goalline with the score at 2-1 was a defining moment that somehow blocked England's path to glory.

The course of the game may have been altered had Lampard's goal, moments after Matthew Upson had reduced Germany's two-goal lead, stood. On the other hand, it may not.

Germany will simply regard it as schadenfreude, payback time 44 years on for Sir Geoff Hurst's goal in the 1966 World Cup Final that gave England their first and last win in the tournament.

What is beyond dispute is that England's standing in world football was put into context by the manner in which they were comprehensively dismantled by Germany's speed of thought and limb that left a side that arrived here with so much hope looking lumbering and old. 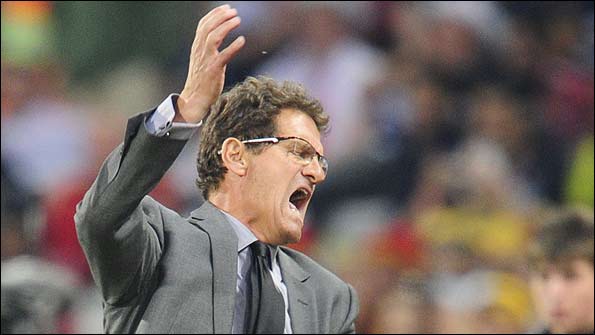 England had a good 15 minutes either side of Lampard's "ghost goal". The rest was a horror show that maybe we should have seen coming given the performances of Capello's team since they landed in South Africa.

Franz Beckenbauer was criticised here for his contemptuous remarks deriding England as a "kick and rush" team heading backwards under Capello. They carried more resonance when a light was shone on the difference between these two teams - maybe "Der Kaiser" had a point after all.

Not a single England player, with perhaps the exception of David James, enhanced their reputation in Bloemfontein. John Terry and Matthew Upson were pillars, almost literally, in defence and Germany ran through midfield at will.

England were cut to ribbons, by-passed and pedestrian in midfield and impotent in attack. It was that bad.

And, in one of the great South African puzzles, Wayne Rooney's World Cup has come and gone without England's most celebrated young player making an impact.

From the moment he erupted in fury against Platinum Stars, he has cut a subdued figure, struggling for form and fitness. Rooney's failure under pressure will remain one of the big mysteries of England's time here.

If this was, as touted, one of the worst and most inexperienced Germany teams to play at a World Cup, it delivers a gruesome verdict on England. Inexperienced or not, they taught this ageing England team a painful lesson.

Many of those following the England camp, myself included, clutched at straws offered by victory against Slovenia. Such was the paucity of quality in their performances against the United States and Algeria that a win against the tournament's smallest nation was built up by a succession of players as a foundation for victory against Germany.

From the opening moments, when Mesut Ozil sliced England open, the false dawn was uncovered again.

Indeed, once Thomas Mueller added two goals to first-half strikes from Miroslav Klose and Lukas Podolski, there was the real danger that Germany would equal, and perhaps even eclipse, England's 5-1 win in Munich in 2001.

It was the smallest of mercies that this particular embarrassment was avoided, but there is no consolation to take from the rest of England's stay at their opulent Royal Bafokeng Sports Campus headquarters.

Capello will be the central figure in the inquest that is bound to follow England's World Cup, which started to veer off course weeks before departure for South Africa.

From the farce of the Capello index to the chaotic squad selection, the Italian mislaid the golden touch that saw England sail untroubled through qualifying.

Capello's selection values were suddenly ditched, with retired players taking calls and injured players taking to the plane for South Africa. It was as if his iron resolve wavered fatally at the last moment and it never returned.

Jamie Carragher's recall from England exile was not a success, while even the plea to Manchester United's Paul Scholes appeared more of an act of desperation than a sound plan as the World Cup went on. 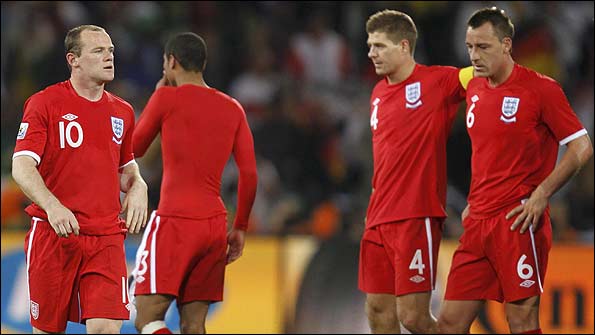 Rooney, Gerrard and Terry failed to live up to their reputations in South Africa - photo: Reuters

Capello shows no signs of quitting although he will hold talks with the Football Association. The question to be asked is could anyone do any better assembling a team handicapped by the rigours of a gruelling Premier League season and the shortage of outstanding young English talent?

The FA, having removed a break clause in Capello's contract that could ultimately prove expensive, must also ponder whether they could seriously find an upgrade on the current incumbent.

This is for another day. When the ashes of England's World Cup are raked over, it would appear it was ill-starred from day one when captain Rio Ferdinand suffered a serious knee injury and was ruled out.

And, when hope was offered by their solitary win against Slovenia, old rivals Germany were waiting to douse England in ice cold realism.

Capello had as undistinguished a World Cup as his players, showing tactical inflexibilty by relying on the goal-shy old warhorse Emile Heskey to partner Wayne Rooney in England's opening two games. This was misplaced loyalty and ensured his side never gathered serious momentum.

I long campaigned for Capello to try Steven Gerrard, England's best player in South Africa, behind Rooney but he seemed set in concrete when it came to his planning and it was never given serious consideration.

If Capello does stay, he may have to call time on the careers of some of England's so-called "Golden Generation", who have flouted that tag in a succession of major tournaments.

James will surely make way for Joe Hart in goal, while even old stalwarts such as Terry, Lampard and Gerrard will come under closer scrutiny, although a dearth of potential replacements may prolong their England careers.

Ashley Cole will continue at left-back but Glen Johnson remains a defensive liability against top-class opposition. Shaun Wright-Phillips has surely failed to produce for a final time while Aaron Lennon was also a disappointment.

Capello clearly did not trust Peter Crouch, so if he remains in charge he faces a huge task to unearth the gems that can take England towards Euro 2012.

As England's players filed past disconsolately in the bowels of the Free State Stadium, they looked like men who had aged visibly alongside the fresh-faced Germany team who were only to happy to discuss their emphatic triumph.

It was England's World Cup in microcosm. Lethargic, listless, subdued - a campaign that finished as it started, in bitter disappointment.

When England recall these past four weeks in South Africa, it should be remembered as the World Cup that passed them by.

And, if they look to Germany as the template, the Football Association must accept the future started when the final whistle sounded on this desperate South African mission.

England and the Football Association must not hide behind a linesman's failure to give a goal - it would be another grave error among many committed in South Africa.

David James: One of the few England players to distinguish himself. Made two fine first-half saves but should have done better with Germany's third. 6

Ashley Cole: Not one of his better nights. Struggled as England fell apart late on. 5.

John Terry: Poor performance and lack of mobility exploited by Germany. Caught badly out of position for first goal. 4.

Matthew Upson Poor. Badly positioned and then feeble in the challenge for Miroslav Klose's first goal. May not be seen at England level again. 4.

Frank Lampard: Did everything he could to get England going. Robbed of a goal by a linesman's failure to spot his effort dropping behind the line and also hit the bar. 6

Gareth Barry: Dreadful night for England's midfield anchor. Gave the ball away for Germany's third then a weak tackle contributed to their fourth. 4.

Steven Gerrard: Tried manfully but to no avail. 5.

Joe Cole: Unable to influence the game as it drifted away from England. 5.

Emile Heskey: No time to change the course of the game. Surely his final England performance. 5

Shaun Wright-Phillips: Only on in dying minutes. No rating.