Capello in no mood for messing under the big top

The circus has rolled into town. And so have England and Germany ahead of the latest chapter in their story of World Cup combat.

In what could be taken for either a sick joke or a cruel history lesson in the past failings of England's footballers, posters for "The McLaren Circus - full 90-minute show" greeted their arrival in South Africa's Free State.

The circus was doing brisk business, while Joachim Loew and Fabio Capello provided a sideshow of their own just a few miles down the road.

Germany coach Loew did not bother to turn up for the pre-match press conference while England counterpart Fabio Capello and captain Steven Gerrard's address ahead of arguably the World Cup's most anticipated game to date clocked in at a few seconds over five minutes. Their hasty exit later prompted loud complaints from sections of the world's media.

The exchanges were brief, or in Loew's case non-existent, but were heavily laced with psychological significance. 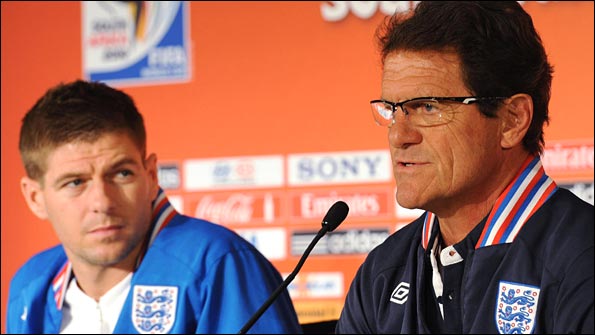 Loew's absence was initially put down as a German protest against being unable to train on the Free State Stadium pitch - a claim swiftly denied by their camp and simply put down to a scheduling difficulty.

The German coach's absence was explained by the wildly contrasting theories that he was either arrogant or running scared. The truth probably lay elsewhere.

Intriguingly, Germany found time to whistle up goalkeeping coach Andreas Kopke to share his thoughts on a variety of issues, include the hot topic of penalties and England's ability to take them under pressure as opposed to practising.

Kopke was a handy man for Loew to have around, as he was none other than the keeper who saved Gareth Southgate's decisive penalty at Wembley that eased Germany's passage into the Euro 96 final.

Kopke helpfully pointed out that all England's practising behind closed doors at Rustenburg would not help them in the potential pressure-cooker atmosphere of a shoot-out on Sunday - and with that he was gone to leave the stage clear for Capello.

Capello was in clipped and businesslike mood, with Gerrard slightly more effusive. Words were not wasted. It was also read as the Italian's curt response to his counterpart's decision not to even pitch up.

The England party's hasty departure was poorly received by many sections of the media, although the Football Association was swift to point out that they had followed Fifa guidelines to the letter. Loew did not, although he gave a lengthy briefing on Friday.

This somewhat surreal prelude to the main event clearly scratched at tensions in both camps that lie close to the surface ahead of the meeting in Bloemfontein, as well as causing some unrest among those who had descended on the "City Of Roses" hanging on every word from Loew and Capello.

The mood was more heavyweight weigh-in than pre-World Cup media conference. And if the game itself contains as much intrigue in as little time as we saw under the big white tent in Bloemfontein, then this could be a classic.

Of course Kopke's appearance could have been mere coincidence. Cometh the hour cometh the goalkeeping coach. But if England wanted to see one of the ghosts of failures past against Germany there he was, larger than life in front of them before the biggest game of Capello's reign to date.

If England were using a scare tactic of their own in among the mind games, it was to warn the German camp that Wayne Rooney's World Cup is showing signs of catching fire.

Capello and Gerrard issued more warnings about his form behind closed doors in training, a fact England are only too happy to let seep into the German psyche, backed up by glowing references for a player who has yet to sparkle in South Africa.

Rooney, inevitably, will be central to all of England's hopes of redressing the balance of recent World Cup history against Germany. The camp must be taken at its word when they deliver ominous bulletins in the direction of the opposition about his resurgence, but he did suggest an upturn in form was on the way in patches against Slovenia,

Capello knows the history of this fixture, but is treating it with supreme indifference in the context of Sunday's meeting. And he continued to hammer out the message of his confidence in an England team that finally showed signs of coming to life in the win against Slovenia that put them in the knockout phase.

England's players have delivered a blaze of optimistic statements in the build up to a game that has captured the imagination of this vast nation, but it must be tempered by the fact that their great victory of this World Cup has been against the smallest country taking part.

Capello revealed he has only one selection decision to make. He has to decide who partners John Terry in defence - should he go for the man in possession Matthew Upson, Jamie Carragher after serving a one-match ban, or fit-again Ledley King?

The recall of King after a groin injury would represent a major gamble, given that this gifted but injury-prone player lasted only 45 minutes of the first game against the United States before being forced to give best to yet another problem.

Germany, even a young team in transition, represent a huge task and will require England to move their performance on to another plane from what we have seen from them so far.

Kopke, Loew's mouthpiece for the night, made a bold declaration that would have been echoed by the coach. Germany's players may be shorter on experience than England's but "they have itchy feet for this game."

Bastian Schweinsteiger is expected to shake off his thigh injury to play, a major lift for Loew, while Miroslav Klose is in line to return after suspension.

And Bloemfontein has entered into the spirit of the occasion, elated at landing one of the glamour ties of this World Cup.

Salesmen lurk at traffic lights brandishing flags in the colours of both nations attempting to guess, mainly unsuccessfully it would appear, which country the occupants of oncoming cars support in the hope of making a sale.

No hard-sell is needed for what will take place in the Free State Stadium on Sunday afternoon. The rich history of England and Germany when they meet at the World Cup provides the perfect sales pitch.

And you can watch and listen to Germany v England live across the BBC from 1400 BST on BBC1/HD and BBC Radio 5 live and on this website.