Fabio Capello's pep talk was not suddenly interrupted by the so-called rebel factions in England's squad bundling him into the boot of a waiting car.

In fact, England's players could not have looked less mutinous. They gathered with heads bowed obediently around Capello as he delivered a short, sharp assertion of his authority before training in Rustenburg. The Bounty this was not.

And Frank Lampard's revelations about the "crisis meeting" at the Royal Bafokeng Sports Campus on Sunday hardly painted a picture of naked hostility between Capello and his charges as he said: "The manager just spoke himself and then we watched the Algeria game."

If England's players had called a war with Capello, it appeared nobody came. And judging by the emphatic way John Terry was put in his place by the Italian for the "big mistake" of publicly demanding the inclusion of Joe Cole, who can blame them?

Make no mistake, there has been discontent within the England camp. It appears Capello's rigid and ruthless approach, so respected and revered in previously short doses, has become less of a pleasure and more of a pain over this long period of weeks.

And the cracks were exposed by former captain Terry's electrifying media briefing, that started out with him peddling England's united front and ended with him pitched somewhere between a mutineer plotting a Cape Town coup to unseat Capello and the spokesman for a disgruntled squad and dissatisfied nation.

So it was time for a measure of calm to return to England's squad after the storm that had followed the dismal draw against Algeria, whipped up by Terry's frankness.

Capello has not exactly made the debate disappear by publicly criticising Terry for his comments, but any suggestion the coach has let England's squad escape his iron grasp can now be dismissed.

Frank Lampard provided a steadying influence with a rebuttal of claims that Capello's squad is laced with rebels, and a measured analysis of a flawed World Cup campaign that could yet pick up momentum with a win against Slovenia that would put England in the last 16. 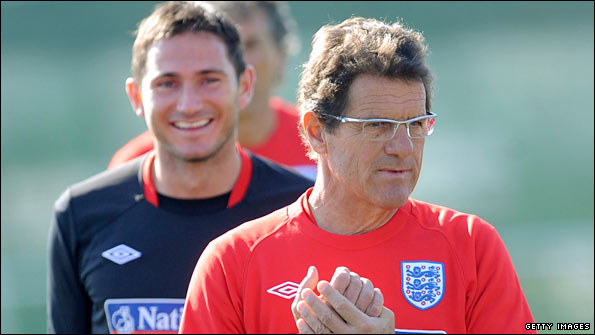 But before Lampard attempted to restore equilibrium to what many believed to be a broken England squad, it is worth revisiting Terry's part in the events of the last 48 hours.

Terry did not disguise his feelings about the direction England's World Cup was taking, revealing boredom within the squad, his open insistence that Joe Cole should start and his intention to confront some of the difficulties with Capello.

When the meeting came, it appeared no-one spoke up, leaving Terry an isolated voice exposed to public censure from Capello and with any grievances left unsaid, which in itself is a problem. If there is an undercurrent of discontent undermining England's World Cup, then surely it would be better for it to be debated before this crucial game in Port Elizabeth.

If England's players genuinely felt something needed saying, they should have stepped forward and spoken up rather leaving any problems - real or imagined - to fester.

Terry has been castigated in many quarters for his exposé of life under Capello and his determination to have it out in the open, even if he was running the risk of upsetting England's unbending coach.

Here is my take: I believe Terry was entitled to say pretty much everything he said, apart from his shameless lobbying for the inclusion of Joe Cole. To say someone should be in is self-evidently saying someone should be out - and this is not Terry's place.

And his additional announcement that "Joe and Wayne (Rooney) are the only two in the side that can break down defences" might have raised eyebrows among players such as Lampard, Steven Gerrard, Aaron Lennon and others.

So Capello was right to take Terry to task for appearing to want to take a hand in team selection. This must always be the Italian's territory and Terry made the mistake of not only angering his coach, but also gave the impression, perhaps inadvertently, that some of his England colleagues on show so far in South Africa were not up to the task.

But there the criticism ends. England were stumbling along in such aimless fashion that someone had to air the worries of the squad. Terry may have taken the message too far, but no-one should blame him for trying.

If it was his intent to ambush Capello at Sunday's meeting, he was hardly subtle as he revealed his plans hours in advance, alerting the supposed "enemy".

The Football Association's choice of Terry to speak on Sunday was the correct one, even if its hierarchy may have winced at some of the headlines he created. On an operational note, the decision on who speaks at briefings is made between the FA media department and the team management - with a nod to the most appropriate person on the day.

Terry's natural tub-thumping, albeit somewhat over-enthusiastic, fitted the bill after the torture of Algeria. Someone needed to rally the troops, to spark some sort of reaction in a team that looked like it needed to be collectively jabbed with a cattle prod in Cape Town.

Yes, Terry stepped over the line in attempting to influence Capello's team selection, but so much of what else he said carried real worth as an effort to galvanise England's listless World Cup.

As Terry was the ideal man to speak on Sunday, so the mature and experienced figure of Lampard was the natural follow up act on Monday. And he delivered his lines with a mixture of humour and candour that at least allowed some semblance of sanity to be restored at England's Rustenburg HQ.

It needed to be ahead of a game that may not just shape England's World Cup but also Capello's future. He has admitted it is one of the biggest games of his career - and he is not wrong.

Lampard said: "No matter who the manager is, you have up and down moments. There are no factions and we're looking to turn things round against Slovenia.

"The manager has complete respect from everybody. We want to give the fans and the nation something to be happy and proud about. We have to put perspective on this."

There still appeared to be some uncertainty in Capello's mind about thrusting Joe Cole into a game that cries out for that something extra he can offer. Is he destined to be a talent that is not quite trusted by Capello, too much of a free spirit to fit within the rigid tactical framework the coach prefers?

I hope not. Cole's inclusion will allow Gerrard (I know, here I go again) to link up with Rooney in attacking positions.

The World Cup is such a fickle beast - see 1986 and 1990 for proof - that a win against Slovenia could be just the springboard required to end the air of crisis that has hung over England since the draw with Algeria.

It can restore faith in Capello, as victories tend to silence loose lips and those who may just be tempted to spread the bad word about a coach and his control.

Lampard started the process followed by Capello, although the coach's comments about "fantastic" team spirit were accompanied by a rider that made it clear they were "not on holiday".

Capello and England's squad will be on holiday if they fail to get the required result against Slovenia - and the recriminations will last a lot longer than their time on the beach.