Clueless England on the brink

Fabio Capello looked every inch as clueless as his players as he groped around for reasons behind the World Cup torture England had just inflicted on Cape Town.

For the first time in his reign as coach Capello looked totally nonplussed, even a little out of his depth, under interrogation after one of the worst England displays in recent memory.

Capello clutched desperately at straws as he cited the pressure of a tournament that apparently reduces players who fly in training to the sort of embarrassing incompetence that characterised every moment of England's draw with Algeria.

No excuses justify the sort of performance England put on in the opulent surroundings of Cape Town Stadium - or the behaviour of Wayne Rooney as he chose the most inappropriate of moments to publicly insult the country's loyal travelling support.

Capello got the message about just how bad this was when he was asked if he would resign if England fail to reach the knockout phase, a fate that will almost certainly befall them if they fail to beat Slovenia next Wednesday.

"It is too early to speak about this" was his answer. It is certainly not too early to contemplate the grim possibility that England might be back home with more than one British tennis player still involved at Wimbledon. The outlook could really be that bad.

Rooney's antics at the final whistle capped as desperate a night as he has had for club and country in recent times. He has rarely looked so out of sorts, with even the ball control that usually comes as naturally to him as breathing looking way beyond him. 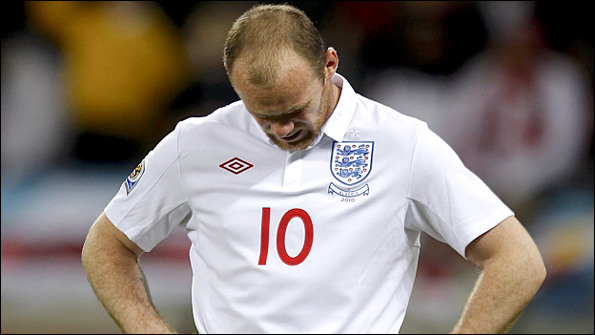 It was a frustrating night for star striker Wayne Rooney

Frustration, and what appeared to be another injury, may have got the better of him, but there is no defence for taking it out on fans who were simply delivering a brutally honest verdict on what they had just witnessed.

Rooney was well within his rights to approach the television cameras and address England's support - but only if he was going to deliver a heartfelt apology for what they had just paid lots of hard-earned cash to endure.

Instead, he appeared angry and mystified that they chose to deliver such a resounding raspberry in England's direction. What did he expect? He should reflect on this and deliver that apology at the earliest opportunity.

There is, of course, the school of thought that fans should never turn on their own team. But there is also the theory that you pay your money and take your choice - and no-one should condemn England's fans who have travelled thousands of miles only to watch what they were served up in Cape Town.

Rooney's poor performance took its place on a long list of concerns hanging over a World Cup campaign that has not got started from the moment captain Rio Ferdinand was injured on the first day of serious work in Rustenburg.

It is also one that will come to a premature end unless Capello can fashion a major improvement between now and next Wednesday.

If Capello's somewhat unorthodox arrival at his selection of goalkeeper, with David James replacing Robert Green, was the major talking point before the game, it is among the least of the Italian's worries now.

England's performance flatlined throughout. Not one ounce of inspiration could be detected in players who looked jaded from the opening moments and for periods Algeria looked the more composed and ordered side.

Steven Gerrard attempted to drive England forward on rare occasions, but Frank Lampard's impact was non-existent apart from a shot in the first half that ended as the only serious threat to Algeria.

Gareth Barry failed to establish the platform and stability which was supposed to make England blossom, while up front Emile Heskey was as hard-working as ever but no longer looks like he has got a goal in him.

Capello threw on various forwards in the shape of Shaun Wright-Phillips, Jermain Defoe and Peter Crouch as England became mired in desperate straits, but they were so poor that Franz Beckenbauer's scathing criticism of their style might have actually been viewed as glowing praise on this evidence.

The fact that a bird flew into the middle of the action and landed on the top of Algeria's net, then perched blissfully undisturbed, was a fitting symbol of England's impotence.

Capello has had England's players together for what seems like an age, but familiarity almost looks like it has bred contempt. The mood is wrong. This was a stale offering, and the comfort in which Algeria survived must set the alarm bells ringing.

Of course such condemnation could end with the critics looking foolish. It has happened before in 1986 and 1990 to name but two World Cups. We might look back on this night and laugh when Gerrard lifts the World Cup next month - but to imagine England shaping any success on the basis of what they have produced so far takes a mammoth leap of the imagination.

England were not even capable of mastering basics. Passes went astray with painful regularity, simple balls were wasted by dreadful control and there was even a moment when Gerrard and Barry were confused by each other's mere presence in midfield.

Capello cannot pass that off as pressure. It is not the result of fatigue at the end of a long season. It is simply not good enough.

And Capello himself is suddenly fallible and vulnerable. Ever since his ill-fated flirtation with the Capello index he has lost the assured touch that saw England sail through qualifying.

There was a cut-and-paste appearance to England's World Cup squad selection, with injured players picked and old timers such as Paul Scholes receiving calls to try and tempt them out of retirement.

What did that scream out to the players who had taken England to the World Cup so impressively?

As was stated after the draw against the United States, if England's players need to improve drastically, then the same applies to their coach.

Of course this could all have been excused had England delivered out here - instead they have not even spluttered into action yet.

How Capello responds to this shocking night will shape much of his future as England coach. No-one is suggesting his job would be in immediate jeopardy should England fail to beat Slovenia, but such a failure would represent a damaging scar on his reputation and would take major repair.

Capello's prime task is to get to the bottom of what is troubling Rooney. England will operate in vastly reduced circumstances if he continues to perform so poorly. If he can reignite this world-class player's spark, then Capello could yet be in business.

Rooney carries an unbreakable spirit into his game - but even that looked snuffed out last night. Capello must work on mind and body before England's next test.

It was only reputation that kept Rooney on the pitch against Algeria. No-one could have complained had Capello removed him.

Old hat in this blog I know, but surely now is the time for Capello to reshape his side and give Rooney more potent support in the shape of Gerrard?

Heskey was by no means the worst England player against Algeria, but his main purpose, on the basis it is certainly not scoring goals, is to bring the best out of Rooney, Is that happening? Not so far.

And has Joe Cole caused some form of grave offence behind the scenes to seemingly disappear so comprehensively off Capello's radar?

England's lack of variety in their opening games has called out for the unpredictability and creativity he can provide, so why has Capello chosen to ignore him in favour of Wright-Phillips, who has produced little to back up his coach's preference?

Cole's presence could release Gerrard further forward and perhaps even take some of the shackles off the subdued Lampard. Capello would still face problems on the right because Aaron Lennon has not delivered on any level yet, but there is room for manouevre.

England's players and Capello may take such severe, and merited, criticism for this display and use it as a tool to actually kickstart their World Cup. This does not make the criticism wrong - any search for positives from their second game would end up on stony ground.

If there is a chink of light among the gloom that will accompany England on their return to Rustenburg, then it is the knowledge that they still have a very good chance of reachiing the last 16.

Capello will know, as will his players, that they will not grasp that opportunity if a performance as wholly unacceptable as this is served up in Port Elizabeth.

Glen Johnson: Poor in possession and troubled by the occasional Algerian attack. 5.

John Terry: Not his greatest night, but performed adequately. 6.

Aaron Lennon: Poor once again. Ironically hauled off after his one decent cross. 4.

Frank Lampard: Should have scored with a close range effort in the first half. His World Cup has not started. 5

Gareth Barry: Still looked short of fitness and gave the ball away too much. 5

Steven Gerrard: Plenty of effort but quiet. Needs to be utilised better and yes I will say it again, behind Rooney. 5

Wayne Rooney: When did he last play as badly as this? Could not do a thing right and rounded it off with an ill-advised attack on England's fans. 4

Emile Heskey: Honest trier but not a goal threat. Time for a change. 6.

Peter Crouch: Not given any time to make a serious impact. No rating.