Patrice Evra may have taken it too literally - but in the space of ten minutes he demonstrated that it is guts as much as glory that lies at the heart of Manchester United's relentless pursuit of success.

In the opening moments of the second half, as a struggling United fought to set the platform for a priceless victory against Tottenham, Evra was bent double on the Old Trafford turf.

Evra, overcome by sickness and stifling heat, was violently ill several times and needed lengthy attention before he was in a fit state to continue.

When he did resume, his response to his plight was to provide a cross that almost allowed Dimitar Berbatov to set up a goal for Darren Fletcher then win a penalty with a surge into the area that was abruptly halted by Benoit Assou-Ekotto's foul.

In the absence of Wayne Rooney, possibly missing for United's final two games with a groin injury, Evra epitomised the spirit that dragged Sir Alex Ferguson's side to a priceless three points.

Nani was in similar strife to Evra before the final whistle, but he also summoned up the strength to make a pivotal contribution as United secured the win they needed to play on any frayed Chelsea nerves. 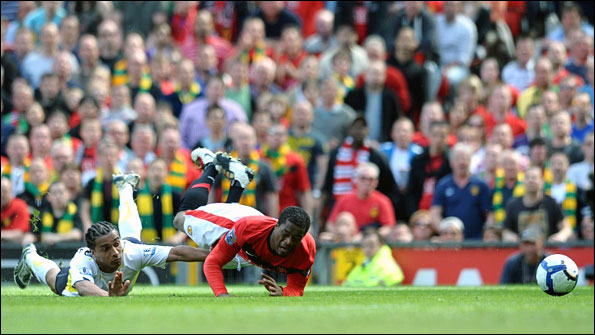 Evra overcame fatigue as he made a telling contribution to his team's cause. Photo: AFP

Evra's charge allowed Ryan Giggs to put United ahead from the spot - but Spurs looked to have inflicted a serious wound when Ledley King equalised with 20 minutes left.

In his programme notes Ferguson urged United's fans, despite the tension that comes with the sharp end of the season, to: "Relax if you can and soak it all up."

And what might have given Ferguson hope that a title campaign that was arguably within 19 seconds of extinction before Paul Scholes' winner at Manchester City may yet end in triumph, was the composed manner in which they responded to the setback of King's goal.

Nani's growing maturity was in evidence once again when he took a pass from Federico Macheda, a bold introduction by Ferguson in place of defender Rafael, nine minutes from the end and timed the delivery of his finish perfectly to loft the ball over the onrushing Heurelho Gomes in front of an elated Stretford End.

The Portuguese winger was then fouled by Wilson Palacios for Giggs to conclude proceedings from the spot. And as a stone-faced Ferguson strode off at the final whistle, pausing for a brief punch of the fists, the message from Old Trafford was clear.

It was this - United will track Chelsea all the way to the final day of the season, accompanied by the rich irony that any sort of result for Liverpool against Carlo Ancelotti's side could actually send the title to Old Trafford for a record 19th time. How will The Kop feel about that unpalatable prospect?

With Rooney reduced to a spectator's role in an executive box, United spent the first 45 minutes mourning his loss. Spurs came out in sympathy to make for the dullest spectacle imaginable.

United raised their game after the break, showing that they can get their hands dirty if Rooney is not around to provide the glitter.

And as with Scholes at Eastlands, Ferguson's old guard played its part as Giggs, seemingly immune to tension after a lifetime at the top, slotted two penalties.

United's cause was helped by a performance from Dimitar Berbatov that showed many more of the qualities that made him the club's record buy at £30.75m from Spurs. It was not blockbusting stuff, but the Bulgarian worked tirelessly and his instinctive touch led directly to Evra winning Giggs' first penalty.

Berbatov is always going to be judged alongside his price tag, but to suggest he does not care is an insult. Maybe it was a symbolic gesture when he stopped to roll his sleeves up in the first few minutes, and there was more than enough passion on show to please Ferguson.

For Spurs, this represented a huge disappointment, a squandered opportunity to take advantage of a United side stripped of Rooney and Rio Ferdinand. History tells us this is the sort of chance they make a habit of missing, given their wretched record of 67 away matches without a win against the so-called "Big Four." 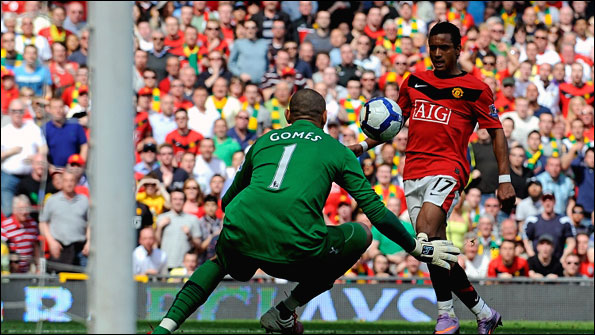 Nani has grow in stature for Man Utd this season. Photo: Getty

Hopes of an unlikely win flickered after King's leveller, courtesy of another grim example of Michael Carrick's flimsy defending, but Spurs did not produce enough to claim even a point.

Harry Redknapp knew as much and sounded like a flustered General Election pollster as he talked about the possibility of "a nine point swing in a week" that may yet see Aston Villa emerge as a contender for the top four if they beat neighbours Birmingham City.

Redknapp was in the mood to make one bold prediction with some certainty, namely that he believes Fabio Capello will not resist the temptation to take his captain Ledley King to the World Cup.

Unlikely as it seems given King's unreliable fitness record, watching this imperious defender in action at Old Trafford was enough to make anyone wonder about this possiblity, given the uncertainties surrounding Rio Ferdinand and John Terry. The bigger gaps between games that will allow him recovery time is also a prime consideration.

King's ability to emerge periods of enforced inactivity and play to the highest level - one first-half block from Berbatov was from the top drawer - not only marks him out as a freak of nature but also makes you wonder what might have been had he been blessed with good physical health throughout his career.

To the untrained eye King appears, even now, to nurse himself through periods of games and this may yet force Capello to ignore his claims, but he is an operator of the highest class and a huge influence when he is fit enough to take the field.

The disappointment felt by Spurs at this defeat, and performance, will be soothed by the statistic that states six points is a respectable return from three games in swift succession against the top three.

United will now chase six points from their visit to Sunderland and a last day meeting with Stoke City at Old Trafford - and the sort of spirit shown by Evra and Nani will stand them in good stead for the shredded nerves of the final fortnight of this campaign.