Bayern Munich's trademark communal bow in front of their ecstatic fans at Old Trafford brought the final curtain down on an era of English domination in the Champions League.

Ferguson raged at the "typical Germans" who urged referee Nicola Rizzoli to dismiss United defender Rafael in one of the defining moments of a thriller marked by fluctuating fortunes.

The "typical Germans" in question happened to be Franck Ribery and Mark van Bommel, who were French and Dutch last time their passports were checked. It was a confusing night admittedly, but Ferguson's remarks did him no credit.

What is beyond dispute is that Bayern's victory on away goals further releases the stranglehold the Premier League's so-called "Big Four" have exerted on this competition, with no English representative in the semi-finals for the first time since 2003. 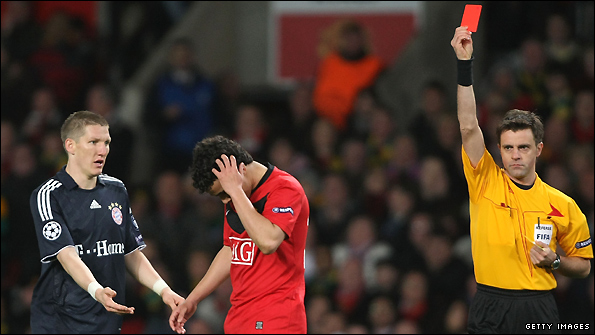 Rafael is given his marching orders by referee Nicola Rizzoli

And as United followed Arsenal out of the competition, Ferguson was left to reflect on a gamble that looked a winner all the way for 43 minutes but ultimately failed to pay off, and to focus on how to achieve five wins that may, or may not, bring him a fourth successive domestic title.

As Ferguson pointed out in the opening lines of his programme notes: "Just when everything in Europe seemed to be going so smoothly - the kick in the teeth came!"

He was referring to United conceding two goals that resulted in a first leg defeat by Bayern in the Allianz Arena - but the message applied even more painfully here.

Having said he would not risk Wayne Rooney only the day before, Ferguson contradicted himself by handing the England striker a starting place - but it was a decision that galvanised Old Trafford and a United team injected with pace in the shape of Rafael, Nani and Antonio Valencia.

As well as confirming Rooney's importance, it perhaps also emphasised the lack of faith Ferguson has in Dimitar Berbatov, who was shunted back to the bench after last Saturday's defeat by Chelsea.

How Ferguson's gamble allowed him to cash in his chips early on. Rooney set up Darron Gibson for the first, fed Valencia to set up Nani's second. When the Portuguese added the third before the interval it all looked plain sailing.

Rooney, however, had already shown signs of frailty. He never looked fully fit at any point, and his problems increased when he twisted his ankle again and limped painfully for several minutes before resuming, albeit with vastly reduced effectiveness.

If this was an ominous sign, the real unravelling started when Ivica Olic was allowed to score just before half-time. In this single careless moment hapless Bayern were revived. The whole mood of the tie, and indeed Old Trafford, altered instantly.

And when Rafael was sent off, correctly despite Ferguson's anti-German sentiments, all bets were off. The fast-fading Rooney was removed to allow John O'Shea to plug the gap left by the red-carded youngster.

All the impetus had shifted to Bayern and it was no surprise when Arjen Robben quite sumptuously volleyed the decisive second away goal with 16 minutes left. With Rooney watching from the bench with only an ice pack for company, United were bereft of ideas and Bayern survived with ease.

Any gamble is only judged by its end result. This one ended with Rooney aggravating his injury and United out of the Champions League, so it was a failure.

Ferguson and his team produced much to admire but came up short over the two legs - and there was no disguising the Scot's pain as he very obviously regarded this as an opportunity that got away.

He also forgot the score, wrongly claiming: "It's unusual for our club to lose three games." You knew exactly what he meant though - rarely could victory have tasted more like bitter defeat.

As Ferguson nears the day when he will have to take tough decisions on his older brigade of Gary Neville, Paul Scholes and Ryan Giggs - all left out of the starting line-up here - he could at least draw comfort from the efforts of his emerging players.

Rafael was youthful exuberance personified before he was sent off. Valencia tortured poor Holger Badstuber and Nani took his development to another level with a performance that delivered pace, persistence, skill and bravery as well as two goals.

They will be small crumbs for Ferguson after he set his heart on avenging defeat in last year's final against Barcelona. He will still regard the two Champions League wins during his reign as a poor return. 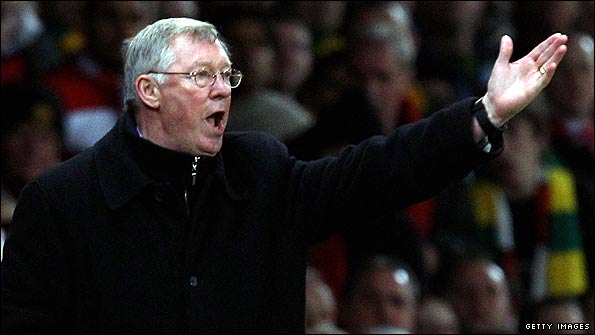 United have never totally convinced in the Champions League this season apart from the imperious dismissal of an ageing AC Milan - and the departure of the last big beast completes a chastening tournament for England's finest.

It is hardly crisis time for the Premier League, but it is a matter of some significance that the semi-finals will be fought out by teams from Spain, Italy, Germany and France.

There is little doubt there has been a decline at the top of the Premier League this season, as proved by the see-saw nature of the title race and defeats suffered by those who despite that, continue to dominate.

And there has also been a closing of the gap from the competition around Europe, resulting in the complete absence of English teams in the last four.

Liverpool failed to navigate their way out of the group phase and Chelsea were comprehensively outmanoeuvred by Jose Mourinho's Inter Milan. The battle between the Premier League's purists Arsenal and Europe's artists Barcelona was embarrassingly one-sided, and while Bayern may have ridden luck at Old Trafford on Wednesday, they won the first leg deservedly.

Ferguson, even in defeat and a top-flight wipeout in the Champions League, clung to the old beliefs. "I don't think it casts a shadow over the game. I still think it's the best league in Europe," he said.

The words sounded like a reflex action and he may not have found too many to agree with him as Bayern's celebrations echoed in the background.

It has been the worst week in Ferguson's recent footballing memory, with a defeat to Chelsea that cost United the Premier League leadership sandwiched between the games that unhinged their Champions League hopes. If United's fail to win the title, Ferguson will have plenty of food for thought to digest on his summer holiday.

The great Lothar Matthäus once claimed football is a simple game where 22 men run around for 90 minutes and then the Germans win, just as they did here - even when they lost.

Hardly back to the drawing board for those so keen to champion the Premier League's supremacy, but a sobering lesson nonetheless.