Arsene Wenger's lavish boast that Arsenal's Champions League meeting with Barcelona would illustrate "the art of football" came to fruition as a masterpiece was unveiled at the Emirates.

Barcelona provided brush strokes of rare beauty, especially in a mesmerising opening 25 minutes that will be imprinted forever in the memory of those of us privileged enough to witness it at close quarters.

Coach Pep Guardiola, with the Nou Camp's principles coursing through his veins, disguised his disappointment at conceding a two-goal lead to declare: "I am proud of my team. We won the Champions League last season but we never played like that away from home. Never."

Arsenal provided few of their trademark flourishes, and the final score was an absurdly inaccurate reflection of the gulf in class between the sides. There should, however, be pride for Wenger in the strength, spirit and courage of his team.

No-one epitomised those qualities more than captain Cesc Fabregas. Very obviously less than fully fit, he survived the blow of picking up a yellow card that ruled him out of a return to Barcelona to seal the unlikeliest of draws for Arsenal with what may be his final meaningful contribution of the season. 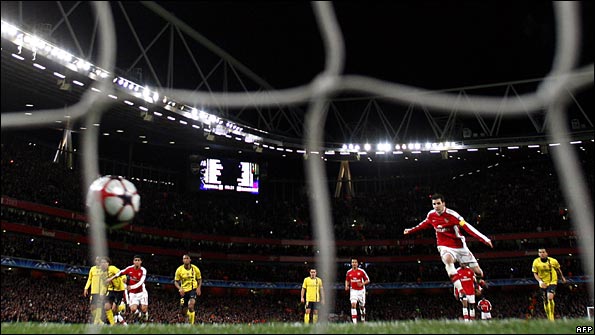 Fabregas converts his penalty to make it 2-2

Fabregas collapsed to the turf, fearing he had broken his leg, after scoring the penalty that somehow gives Arsenal hope to accompany them on their journey to Catalunya next week. If it is his last serious kick of the campaign, he went out in style.

It was the final act of drama on what Wenger correctly labelled "a great football night. An exceptional football night". And a night when Arsenal defied logic to keep themselves alive.

They will need to do it again in the Nou Camp because they sustained some serious damage around the edges here. Fabregas and William Gallas fear their seasons have reached a premature conclusion while Andrey Arshavin did not last the first half after suffering a calf injury.

Barcelona will be overwhelming favourites to progress, but football is not a predictable game. The second leg should already be a formality - and Wenger knows his side somehow escaped an almighty mauling on Wednesday.

The statistics tell the tale of how Barcelona dominated. When was the last time Arsenal only had a 38% share of possession at home? Barcelona also completed 533 passes to Arsenal's 265.

Sir Alex Ferguson, in the build-up to last season's Champions League final defeat against Barcelona, claimed Xavi "has never given the ball away in his life". The midfielder was not about to start against Arsenal.

Lionel Messi sent an ominous hush over the Emirates with a surge of acceleration after only 30 seconds, but the great Argentine was relatively subdued. It was Xavi who kept the machine ticking.

Manuel Almunia had the half of his life to keep Messi, Sergio Busquets, Xavi and Zlatan Ibrahimovic at bay. The latter also missed an open goal, but Barca were beautiful to watch. Pace, power, poise, artistry, movement. And world-class players willing to work as hard off the ball as they did on it.

They know and appreciate their passing football at the Emirates, but they may not have seen anything as good as this.

Barcelona had apparently dominated 75% of the possession after 20 minutes, a dubious figure when the only Arsenal player who had appeared to make any contact with the ball was Almunia.

When referee Massimo Busacca blew the whistle for half-time, there was an audible buzz around the stadium. The Emirates had seen something very special, and yet Arsenal were still in the game.

Almunia scarred his night with an injudicious dash from goal to give Ibrahimovic his opener after just 25 seconds of the second half. And when the Swede added a second on the hour, Barcelona looked set to administer the beating they had threatened in the first half. 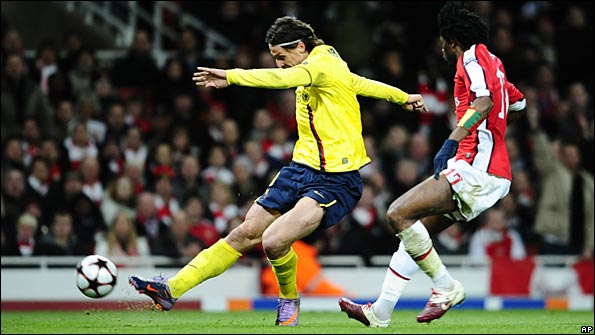 Ibrahimovic scores his second of the nighte

In this moment of desperation, Wenger removed Bacary Sagna and introduced Theo Walcott in front of watching Fabio Capello.

The England coach sees something special in the young flier, and, for any faults he may possess, Walcott has the commodity that strikes fear into all defenders: raw pace. This is why he will be at the World Cup and Capello will use him.

Walcott pulled a goal back and then helped create the opportunity that ended with Carles Puyol red-carded for catching Fabregas as he moved to shoot. The penalty was scored, at some cost to Fabregas and Arsenal, and they go to the Nou Camp all square.

Guardiola, as stylish and impressive as the team he guides, gave full credit to the Gunners and delivered an insight into his philosophy when he abruptly stopped an inquisitor in his tracks after hearing the dirty word "defensive" suggested as a potential Barcelona ploy.

"No", said Guardiola. "There is more risk when you take no risk." And as long as that spirit survives, Barcelona will provide us with the sort of pleasure experienced at the Emirates on Wednesday.

For all Arsenal's gallantry, this may prove an expensive night for their Champions League and Premier League ambitions, but Wenger and his players should take great heart from their contribution.

Wenger is never slow to talk up the spirit in the Arsenal camp, and there have been times when we have doubted him. Not here. Not for a moment.

They could have capitulated after going two down to Guardiola's magnificent team, but Arsenal found it within themselves to fight back and were chasing a miracle in the closing minutes.

All odds favour Barcelona to go through, but Arsenal defied a few to match Guardiola's side in the scoreline, if nothing else, at the Emirates.

It was, as Wenger predicted, a game for the connoisseur and a purists' delight.