Carlo Ancelotti's expression of choice is poker-faced - and he revealed the gambler within as Chelsea struck what may yet prove to be the title race's decisive blow at Manchester United.

All logic suggested Ancelotti would respond to the absence of Manchester United's injured inspiration Wayne Rooney by restoring his own master marksman, fit-again Didier Drogba.

Ancelotti resisted the temptation and boldly kept Drogba exactly where he was during the 7-1 demolition of Aston Villa, on the bench. The Italian's left eyebrow is permanently raised, and the expression was mirrored among Chelsea followers when his selection was revealed.

The ploy was an unqualified success, with Ancelotti able to leave Old Trafford celebrating a win that was as much a personal triumph for the Italian as it was for a Chelsea team that has regained control of the Premier League title race with only five games left. 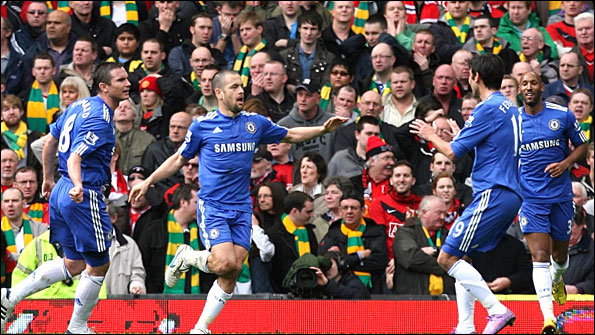 Joe Cole's season has been disrupted by injury - photo: PA

Ancelotti put his reputation on the line by keeping Drogba under wraps at the start, no doubt well aware of where the finger of blame would point had Chelsea failed to secure the win they needed.

The faith he placed in the Chelsea side that thrashed Villa was handsomely rewarded with a deserved three points - and when Ancelotti needed it, fortune favoured the brave in the game's defining moment.

Drogba was introduced for Nicolas Anelka with 20 minutes left as United were finally gathering some sort of momentum after struggling to exert any authority on Chelsea, who led courtesy of Joe Cole's early goal.

United's faint hint at a revival came to a shuddering halt as Drogba thumped home the second, despite receiving Salomon Kalou's pass in an embarrassingly offside position.

Chelsea claimed an injustice of their own when Federico Macheda set up a frantic finale with a goal that went in via his hand - but the more vehement protestations were United's and rightly so.

It capped a tough afternoon for referee Mike Dean and his fellow officials. Dean, who was rightly criticised for incorrectly awarding Blackburn a penalty at Burnley last week, was tested again as he refused respectable claims for spot-kicks from both sides.

Let no-one doubt, however, that this game got the winners it deserved. For the most part Chelsea, inspired by the outstanding Florent Malouda, were the more composed, ordered and dangerous team.

And it delivered an ominous signal for the remaining games that Ancelotti felt confident enough to leave Drogba out from the start and still claim three points, while United struggled desperately to find any rhythm or serious threat in Rooney's enforced injury absence.

United, who lost at Everton after a midweek Champions League win against AC Milan, looked heavy-legged and laboured following their defeat to Bayern Munich in Germany.

It would do a grave disservice to Chelsea to simply attribute this win to United's fatigue. This was an impressive demonstration of the renewal Ancelotti has presided over since a dismal few days when they went out of the Champions League to Inter Milan and drew so tamely at Blackburn. 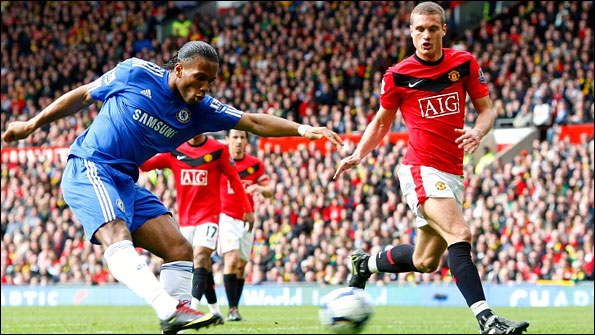 Didier Drogba started on the bench, but came on to score the winner- photo: AP

Chelsea played with confidence gained from 12 goals against Portsmouth and Villa, and when United did mount a predictable surge after Macheda's goal, the old resilience was on show.

Malouda's running and intelligence typified Chelsea, especially in the first hour, while there were some welcome glimpses of the Joe Cole of old - maybe not enough to force his way back into Fabio Capello's World Cup plans, but certainly enough to attract the England coach's attention.

From the invention of his finish at the Stretford End to the creation of a perfect pass that should have given Paulo Ferreira a goal, Cole looked like a man enjoying his game again after a long haul back from a serious knee injury.

Rooney could only watch in frustration from Old Trafford's executive boxes as his importance to United's cause was underlined with every passing minute, and the focus will fall on his replacement Dimitar Berbatov, especially after he missed an injury-time chance to earn a point.

Berbatov deserves a measure of sympathy because many intelligent runs went unrewarded by his uninspired United's team-mates, and for too long he was left isolated as Chelsea dictated possession in midfield.

Sir Alex Ferguson, while condemning the officials, accepted the force was with Chelsea after they claimed these three priceless points, but the twists that have characterised this season means United must not be dismissed.

Rooney may return for the Manchester derby in a fortnight and Ferguson's prediction that the race may not be concluded until the final day of the campaign still holds good. United have come back from worse positions than this and Arsenal's latest dramatic late escape against Wolves keeps the pot bubbling.

But Chelsea now have one of football's most precious commodities - momentum. And much of the credit for their return to prime position in the Premier League goes to Ancelotti.