Sad for Beckham - but not England

The debate about David Beckham's place in England's World Cup squad is over. The question now is whether he will ever grace the highest level again.

As someone who consistently stated he should have no place in Fabio Capello's plans for South Africa, it would be hypocrisy on a grand scale to join the mourning that greets his absence after the serious Achilles tendon injury sustained playing for Milan against Chievo.

This, however, is the professional context. The personal part of this story dictates there must be sadness and sympathy for a consummate professional who had set his heart on becoming the first player to represent England at four World Cups.

Beckham will be understandably devastated as he flies to Finland on Monday for surgery on the injury every player dreads. It can strike at any time, often without an opposing player in the vicinity, as befell Beckham on Sunday, and can have career-threatening consequences.

And the biggest heartbreak of all will be the knowledge that he is unlikely to add to his 115 England caps. The dream conclusion to his career, holding the World Cup on 11 July in Johannesburg's Soccer City, will remain exactly that.

Beckham has shown remarkable powers of endurance before, rebuilding his England career after being exiled almost as a cosmetic exercise by then coach Steve McClaren following his resignation from the captaincy in tears in Baden-Baden after the World Cup exit in 2006.

This injury means there will be no more England comebacks. 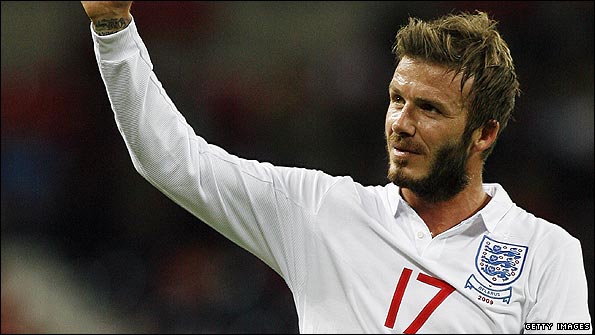 He harboured ambitions of making one final significant contribution at a major tournament. Destiny, he hoped, would allow him to make up for his sending-off against Argentina at France 98, the injury-hit performances in Japan in 2002, the missed penalties and mediocrity of his showings in Portugal two years later and a relatively low-key contribution in Germany.

It was always a fanciful notion given his age and fading powers, but such is the reservoir of goodwill that remains for Beckham among England's followers that no-one would have begrudged him. Now he will not even take a place in the ranks as Capello prepares his troops to begin their campaign against the United States in Rustenburg on 12 June.

Beckham has willingly embraced the cult of personality and publicity, something which has not always sat easily. Only last Wednesday he showed his undimmed flair for promotion by draping himself in the green and gold scarf that is the symbol of the anti-Glazer protesters at Manchester United. Cue cameras and headlines.

In his defence though, he was more than prepared for the trade-off. Beckham has always been unfailingly polite with fans on England duty, even when we witnessed the almost suffocating adulation he was subjected to in Japan. He dealt with this attention with patience and dignity, adding to the popularity of the national side.

Beckham was the perfect ambassador for the England football team, although this was used by many of his supporters as almost the sole reason to justify his inclusion in South Africa.

Even now, having outlived his usefulness as a starter for England, he remains their most enduringly popular figure. Most of his recent international career has consisted of cameo caps and brisk trots down touchlines around the world, and yet they were always greeted with the loudest cheers, as against Egypt at Wembley recently.

And he will have moments that will deservedly warm him if this is the end of his elite career, such as the last-minute free-kick against Greece at Old Trafford that took England to the 2002 World Cup and the penalty against Argentina in the surreal and futuristic surroundings of Sapporo's Superdome in Japan.

England supporters revelled in those magical moments, whether they bought into brand Beckham or not.

When understandable sentiment and sympathy is set on on one side, what are we left with in the footballing context?

We are actually left with the brutal reality that England have actually lost a fringe squad player, someone who - barring exceptional circumstances - would not have started any game at the World Cup. This should not be forgotten should anyone wish to portray Beckham's injury as a serious wound to England's aspirations.

South Africa's conditions will lend themselves to the pace and thrust provided by the likes of Theo Walcott and Aaron Lennon, although the fact that the Spurs winger is still struggling for fitness should be a matter of greater concern to Capello than Beckham's absence.

Capello the pragmatist, given the choice, would take a fit Lennon over a fit Beckham and injury clouds over Ashley Cole and Rio Ferdinand are much more likely to make him rest uneasily.

Beckham was never big on acceleration, even in his pomp, and that has gone now. Could he have hurt the serious opponents England will hope to face in the closing stages of South African combat? I was never convinced.

And with Capello insistent he will play two strikers, thus consigning Steven Gerrard to his England role of moving in from the left side, serious thought must now be given to using Aston Villa's James Milner on the right if Lennon fails to recover and Walcott cannot rediscover his spark.

Milner can provide quality from that flank and has the adaptabilty that will make him a huge asset for England this summer. Sad though Beckham's injury is, it should not represent anything other than a minor concern for Capello as he crystallises his thoughts about his final squad.

And as the Beckham door closes, who is to say one may not open for an unlikely name? What about Manchester City's gifted Adam Johnson? Capello may focus his gaze on him more keenly now.

Those struggling to make a judgement call on whether Beckham should go to South Africa fell back on the default option that he would be "good to have around the squad." Fair point and he showed a humility in being happy to go back to being a squad member after relinquishing the office of captain. But these players are all seasoned professionals and the most important counsel they receive will always come from Capello, not Beckham.

Before this injury, I would have left Beckham at home anyway because England have to be confident enough about themselves not to feel the need to include someone purely on the basis they might win a free-kick or corner in a dangerous position.

As I have stated before, my respect for Beckham the professional has never waned, especially after the way he fought back to play for England again after watching him leave Baden-Baden in tears, but his time as a significant international influence had gone.

This purely footballing verdict should not preclude us from feeling sadness for Beckham that the target he has aimed pretty much all of his recent career at has been snatched away so cruelly in a second at the San Siro.

For England and Capello, however, it means the world can finally move on without David Beckham.