Phil Brown survived publicly murdering the The Beach Boys classic "Sloop John B" at the KC Stadium - but upsetting the Women's Institute as they marched across the Humber was a bridge too far.

Tony Blair counted the cost of crossing the WI during his time as Prime Minister. So what chance did Brown have after being forced to apologise to this revered organisation when a rally was interrupted by fisticuffs between those two unlikely pugilists, Jimmy Bullard and Nick Barmby?

This, followed by an unfortunate defeat against Arsenal on Saturday, provided an almost surreal conclusion to the eventful, but not exactly unsuccessful, reign of Brown at Hull City.

Brown came through the trauma created by his crooning at the end of last season, but was on borrowed time once former chairman and great ally Paul Duffen departed, to be replaced by Adam Pearson.

Pearson was always going to be a more pragmatic operator and it was no coincidence that Brown's previously high, some critics said too high, profile was drastically reduced following his return to the club. At least it was until he was forced to return to the harsh spotlight with his embarrassing apology for his players last Friday.

Hull's run-in offers hope of survival, and with Pearson recently stating that staying up could be worth around £100m, it is clear to see the logic in acting now to provide fresh impetus as Brown struggled to galvanise his squad, let alone keep them apart during their warmdown.

It brings the curtain down on Brown's turbulent time at Hull - and when examined in isolation, a manager who became a derided figure in many quarters has plenty to be proud of as he takes his "gardening leave".

Brown took Hull City into the top tier of English football for the first time in 104 years then kept them there. And even as he departs, they still have a chance of staying in the Premier League for the second successive season.

Hull are, however, deep in a relegation battle and grasping to find the wins they require. Pearson has felt the need to act before it is too late and Brown has paid the price. 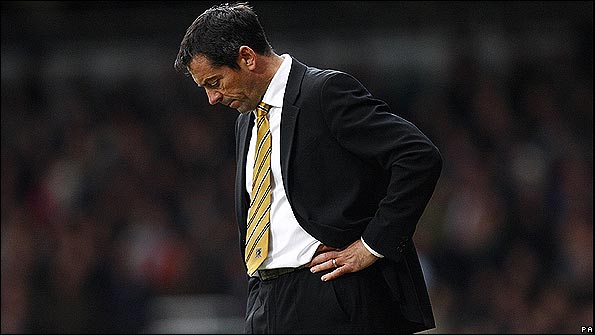 He has not had a great deal of help from Lady Luck latterly, especially with the knee injuries suffered by key signing and midfield inspiration Bullard. This judgement must be shaped, however, by the fact that the player had endured serious fitness problems even before Brown did the deal.

But performances such as those in defeat at Everton, coupled with the training bust-up Brown optimistically passed off as a sign of the spirit inside his squad, were obvious indicators all was not well and left him vulnerable to the decision Pearson took on Monday morning.

Brown has been unable to build on survival last season, failing to entice targets such as Michael Owen in the summer and losing influential defender Michael Turner to Sunderland.

If Hull's fans had been promised survival at the start of last season, Brown would have been afforded hero status. If he was guilty of anything it was by elevating expectations to ludicrous levels with a start to the season that saw Hull win at Spurs and Arsenal and draw at Liverpool.

There were, it must be said, signs that Brown and chairman Duffen had - to put it politely - got carried away with those early successes.

The eventual decline, and some of Brown's management techniques during it, was spectacular and too often played out in public view, not least when Hull were thrashed at Manchester City on Boxing Day 2008.

No matter how much Brown will argue against it, the rot set in on the turf at Eastlands with Hull 4-0 down at half-time. No-one enjoys public humiliation, but this is what Brown effectively chose to inflict on Hull's players by dragging them across to a corner populated by their own supporters, waving briefly before delivering a grandstanding, and very public, dressing down.

Brown insists it had no serious impact on team morale, but a dismal sequence of results since that ill-advised act suggests otherwise. If it was a move designed to inspire, it backfired.

It carried all the appearance of a show put on for the benefit of Brown and Hull's fans, with a group of players who had performed magnificently at Liverpool to get a draw only a fortnight earlier acting as the fall guys. They deserved better.

Brown's extrovert personality also appeared to provoke and antagonise opposition fans rather than inspire the affection Hull's passionate and vociferous following deserved. What was initially viewed as endearing eccentricity eventually came to be regarded as an ego out of control.

In Brown's defence, whenever I encountered him at press conferences he was entertaining, engaging, honest to a fault and never dodged a question - and yet he has caused many to revel in his downfall.

Instead of laughter at his singing or his stated intention of jumping on his Harley-Davidson, tie on a bandana and celebrate his 50th birthday by doing an "Easy Rider" down to the south of France, he became a figure of derision.

This should not have mattered one jot because football's history is littered with maverick and outspoken personalities, but once Hull's form went into meltdown the fact that Brown had pushed himself unashamedly to the forefront made him first in the firing line.

I well recall Hull's game at Chelsea on the opening day of the season, when his trademark headset made him a target for the home supporters, one of whom constantly bellowed a series of imaginary orders while claiming Brown was actually a call centre manager who had wandered into Stamford Bridge in error.

Brown took that on the chin, and there has been a tactical withdrawal from the limelight in recent months.

It was an uncomfortable, embarrassing moment though when a Premier League manager was forced to offer heartfelt apologies to the Women's Institute - he must have felt the credits were rolling on his Hull career as the words passed his lips.

He should go with the best wishes of Hull fans. Brown, whatever his critics might say, has given them some of the times of their lives in the last two seasons.

Brown will be bitterly upset that he has been ousted, but if he wants to call on his experiences to see him through this tough time, he will no doubt remember that his finest hours at Hull came after a brief spell at Derby ended in the sack.

He will no doubt return a wiser - and undoubtedly more low-key - figure when he takes up his next post.

And the fact the he was the man who took Hull to the promised land of the Premier League will not look that shabby on his C.V.