Jose Mourinho wore an unfamiliar mask of modesty as he showered Chelsea in respect on his return to Stamford Bridge. To no-one's surprise it did not last.

Stroll into Stamford Bridge's Centenary Hall, take a left turn towards the Chelsea museum, and a message is painted loud and clear in blue and white on the wall: "I am not from the bottle. I am a special one."

Sitting just a few yards away was the man who uttered those famous words on his appointment as Chelsea manager in June 2004. And he was only too happy to deliver a reminder to his former employers on his comeback with Inter Milan in the Champions League.

Mourinho was pure theatre, even when trying his best to avoid the below the belt verbal jabs he has made his stock in trade out of deference to Chelsea. After 30 minutes of almost stone-faced restraint he could resist no longer.

On the differing paths taken by Mourinho and Chelsea since they parted ways in September 2007, he said: "I keep winning important things. They keep winning something."

Go on. Why don't you just say it Jose? Only the FA Cup since you left while you have added the Serie A title since moving to Inter Milan. He had proved he can do modesty - he just can't do it for very long.

It was a brief slip into the old agitating Mourinho. He retains such affection for Chelsea, and just about everyone associated with them, that he insisted there will be no outward celebrations should Inter score, or successfully defend their 2-1 lead from the first leg.

Mourinho is box office, and there is no subtlety in his showmanship. He sent in the unlikely figure of Marco Materazzi as his warm-up act, then had the gall to interrupt "The Matrix" by tapping his watch and telling him to move it along. 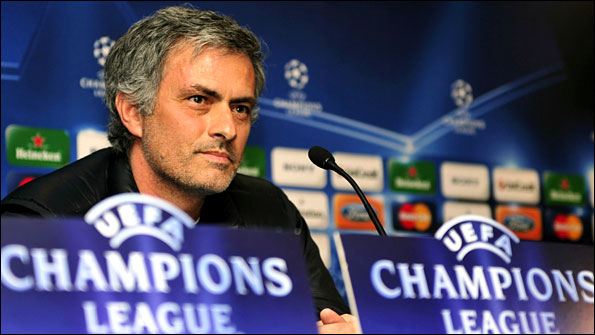 As he finally took centre stage he was illuminated by flashbulbs. Every move, whether it was taking a drink, waving a hand or even demolishing a plate of his favourite custard creams that had been provided for him, was accompanied by the clicking of cameras attempting to capture that special shot of "The Special One".

Mourinho was in his element, ever the divisive figure enjoyed by the British media but taken with a very large pinch of salt by their Italian counterparts.

Wearing a black, glistening body warmer that made him look like an ageing biker, Mourinho doused anyone and anything associated with Chelsea in spoonfuls of sugar while at the same time insisting the only thing that would make his Tuesday a special one would be an Inter win.

It was a delicate balancing act. And just to make sure the sceptics among his Italian audience knew how serious his designs on an Inter win were, he revealed he had watched the dvd of the first leg seven times "going back and forward, stopping, watching again. Seven times."

It was vintage Mourinho, even when trying to keep a lid on the emotions that will be just below the surface when he deservedly receives a hero's welcome at Stamford Bridge on Tuesday.

For those us who still miss Mourinho's presence in the Premier League, he once more provided compulsive viewing and listening. He enjoys the cut and thrust of the relationship forged with the English media during his time at Chelsea. He plays the game and, as usual, ends up victorious.

Mourinho even greeted one familiar questioner with "it's good to see you." You got the impression he will rarely extend the same courtesy to the pack following him from Milan as he accused them of trying to "create a scandal" with their questions.

The impression lingers that plenty in Italy regard Mourinho as a bluffer. They know special coaches when they see them and they have had plenty. In many eyes, Mourinho does not measure up.

They have had Marcello Lippi, Giovanni Trapattoni, Fabio Capello and others who they regard as rather more special than Mourinho - and who come without the circus that follows the Portuguese.

Mourinho's refusal to discuss the exclusion of Mario Balotelli from Inter's squad amid reports of another tiff between the pair was greeted with undisguised exasperation, and even the odd tut-tut, from some parts of the Italian media.

And Mourinho may just have been offering a commentary on his fractious relationship with authority in Italy when he said: "Football is beautiful - in almost every country."

For Chelsea and England there was plenty of love, especially as Mourinho confirmed he will return to the Premier League as he marked out a map for the rest of his career. It will have had a succession of clubs pricking up their ears. 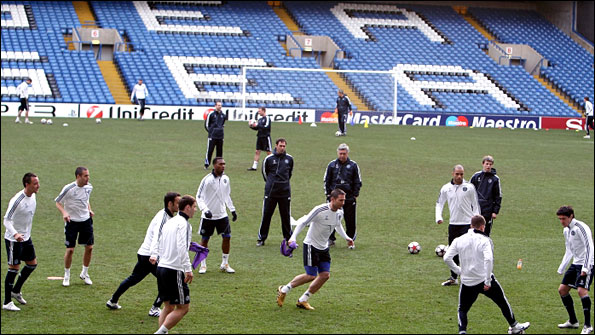 "I have three things to do in my career," he revealed. "The first thing is to be back in English football, another thing is to win the Spanish championship because no-one has won the Spanish, English and Italian titles. And another one, when I am old, is to coach my national team."

There was even praise for Carlo Ancelotti, who has been long regarded as an arch-adversary of Mourinho in the wake of their uneasy co-existence on either side of Milan's footballing divide.

In his final media briefing before leaving Chelsea, he likened top players to eggs and omelettes. The better the eggs the better the omelettes, was Mourinho's theory applied to football.

Asked if Chelsea had let their best chef leave, he was quick to praise Ancelotti, saying: "They have a good chef. They have a chef with experience and a chef who knows the ingredients football needs."

Mourinho rounded things off by discussing one of his favourite subjects. Himself. And by then the facade of modesty was long gone.

Will he still be "The Special One" after Tuesday's game? He replied without hesitation: "Of course. After the game I will be 'The Special One' win or lose."

Mourinho will always be "The Special One" at Stamford Bridge. It must be true. It says so on the wall by the museum he decorated so lavishly with silverware.