Mourinho still master at the Bridge

Chelsea's fans did the unthinkable and turned on Jose Mourinho amid the dying embers of their latest failure to win the Champions League.

It was only a noisy minority, but in their fury and colourfully-expressed frustration they were paying the biggest of back-handed compliments to "The Special One" they once idolised.

This is because Mourinho's meticulous preparation, and masterly execution, of Inter Milan's victory that sent Chelsea out in the last 16 showed his former club exactly what they are missing.

Mourinho celebrated victory by polishing off more of his beloved custard creams - but the manner of Inter's deserved win would have felt more like a custard pie to Chelsea coach Carlo Ancelotti and owner Roman Abramovich.

Mourinho reeled off the story of Chelsea's doomed attempts to win European club football's major prize after Inter made it look further away from realisation than at any time in their recent history.

Grim reading - and the really bad news for Chelsea is that on the evidence of Tuesday's first knockout round exit these Champions League hard luck stories might be as good as it gets for some time.

Mourinho insisted he would still be "The Special One" whether Inter won or lost, but the arrival of Inter's teamsheet was the first sign that he did not regard defeat as a serious option. 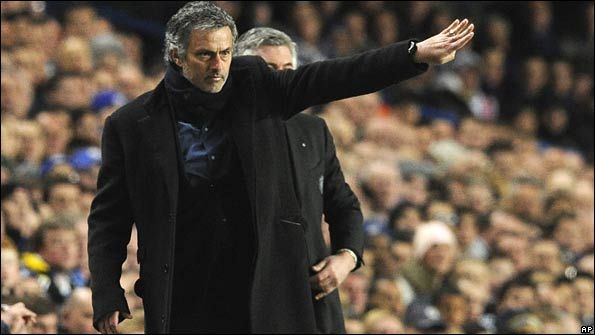 He fashioned this win during seven dvd re-runs of Inter's first-leg win, rewinding and reviewing his machine into exhaustion until the plan was perfected. It was time well spent as he once again gave the lie to any remaining doubters. He is style, substance and, most importantly, success.

Mourinho explained "creating doubts for Chelsea" was at the heart of his plot. And by fielding an attacking line-up he spooked Ancelotti's side to such an extent that they never fully settled to their task.

He shed the cloak of conservatism to use a three-pronged attack. Samuel Eto'o and Goran Pandev were employed to work the flanks with Diego Milito through the middle, with all supported by the wonderfully rejuvenated Wesley Sneijder.

Chelsea had occasional periods of pressure, but Inter's persistent threats of that crucial away goal allied to a defence that was fiercely protective of keeper Julio Cesar ensured Mourinho's men were superior in all departments.

The man himself took centre stage as ever. He emerged into view for the first time, with perfect timing, signing autographs to the strains of Rainbow's "Since You've Been Gone".

And when the action started the old ham went through all his various stages of over-acting and pantomime villainy. Every perceived injustice was greeted with extravagant gestures, and when Chelsea wanted to take a quick throw Mourinho did just enough to ensure it was beyond them.

Mourinho promised not to celebrate if Inter scored, but when Eto'o completed the formalities of their passage into the last eight with an expert late finish, he could not quite help himself.

The swift fist-pumping was as extravagant as it got - but there was no disguising this was a huge victory for him and Inter, who have spent years stalling at this stage. At the final whistle he was away down the tunnel, breezing in for his post-match inquest with his head, not to mention his hair, held high.

Chelsea, as ever in the Champions League, raged at perceived injustice. It is always the way, it seems. They can back their case for victimisation with a penalty not given to Salomon Kalou in the first game in the San Siro and another open-and-shut case here when Didier Drogba was dragged to the floor by Walter Samuel.

Ancelotti was gracious in defeat and refused to grasp at excuses. The reality, and he knew this, was that Chelsea lost to a better team. Inter were more tactically astute and Chelsea never at any stage had the wit, guile and ideas to progress in the face of Inter's excellence.

Chelsea were pedestrian in midfield, where Inter's Estebian Cambiasso manned the barricades superbly while Lucio's defensive diligence drove Drogba to distraction. They were one-paced, never building any momentum, with Michael Ballack a cumbersome non-presence, one early shot apart.

As ever, Chelsea's Champions League exit was accompanied by an example of Drogba's flawed temperament. To the red card against Manchester United in the Moscow final and the shameful haranguing of officials and even a television camera after the semi-final loss to Barcelona last season, we can now add another sending off for standing on Thiago Motta's foot.

The reaction was theatrical, many were, but Drogba's indiscipline was the stand-out symbol of a night when Chelsea's dreams were dashed once more.

Champions League success is Abramovich's long-held dream, but how much longer can this familiar and time-served Chelsea line-up keep going to the well and coming back empty handed? How many more blows of this sort can they take?

They still have the Premier League and FA Cup to aim for, but this has been an unfulfilling and ultimately chastening European campaign.

Chelsea, unusually, were overpowered by Inter and Ancelotti's team may be in need of fresh blood if the 2008 final loss to Manchester United is not to represent the peak, if that is the right word, of their Champions League achievements.

The face of captain John Terry, expression almost set in concrete, as he walked away after the game showed how much this hurt. He had been in text contact with Mourinho on the day before the game. If there are more messages flying post-match they will not be happy ones.

Mourinho, as ever, can have the final word.

He admitted: "It was difficult for me to prepare myself to come here as an enemy in the place that has been my home. Perhaps today I am not so special for Chelsea supporters who will never forgive me."

Perhaps it was because Mourinho had proved once again he is so special that many were unable to forgive him as they showered scorn on his team and his approach as they filed away from Stamford Bridge.

But if ever he declared an interest in returning to Chelsea, you can bet they would forgive him in a heartbeat.