As Sir Alex Ferguson expressed his satisfaction at Manchester United's Champions League dismissal of AC Milan, a dark cloud suddenly hovered overhead in the shape of an innocent inquiry about last year's final defeat against Barcelona.

Ferguson's face contorted for a moment before he said: "The Rome final was too hard to explain. You wouldn't understand. We lost a game when we should never have lost it."

And one of the many tantalising prospects left open by the draw for this year's quarter-finals - and a theory already being supported by the bookmakers - is that he might get another chance to right what he feels, whether anyone else agrees with him or not, one of the wrongs of his career with a repeat performance in Madrid in May. 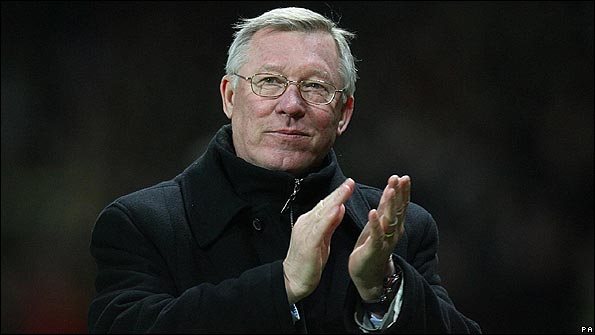 Ferguson, whose cryptic comment about the disappointment of Rome may have centred on some major midfield malfunction in the Stadio Olimpico, will never express anything other than guarded optimism about any draw at this late stage of the Champions League.

He must, however, have danced a little inside when United were drawn against Bayern Munich in the last eight and then presented with the possibility of facing Lyon or Bordeaux in the semi-final if they win.

Expect memories of the pair's epic 1999 Champions League final in the Nou Camp to be revived, although Ferguson will hope United do not leave it quite as late this time to confirm a victory.

Arsenal manager Arsene Wenger may not be quite as satisfied with the hand the draw dealt the Gunners, namely a meeting with Barcelona in the quarter-final and, should they shock the holders, a potential encounter with old adversary Jose Mourinho's Inter Milan or CSKA Moscow in the last four.

But, as we know, Wenger bows to no-one when it comes to having confidence in his team. He will have complete conviction Arsenal can overturn the odds and make it an unhappy reunion with his former club for Thierry Henry.

Wenger, in the aftermath of thrashing Porto in the last 16, stated a preference for meeting either United or the now departed Chelsea in the next round. It was dismissed as bravado by some, but he was deadly serious and will relish pitting his wits against Pep Guardiola.

Arsenal will go into this purists' delight of a game as rank outsiders, but Wenger may see cause for hope in Barcelona's willingness to rely on their trademark stylish passing game to beat any opponents.

When the game is played with these principles as the backdrop, Wenger always fancies Arsenal's chances and this will be no different.

And there will be plenty of sub-plots to keep everyone occupied alongside the obvious attractions of two teams committed to playing what they regard as the beautiful game.

The Emirates will make it an emotion-charged return to Arsenal for Henry. He is rightly guaranteed a rapturous reception as befits a player who scored 226 goals in 364 appearances for the club.

Cesc Fabregas will also attract some attention, with Barcelona regarded as his next likely destination if he leaves Arsenal. If Henry gets a warm welcome back in north London, Arsenal's captain may also get one when he returns to Catalonia.

And if Ferguson feels he has a score to settle with Barcelona, Wenger might be harbouring similar thoughts after Arsenal fell victim to them in 2006 in a final imbalanced by an early red card for Jens Lehmann.

Arsenal, even with a numerical disadvantage, led with only 14 minutes to go until late goals from Samuel Eto'o and Juliano Belletti robbed them of the glory.

Barcelona, rightly, are favourites to win the Champions League for a second year in succession but this will cut no ice with the ever-optimistic Wenger as he plots to stop the seemingly unstoppable Lionel Messi and the "carousel" of a midfield, as Ferguson labelled it, inspired by Xavi and Andres Iniesta.

Nothing is ever certain in football, but if a meeting between Arsenal and Barcelona does not produce moments to drool over then hats will surely be eaten.

If Ferguson had been offered United's potential route to the final before the draw was made by Emilio Butragueno, then you suspect he would have signed up for it instantly.

There must be caution in the message though. Bayern may not be the force they once were, but coach Louis van Gaal is a wily operator and they carry a hefty threat from the coveted Franck Ribery and Arjen Robben.

And they also carry a lot of luck into the quarter-final, with Fiorentina still understandably bitter about Miroslav Klose's late goal that gave Bayern victory in the first leg of their last 16 encounter, the striker so offside that it appeared to blind officialdom to the infringement.

Even if United overcome Bayern, Lyon and Bordeaux have shown they possess enough to pose a threat. Lyon ensured Liverpool made an early exit from the Champions League, while former United defender Laurent Blanc's outstanding work at Bordeaux has even led to him being mentioned as a potential successor to Ferguson at Old Trafford.

And plenty of eyes will be cast in the direction of Bordeaux striker Marouane Chamakh, who is expected to ply his trade in the Premier League at Arsenal next season.

United are now second favourites behind Barcelona to win the Champions League, but this is the season of surprises and Wenger will have genuine aspirations of springing another one.