Rafael Benitez has fallen a long way in 53 weeks - from inflicting humiliating defeat on Manchester United at Old Trafford to suffering what might just be the ultimate indignity for a Liverpool manager.

If Liverpool needed any further confirmation that times are hard at Anfield it came in the shape of Sir Alex Ferguson's magnanimous declaration that he felt "a twinge of sympathy" for his old adversary Benitez. This is almost a neon sign that things are bad.

And Liverpool's colourless display in defeat at United - where they won 4-1 in spectacular style last season - was a painful illustration of why Ferguson felt safe in bestowing some uncharacteristic goodwill on Benitez.

The phoney peace between two managers who conducted a public feud last season lasted only 11 explosive minutes at Old Trafford. Ferguson and Benitez were at each other's throats, almost literally, in the technical area as normal service was resumed. 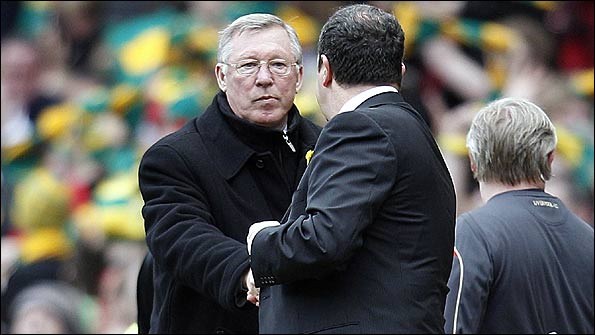 The flashpoint was Wayne Rooney's equaliser after Pepe Reina had saved his penalty, contentiously awarded by referee Howard Webb after prolonged holding on Antonio Valencia by Javier Mascherano.

It came after Fernando Torres revived a recurring nightmare for Rio Ferdinand and Nemanja Vidic by heading Liverpool into an early lead - but that was as good as it got for Benitez and his team.

Benitez leaned heavily on sarcasm in his after-match inquest, especially when it was suggested Ferguson might have used his Friday media briefing to make a psychological point when he claimed Liverpool had been fortunate in disciplinary matters this season.

"Just on Friday? Which Friday? This Friday or every Friday?" retorted Benitez.

"We know the influence of Sir Alex in everything" was another of several sideswipes aimed at Ferguson as Benitez's unhappiness at the penalty award became ever more obvious.

As a shield against Liverpool's current inferiority to United, it did not amount to much and Benitez's suggestion that Valencia had dived to earn the penalty had almost a whiff of desperation.

United were hardly sparkling in victory, sealed by Ji-Sung Park's brave second half header. It was all too tight and tense for that, but they were superior to a Liverpool side whose lack of ambition has become an ugly hallmark of their displays away from Anfield.

True, it was Liverpool's third game in short order and tired legs were an inevitable consequence, but there was an ominous lack of ideas and invention after the hope generated by Torres' towering header.

If the attacking verve and positive intent of last season's victory at Old Trafford was to be a template for title success this season, Benitez has mislaid it somewhere.

Rooney's industry and ability to pull United's strands together, bringing wide men Nani and Valencia into play, was the key to a victory that was greeted with wild celebrations inside Old Trafford as a run of three successive league defeats against Liverpool ended.

Ferguson marched off at the final whistle with some rapid-fire fist pumping to the Stretford End, emphasising that one of the most potentially hazardous hurdles in United's title run-in had been successfully overcome.

Liverpool harboured hopes of being in that shake-up this season - some misguided fools even tipped them for the title - but priorities have been adjusted. As Ferguson helpfully pointed out in his programme notes "they still retain hope of a top-four finish to ensure Champions League football for next season."

Benitez may yet claim silverware in the Europa League, but he and his team have been a massive disappointment and the decline since that superb win at Old Trafford is stark. He now faces a huge fight to fulfil his "guarantee" of fourth place, and what appears to be diminishing faith in his methods will only intensify if he fails.

Steven Gerrard and Torres were the twin towers of last season's triumph as they tormented United. From unconfined joy on 14 March 2009 to abject frustration on 21 March 2010.

Torres has made a habit of terrorising United, and Vidic in particular, but after a blistering start he became bogged down in bickering and banter with referee Webb and the officials that eventually reduced him to a squabbling by-stander. 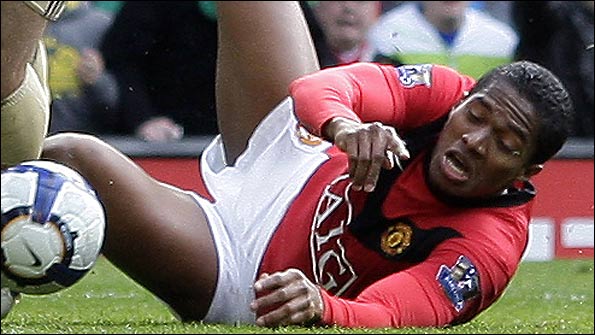 The foul on Antonio Valencia was a crucial moment in the match at Old Trafford - photo: AP

It was to Liverpool and Torres' detriment that he allowed himself to become side-tracked.
Old Trafford lives in fear of this wonderful striker, an audible hum of concern sweeping around the stadium each time he took possession in dangerous territory.

Torres felt the pain of Liverpool's perceived misfortune acutely, going through a full range of angry gestures, petulantly scraping away at the penalty spot before Rooney stepped up and eventually earning a yellow card for a poor challenge on Park.

Whether Torres' cantankerous behaviour was an indicator of wider discontent with Liverpool's plight is open to question, but at least his fired-up approach was in sharp contrast to Gerrard's timid display.

For so long the inspiration, Gerrard was desperately poor, virtually anonymous and unable to provide the support for Torres that unhinged United last season.

With Mascherano and Lucas lacking any creative spark to compensate for Gerrard's listlessness, it meant Liverpool never hinted at any danger until a last-minute chance wasted first by Torres, then Yossi Benayoun.

Jamie Carragher's confrontation with Rooney was a compelling cameo, but Liverpool had too many weak links in key areas to deserve anything from a game that was not rich in quality.

Valencia's rapid development has been a feature of United's return to the top of the Premier League. He shone again - but was grateful for the assistance offered by the hopeless duo occupying Liverpool's left flank.

Emiliano Insua has youth on his side, but clearly not a grasp of positioning and basic defending. The Argentine's problems were worsened by the lack of assistance from Maxi Rodriguez, who is yet to offer any hard evidence to support why Benitez felt the need to sign him in January.

United, and Valencia in particular, probed the flaw ruthlessly and it was no surprise that Park's winner was the result of Fletcher's cross from that vicinity.

Fletcher and Park were crucial components of United's win. The Scot has grown into a highly-accomplished midfield operator, and Ferguson was swift to point out that Liverpool's three recent successes against his side have all co-incided with Fletcher's absence.

Meanwhile, Park's importance to United is underlined by Ferguson's habit of picking him for their most vital games. The South Korean offers work-rate, tactical discipline and now even goals.

At the start of the season, I stated that Ferguson could regard a title win this season as one of his finest achievements after the departure of Cristiano Ronaldo.

He has not replaced Ronaldo - how could he? - but United have already scored more league goals than last term and Rooney's tally of 33 in all competitions has been helped by a constant supply line from the flanks.

This time last year Liverpool looked to have found a formula to mount a challenge to United's supremacy. Not so - and unless Liverpool finish in the top four, Benitez may not get another chance to rediscover it.