Capello on the defensive

Fabio Capello would not have expected an in-depth inquisition about Egypt's threat or England's lack of an official World Cup song. And he was not to be disappointed.

This was Capello on the back foot at England's London Colney training base as he was quizzed about weightier, and highly-contentious issues, ahead of Wednesday's Wembley friendly. The word "Egypt" barely merited a single mention.

Capello's opening salvo was a plea to England's fans not to jeer John Terry, repeating the call made by Wayne Rooney after the Chelsea defender was deposed as captain amid allegations of a relationship with the ex-partner of former team-mate Wayne Bridge.

And so it went on as Capello played out a verbal "catenaccio", mounting a stern defence and hoping to finally bolt the door on the sideshows that have provided a backdrop of off-the-field distractions to the Italian's World Cup plans. 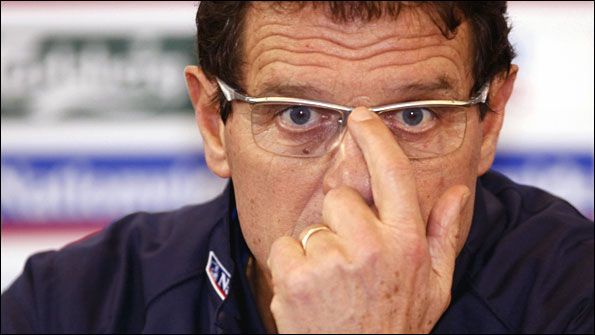 Capello was quizzed about the morals of his squad. Photograph: AFP

England's stand-in captain Steven Gerrard revealed Capello had delivered a "short and sweet" message to the players before their first training session on Monday. Focus on football. Nothing else.

As for Capello, he occasionally showed signs of irritation that he was being subjected to questions on matters away from football - and his body language hinted strongly that he does not expect to have to speak about his players in such circumstances again.

And so it proved as he was asked about the morals of his squad, responding on one occasion by asking an inquisitor; "Why do you have to speak about this for so long a time? Are you interested in the game or interested in the life of the players?"

Capello's problem is that the private lives of some of his players have become of very public interest, so the questions were totally valid.

Nevertheless, he will hope to have killed off further discussion and you suspect any player causing him to revisit this uncomfortable territory can expect to be making alternative arrangements to the World Cup this summer.

Capello was forced to expound his theories on the example his players must set to young and old, as well as and the problems of controlling "young boys, rich boys" in football around the world.

He also confirmed he had watched Terry in training, as well as in Milan and at Stamford Bridge in the last week, and concluded his form was "good" - confirmation that behind the iron mask he is capable of moments of huge generosity.

And courtesy of the man from German newspaper "Bild" Capello was even forced to digest those two staples of any England World Cup build-up - WAGs and penalty shoot-outs.

What is obvious is that Capello has made it abundantly clear that there is now no room for manouevre with England's squad. The Italian only wants to talk football with the World Cup less than 100 days away.

And his frustration will have been increased by the realisation he has more important footballing matters to address than delve into the off-the-field behaviour of England's squad.

Form and fitness have placed a large question mark over England's World Cup hopes. This Egypt friendly is Capello's first opportunity to start finding answers. He will therefore have wanted his whole focus trained on this game, not events he will regard as being firmly on the periphery of his remit as England coach.

Capello has yet to be presented with a convincing case by any of England's goalkeepers, while full-backs Glen Johnson and Ashley Cole have been hit by long-term injuries, Rio Ferdinand's regular presence in central defence cannot be relied upon either, while Terry, whether co-incidental or not, has hit a trough in form after his personal problems.

All these issues will be followed on an almost daily basis by Capello - but he is crystal clear on one tactical matter. Wayne Rooney will never play as a lone striker.

Rooney's magnificent displays as a one-man attack at Manchester United have prompted understandable calls (not least from here) to utilise him in similar fashion with England, pushing Gerrard just in behind.

It will not be happening. Capello made as much very clear, so it is audition time for Emile Heskey, Peter Crouch and Carlton Cole between now and the World Cup.

Capello said: "I can choose one big forward, one small forward. Anything else? Never. My style is always two forwards, with the other one very close."

Surprising, but Capello knows best. It would appear he is locked into the Heskey theory, staking his faith in a striker who does not score goals but sees his obvious flaw outweighed by his overall contribution. 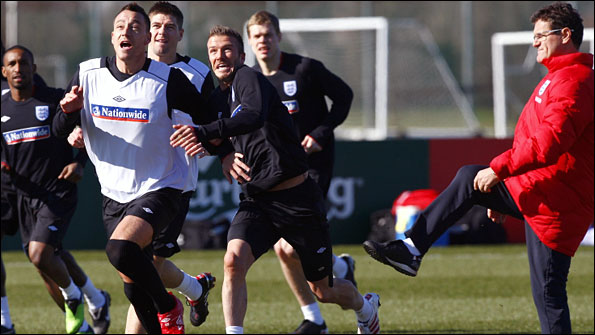 Rooney will be the centrepiece of England's campaign, however, a fact acknowledged in good-humoured fashion by Gerrard when it was put to him that the nation will descend into a form of mourning should the striker fall victim to injury before the World Cup.

"What does that say about all the rest of us?" asked a smiling Gerrard before fully taking the point.

The World Cup fashion parade will also extend to cementing the goalkeeping position, deciding between Aston Villa's Stephen Warnock and Everton's Leighton Baines at left-back and giving Theo Walcott a chance to restate his claims to begin the South African campaign on the right flank.

Capello can turn his total attention back to plotting England's World Cup campaign at Wembley on Wednesday - and you suspect it will come as an almighty relief.