The sight of David Beckham standing at the Stretford End draped in the colours of the anti-Glazer movement crowned just about the perfect evening for Manchester United's fans.

Beckham, for all the glitz, has a sure touch with a populist gesture, and the chance to drape himself in the green and gold scarf that is now Old Trafford's public symbol of protest against the club's American owners was too good to miss.

He may have been wearing AC Milan's shirt, but this simple gesture of solidarity with the dissenters will have surely struck a chord with Avi and Joel Glazer as they watched from the directors' box, although Beckham later claimed the protests were "not my business".

By then, Wayne Rooney had wrapped up Manchester United's place in the last eight of the Champions League, two goals inside 46 minutes leaving plenty of time for those fans disheartened with the Glazer regime to register their discontent.

And they made good use of the opportunity. Thousands of green and gold scarves swirled, giant banners were unfurled and songs were sung.

Beckham's impromptu adoption of the campaign colours as he disappeared down Old Trafford's tunnel for perhaps the last time was merely the final flourish - a public relations coup beyond their wildest dreams from a man who knows a thing or two about such matters. 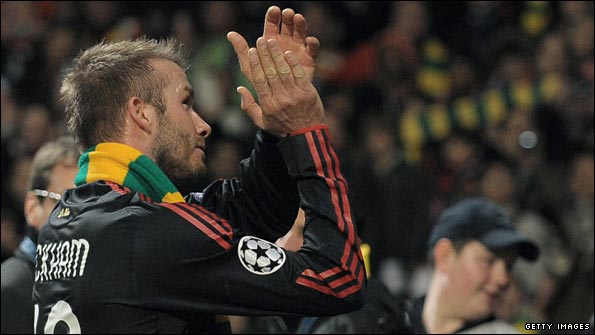 Beckham puts a green and gold scarf around his neck

The movement gathering momentum on the terraces also knows it is now firmly embedded in the psyche of the most important figure at Manchester United, namely manager Sir Alex Ferguson.

Ferguson will not embrace the protesters but he openly acknowledges them, which they will regard as a significant development. He even referred to the protest scarves in his programme notes, although, surprisingly, Beckham did not warrant a single mention.

The campaign against the Glazers has moved up several gears since the announcement of a £500m bond issue in January, which was designed to ease United's £700m debt. This was its most impressive demonstration yet. The use of Beckham as a tool to add further leverage to their cause came as an added bonus.

The evening followed almost the perfect script for United. Ferguson wanted an early goal to dampen any optimism Milan may have harboured about overturning United's 3-2 lead from the San Siro - and Rooney's early header provided it.

He scored his 30th goal of a superb season seconds after the break to release the pressure valve even further. And when the unsung but excellent Ji-Sung Park added a third on the hour, the football business of the evening was more or less concluded.

Old Trafford could then turn its attention to other matters, namely welcoming Beckham for a 27-minute cameo that started with Milan 3-0 down and making its collective feelings known to the watching Glazers.

It was a success on all fronts. Beckham was always going to get the wonderful reception he deserved, all the better for Manchester United fans that they were able to lavish it on him from a position of such strength.

United were on a different plane to this somewhat decrepit Milan outfit, ageing and lacking fight. If there was a worry for those with England's World Cup hopes at heart, it was that Beckham did not make the starting line-up in this fading team.

In Beckham's defence, he posed as much of a threat as pretty much all of team-mates in his short stay, tossing in a couple of teasing crosses and bringing a sharp save from Edwin van der Sar with a stunning volley. It is almost impossible, not to mention unfair, to make a judgement on Beckham in the wider context because the contest was so emphatically over before he even got on.

Beckham's every sprint down the touchline to warm up, plus a few exercises during the interval, was greeted with applause and a flash of camera bulbs. Try as he might, however, he could not overshadow Rooney, who even had the nerve to interrupt one prolonged standing ovation for Beckham by scoring United's second goal. 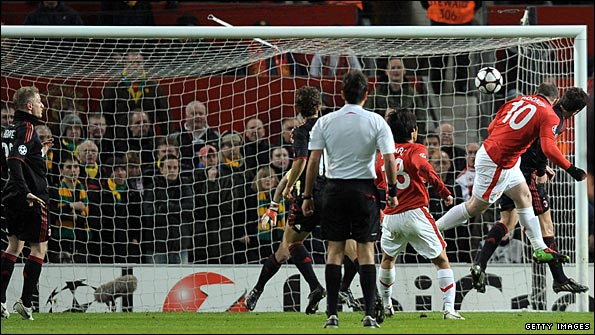 Rooney puts United ahead on the night with another header

Darren Fletcher silenced the protests briefly with United's fourth goal - and the good news just stacked up for United as Beckham's show of support was followed by news from Spain that Real Madrid, Cristiano Ronaldo and all, had been knocked out by Lyon.

We have to say almost the perfect script because, despite the impressive unity of the anti-Glazer lobby, the Americans, who have overseen plenty of success since their takeover in 2005, show not the slightest sign of a willingness to sell. This may change, but there are currently no indications they will.

But the protesters made their point, and it was done without any detriment to the team. A plan to boycott the first 10 minutes of Wednesday's game and leave a swathe of empty seats was wisely ditched, a signal that they are still united with Ferguson and his team, if not the owners.

And why shouldn't they be after the fare United served up last night? United were too quick, too powerful and simply had too many weapons for Milan, who crumbled after a promising opening.

United followed Arsenal in imperiously sweeping aside their opponents, and it was not just the predictable brilliance of Rooney that was at the heart of this display.

Park, as Ferguson so rightly said, played with an intelligence, intensity and selflessness that is his hallmark. He threw a wet blanket over the talents of Andrea Pirlo and chipped in with a goal.

And we even saw Gary Neville, perhaps inspired by the sight of old mate Beckham on the bench, create Rooney's first goal with a cross worthy of the man who played in front of him for so long on United's right flank.

Rio Ferdinand and Nemanja Vidic, while not yet restored to the force of old, provided reassurance in the centre of defence. Antonio Valencia and Nani offered athleticism and thrust down the flanks.

It emphasised that, while Beckham was rightly celebrated as a part of United's glorious past, the present and future belongs to younger talents. It was a pattern repeated all over the field as Milan grew old before our very eyes.

There was talk in the build-up to the game about the famous Milan Lab, the science and fitness centre in the Milanello training HQ where age, it seems, can supposedly be defied. On this evidence, it must have been closed when most of Leonardo's team were scheduled to go through their paces.

Ferguson and United have sights set on making amends for the Champions League final defeat against Barcelona in Rome by marching on Madrid in May. This performance and result will be noted by their rivals.

For Beckham, it was a bitter-sweet return to the place he still regards as his football home, but the great showman still managed to grab the headlines while planting himself even further in the affections of Manchester United's fans.