Carlo Ancelotti chose fine wine rather than fine words to illustrate the scale of his satisfaction with Chelsea's savage statement of title intent. The toast, presumably, was Frank Lampard.

Ancelotti passed up the opportunity to expand on Chelsea's 7-1 mauling of Aston Villa, a handy help to their potentially decisive goal difference after firing five past Portsmouth on Wednesday.

Ray Wilkins, the ever-engaging stand-in spokesman for a silent Ancelotti, said: "Carlo deserves a rest. He's having a nice glass of red."

Villa boss Martin O'Neill looked more in need of smelling salts than Sauvignon after one of his most embarrassing days as a manager - but it was the wonderful Lampard who deserved to have the corks popping after placing himself in the Stamford Bridge Hall of Fame.

Chelsea's main priority was the win they needed as a lever to exert more pressure on Manchester United in the title race. The personal honours, however, go to Lampard and he deserves to be in the spotlight. 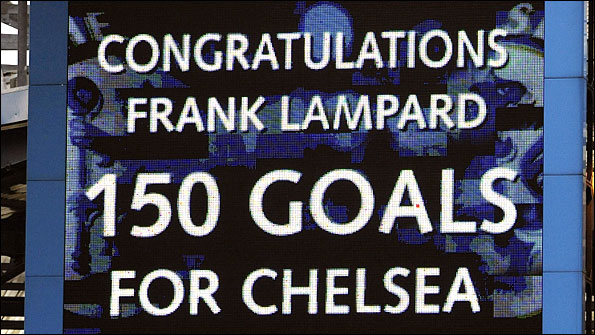 Lampard's four goals sent him ahead of Roy Bentley and Peter Osgood and into third place in the all-time Chelsea goalscoring charts with a total of 151 goals. Only Kerry Dixon and Bobby Tambling are now ahead of Lampard.

The mere mention of those legendary names provides glowing testimony to the record of this remarkable midfield goalscorer, who has repaid the £11m fee Chelsea handed to West Ham United in June 2001 several times over.

Any striker would be proud of Lampard's statistics, but a player who achieves this feat from midfield demonstrates a special talent. It was fitting that Lampard started and finished the goalscoring in a display that suggests reports of Chelsea's demise in the race to win the Premier League might just be exaggerated.

And it was all done without the rested Didier Drogba, who was still able to indulge in some grandstanding with the delirious Stamford Bridge crowd as the goals flew in over his shoulder during a touchline warm-up.

"Didier, Didier What's The Score?" was the question. He knew the answer - but Stamford Bridge also knew that his name would be among the first on the team-sheet for the potentially pivotal visit to Manchester United next Saturday.

Wilkins, an authority on what it takes to flourish in midfield at the highest level, said: "Frank is world class. We have a number of players who you would say are, or are very close to, world class. When you see the goals Frank has scored, and the level he has played to, then you have to say he is world class.

"He has the ability to get forward but also the ability to get back and defend. He is the same in training every day. He trains exactly the same as he plays, and if there are any young kids listening to what I am saying about Frank, then this is the example to follow."

Lampard, incredibly, is still an acquired taste for some supporters - not at Chelsea it should be stressed - with many still questioning his right to a place in England's World Cup team.

This is nonsense, of course. In a season where, and he may even admit this himself, he has not been quite at his best, Lampard remains a potent force - 21 goals in all competitions this season provides the hard evidence. 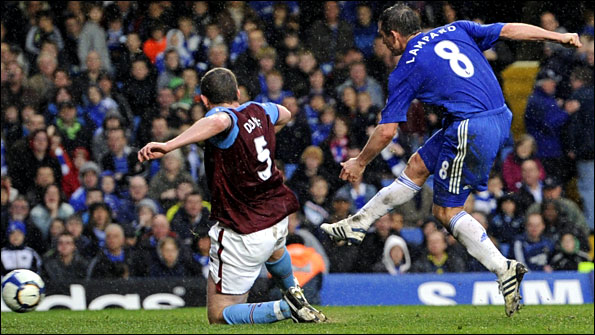 Lampard was helped by Ancelotti's slightly tweaked formation, which suited him perfectly. Nicolas Anelka shone as the lone striker in Drogba's absence, despite not getting on the scoresheet.

Yuri Zhirkov also played his part. And while the Russian's defensive deficiencies were exposed by John Carew's equaliser that gave Villa false hope, his attacking touches were outstanding as he was the victim of fouls for Lampard's two penalties and also created the crucial third goal for Malouda.

Salomon Kalou was Chelsea's other goalscorer as Villa ended beaten, bedraggled and a side that could barely wait to drag themselves away from Stamford Bridge. They looked humiliated - and so they should.

And on an afternoon of Chelsea landmarks, John Terry was able to celebrate his 450th appearance for the club - plus outstripping the mighty Ron "Chopper" Harris by captaining the club for the 325th time - with a win of some significance.

When Chelsea responded to deserved defeat against Inter Milan in the Champions League by only drawing at Blackburn Rovers, a sense of gloom appeared to enveloping their season.

Villa could hardly be placed in the same bracket as Mourinho's Inter, but 12 goals in two games against Portsmouth and a side supposedly chasing a place in the top four states emphatically that there is still life in Chelsea's title bid. And as a platform for the game at Old Trafford, this was built on solid foundations.

United's impressive response at Bolton may have taken some of the lustre off Chelsea's celebrations, but the way Stamford Bridge greeted news of Birmingham's late equaliser against Arsenal was an indicator that they feel battle for the Premier League is very much joined.

Chelsea, for a team you could stake your mortgage on for reliability in recent seasons, have shown an inconsisent streak this season - but when they get it right they are hard to live with, as Villa found out.

O'Neill did not mince his words, describing the outcome as "as devastating as I have had in the game." And for a manager who habitually, and understandably, talks up the talents of his players, he was scathing.

To suggest professional footballers have not tried, or given up when the game is beyond them, is a charge that should not be made lightly and must only be offered up sparingly.

Villa may have been at Stamford Bridge in body for the last 30 minutes, but they were not there in mind and spirit, so we should let O'Neill describe it when he says "at 3-1 we capitulated, which is not like us."

They have a swift opportunity to gain revenge and respectability in the forthcoming FA Cup semi-final at Wembley, but Villa looked leg-weary and numbed by this harrowing experience. It will also spark fears that they may collapse again in the manner which undermined them at this stage last season.

Football being the game that it is, we should not be too surprised if Villa turned this result on its head at Wembley - but words could not do justice to the improvement that would be required to effect this transformation.

O'Neill wisely deflected talk of the effect on Villa's hopes of finishing in the top four when he said: "On that performance we wouldn't finish 44th."

The mood could not have been more contrasting among Chelsea's players - and all the main plaudits were rightly being showered on Lampard.