Everton will not win the Premier League title - but the way they swept aside Manchester United after inflicting similar punishment on Chelsea confirms they are intent on having a decisive say in its destination.

As David Moyes basked in his latest coup, a deserved victory after Everton proved too strong for the champions, he may just have allowed himself to think that a resurgent season could yet yield an unlikely reward.

Everton's hope of finishing in the top four still remains the longest of shots, but their upturn in form since the end of last year means they stand only six points behind Liverpool in fifth place and five behind Tottenham in sixth.

And as Sir Alex Ferguson's champions went the same way as Premier League leaders Chelsea in Everton's last home league game, Moyes will feel a tinge of regret that their season started so slowly and resulted in this game of catch-up. 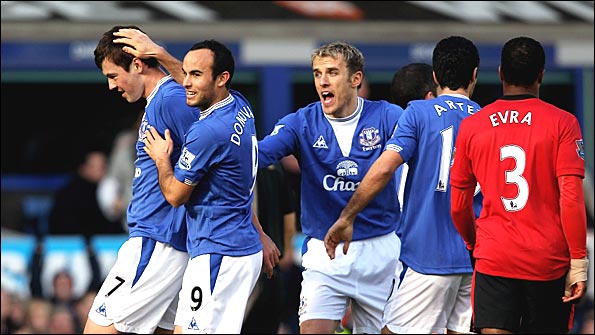 Everton's recent league record against United was worse than miserable - so the raucous scenes of celebration that rocked Goodison Park at the final whistle were understandable.

There were no smiles for Sir Alex Ferguson, who was grim-faced and left with nowhere to go other than accept and admit United were beaten by the better side. It was a damaging day, an opportunity to turn up the pressure a notch on Chelsea wasted.

And it was a prime example of just how vital Wayne Rooney is to United. Rooney was well-shackled, a couple of moments of danger apart, by John Heitinga and Sylvain Distin and the reduction in his influence had a startling effect on United.

In previous visits to the club he worshipped as a boy and where he shaped his reputation, Rooney has been fuelled by the animosity rolling off the terraces - occasionally over-fuelled by it.

If not exactly kissing and making up, there has been a softening of feeling in recent times and the only abuse Rooney suffered on Saturday was mostly of the "boo-hiss" pantomime variety. Everton's fans were even forgetting to jeer towards the end.

Rooney did a lengthy interview with Everton's own television channel a few weeks ago, while Moyes spoke in glowing and conciliatory terms on Friday about Goodison Park's one-time golden boy.

Could this have had an effect on Rooney, as well as the obvious after-effects of his blockbusting efforts in the Champions League against AC Milan in the San Siro?

Whatever the reasons, and he cannot be expected to hit world-class standards every week, Rooney was not quite himself at Everton and his old team took advantage.

United may point to their exertions in midweek, but that would be harsh on Everton, who ruthlessly exploited the fact that Father Time is now surely tapping Gary Neville on the shoulder.

Everton have looked a terrific side in the last few months, barring aberrations against Birmingham City in the FA Cup and at Liverpool in the league, as they have outclassed Manchester City and beaten Chelsea and United at Goodison Park.

It was almost all too much for chairman Bill Kenwright, who deserted his seat as Everton held a narrow 2-1 lead, but returned relaxed when they added a third in the dying seconds.

Kenwright was surely suffering from an attack of nerves as opposed to a lack of faith because this was a performance in keeping with most of Everton's recent efforts.

As he resumed his seat, Goodison Park was almost literally shaking. It was at moments like this you get why so many Everton fans are reluctant to leave the old place. The atmosphere will not be recreated at any other Everton home - and it is a problem Liverpool will also have when they eventually leave Anfield.

To beat Chelsea and Manchester United in successive home games is achievement enough, but to do it having fallen behind in both matches adds to the lustre. And it was also earned without key midfield duo Tim Cahill and Marouane Fellaini.

Moyes was, by his own standards, beaming after watching Everton show the confidence to take United on with a passing game and reap the rewards. Leon Osman was the game's outstanding performer while the intelligence of players such as Landon Donovan - a superb signing - Steven Pienaar and Mikel Arteta gave them an elegance as well as their trademark resilience and character.

When Dimitar Berbatov put United ahead, it did not look like service would be disrupted. It was not the case as Diniyar Bilyaletdinov ripped an equaliser past Edwin van der Sar.

Everton then gave at least as good as they got before Moyes introduced two young talents making their way in the game - and in the mood to settle this one.

Gosling added to his winner against Liverpool in the FA Cup last season by putting Everton ahead, but the crowing glory was a magnificent surge and finish by Jack Rodwell to conclude the formalities. 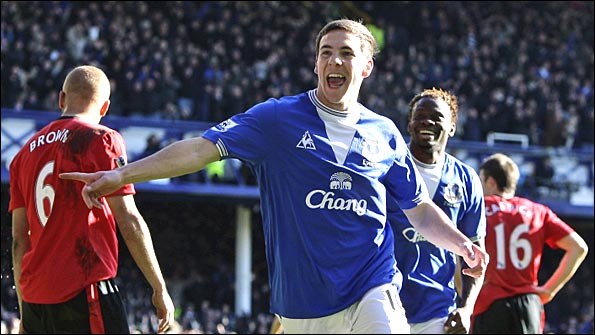 Both of Everton's young substitutes were on the scoresheet against United. Photo: AP

Rodwell is a work in progress, as proved by his poor cameo in the Europa League against Sporting Lisbon, but in a moment he showed why the word is United want to make him a £20m-plus summer recruit.

Everton will fight to keep him, aided and abetted by the fact that unlike when Rooney left, they do not need the money. And it would not pay Rodwell to quit Everton too soon. He will benefit from continuing his tutelage under Moyes, not as a bench-warmer at United.

Rooney could have left Everton and played in most teams in Europe. Rodwell is nowhere near that stature yet, but the raw materials are there to work with. This is a debate for another day.

Everton deserved the joy that swept around Goodison - along with optimism that they may still force themselves into a position to cash in on the unpredictability of this Premier League season.