Terry among friends as Arsenal fade

John Terry relinquished the captain's armband for the second time in 48 hours - only this time it was with victory as the backdrop rather than a humbling and brutally brief encounter with Fabio Capello.

Capello took only 12 minutes to sack Terry as England captain on Friday, although the business end of the conversation took a lot less by all accounts, but the defender was mostly among friends at Stamford Bridge.

And at the end of a traumatic week, with Terry swamped by allegations of a relationship with the ex-girlfriend of England team-mate Wayne Bridge, he responded to the warmth of his reception and the satisfaction of an easy win against Arsenal by milking the moment.

Terry concluded a one-man lap of honour after the final whistle by throwing his Chelsea shirt into the crowd and carefully presenting a supporter in the Matthew Harding Stand with the armband. Redemption time. 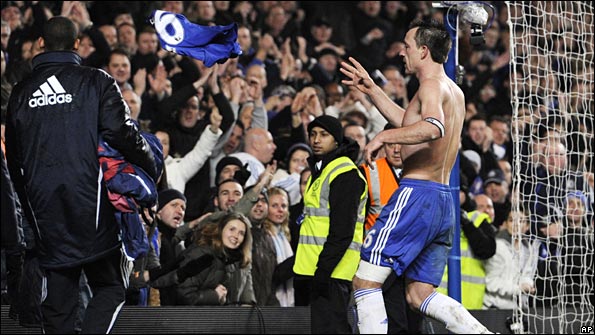 John Terry throws his Chelsea shirt into the crowd

Arsenal also played their part by flatly refusing to burden Terry with any of those nasty defender's worries, such as the fear that the opposition might have a few shots at goal or exert even the slightest modicum of physical pressure. Perish the thought.

Terry was always going to command the attention, even overshadowing the importance of a game that graphically illustrated yet again why Chelsea are serious title contenders and Arsenal lightweight pretenders.

As expected, he demonstrated that, in this familiar environment, he has the strength of mind to cocoon himself from any personal pressures and focus solely on the game. In a football context, it is an impressive asset and one that will have been carefully noted by Capello as he weighed up his judgement on the England captaincy.

The same applies at his club and Terry emerged to warm applause before the game, but Stamford Bridge's real show of support came in the seconds before kick-off when the stadium resounded to chants of "There's Only One England Captain". The fact that the one England captain is now Rio Ferdinand appeared a matter of supreme indifference. If there were dissenting voices among Chelsea fans, they could not be heard.

And, almost inevitably, Terry was swiftly in the action to set up Didier Drogba's first goal. Freed from the cares of the outside world and in the arena in which he thrives, Terry even felt confident enough to launch a dashing counter-attack in the latter stages of the first half.

It was more of the same after the break - and it was a sign of the relative ease of his afternoon that Terry's only serious moment of discomfort came when Chelsea keeper Petr Cech accidentally clashed with his captain. Terry finished the game with heavy strapping on his left thigh but looked sprightly enough as he took the acclaim at the final whistle.

Carlo Ancelotti, as he was before the game, was fulsome in his praise of Terry. It was Arsenal manager Arsene Wenger, however, who arguably offered the most pertinent insight when he said: "I had some players who, when they had private problems, were even stronger on the pitch because it is the place where they get out of it, get away from it."

Terry's ability to comparmentalise events on and off the field will have made Capello's decision - a wholly correct one - to take away the England captaincy even easier. The Italian knows Terry's performance is highly unlikely to be affected by matters around the periphery once the action starts.

Wenger's assessment of Terry was one of his better moments in an after-match briefing that was at best wildly optimistic and at worst delusional. Amid damning this vastly-superior Chelsea side with churlish faint praise - "we didn't get a demonstration of football but they were efficient" - Wenger somehow reached the conclusion that Arsenal were actually the better team.

Not quite sure what the French for "poppycock" is, but Wenger is in serious denial if he believes this to be the case. He quoted statistics about possession and about how Chelsea's greater experience allows them to know where and when to commit fouls. Like his Arsenal team, Wenger will have to do much better than that.

Wenger's flawed analysis was surgically dissected by Ancelotti. "Maybe they did have more possession, but football is about attack, defence, keeping possession when you need to - and results," he responded. "You can't just speak about possession. You have attack, defence, counter attack and keeping results. That is football." Touché.

And here is one statistic Ancelotti will be happy to offer up as evidence that Chelsea's way is preferable to Arsenal's - namely the aggregate score of 5-0 in the two meetings between the teams this season.

Wenger's apparent satisfaction at Arsenal's performance was betrayed somewhat by his heated touchline behaviour. He was ticking from the opening seconds, responding to the offer of a coat from a member of his backroom team by throwing it on the floor and later kicking it in a moment of fury, barely letting up for the whole afternoon. Wenger was as energetic as any of his players. 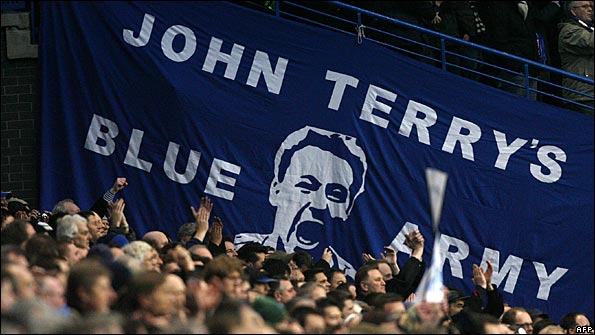 Chelsea fans register their support for Terry with this banner

For all his sugar-coated offerings, such as "our spirit was great and our performance was great" (not really Arsene), Wenger is kidding only himself. There was barely a moment when Chelsea were not in total control of the game, either in defence or attack.

And coming on the back of Arsenal's dismantling by Manchester United at the Emirates, this latest defeat completed a chastening seven days for Wenger, who has seen all his words of optimism put in context by two of the clubs he hopes to overhaul this season.

If a moment summed up the gulf between the sides, it came in the closing moments when Drogba tumbled in a tussle with Cesc Fabregas. The Spaniard held his outstretched hand high and low towards referee Mike Dean in an attempt to illustrate how it was physically impossible for him to bring the striker to the floor, such is the differing statures.

Fabregas could have been offering a commentary on the game. It was almost an unwitting admission that this was men against boys. If Arsenal summoned up all their collective strength to land a punch on Chelsea, it is hard to see them even forcing a blink.

Chelsea may not have won many marks from Wenger for artistic impression, but their brand of powerful play and attacking variety stands more chance of success than the current Arsenal template, built around wispy, lightweight artists.

Drogba and Chelsea prefer the direct route to goal, whereas you get the impression that it does not actually enter the heads of some Arsenal players to take a shot at goal when they can make another pretty, but utterly pointless, pass.

Wenger will cling to the belief that Arsenal can somehow make up the nine-point gap between themselves and the top of the table, starting against Liverpool this week, but it is a diminishing prospect.

And amid the general gloom, of wider concern for Arsenal and England was the non-event that was Theo Walcott's performance. It was no surprise when he was substituted after 63 minutes, looking light years away from the player who terrorised Croatia with a hat-trick in Zagreb in England's World Cup qualifying campaign.

All the good news belonged to Chelsea - and Terry was happy to share it, as well as his shirt and armband, with their supporters at the end of his week of turmoil.