In an old Monty Python sketch, the fictional East End gangland duo of Doug and Dinsdale Piranha used to exact revenge on rivals by nailing their heads to coffee tables.

It is impossible to imagine how this vicious form of comedy retribution might actually feel - but try the pain inflicted by watching Manchester City and Liverpool at Eastlands and you might just get a good idea.

Liverpool left with a point and £25,000 rifled from their less-than-bulging coffers by way of a fine imposed for collecting six yellow cards. This was a minor offence because the major crime on the charge sheet was committed by both City and Liverpool, namely impersonating teams with serious ambitions to reach next season's Champions League.

If fortune favours the brave then City and Liverpool will not be in the top four at season's end because Eastlands was littered with frightened men, on the pitch and in the technical area, and it resulted in a thoroughly wretched football match.

They were men who were frightened of defeat and its potential consequences. The climate of fear hung over Eastlands like a bad smell, so it was somehow appropriate that City and Liverpool stank the place out.

In the interests of fairness to Manchester City manager Roberto Mancini and his Liverpool counterpart Rafael Benitez, it is only right to get the mitigating circumstances out of the way first. 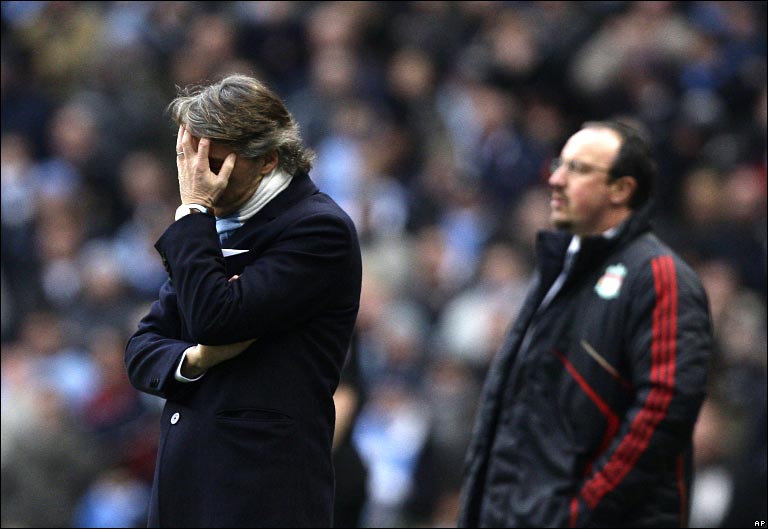 City were robbed of the inspirational Carlos Tevez, in Argentina with Mancini clearly in the dark about his date of return, and could only place Craig Bellamy on the bench after his recent injury.

Benitez, in turn, could only call on Fernando Torres for a tetchy 15-minute cameo following his lengthy absence after knee surgery and he was unable to influence affairs.

There the sympathy ends because there was simply no excuse for the embarrassing lack of quality, ambition and drive in evidence from two teams with grand designs on finishing fourth and taking their place in Europe's elite group next season.

From first to last there was an absence of action, entertainment, technique and a simple willingness to go and win a vital football match. If you think this sounds bad, in reality and in the flesh it was probably worse.

There was a moment of gallows humours as the players left the field at half-time to the strains of Journey's sugar-coated AOR anthem "Don't Stop Believin'" - believe me it was tough to follow the message and thousands inside Eastlands had stopped long before referee Peter Walton ended the torture.

England rugby union manager Martin Johnson has copped flak this week for admitting: ''Playing rugby isn't about what people want to see." At Eastlands on Sunday it appeared some of that pragmatic oval ball philosophy had filtered through to Mancini and Benitez because there was no suggestion their main priority was customer satisfaction.

Mancini applied a veneer of satisfaction to City's performance, claiming they "played very well" - it is tough to agree with the Italian and it was noisily obvious that many of the locals did not agree with him either.

Benitez at least admitted this was a result that was not beneficial to either City or Liverpool, although the cautious (a kind description) approach of the two managers actually suggested they would have happily settled for a point before kick-off.

Lots of talk about organisation and cancelling each other out, but there was so much more to why this highly-anticipated encounter turned out to be arguably the worst game I have seen this season.

Set against the unambitious, negative tactics of both managers, we had two sets of players unable or unwilling to take the slightest risks, conceding possession with alarming regularity and allowing the game to degenerate into a morass of mediocrity.

There were two shots on target - shared between the sides - and City's new boy Adam Johnson did at least attempt to inject some urgency into affairs before tiring. This, a Martin Skrtel header and late penalty claim when Liverpool's Yossi Benayoun refused to hit the deck after he was fouled by Vincent Kompany (he shouldn't actually have to hit the deck to get a penalty if he has been fouled) provided just about the sum total of so-called incident.

Liverpool have the easier run-in as they eye fourth, but there can be no guarantees of the sort given by Benitez if they play in this unadventurous manner.

No-one would seriously expect Liverpool's manager to arrive at Eastlands and let all guns blaze, but this time last year Benitez hit on an attacking style that served his team brilliantly in the closing months of the season.

The struggles of this season appear to have made him ditch this approach and return to his default option of conservatism. It has made Liverpool more effective defensively in recent weeks but is not easy on the eye.

Human nature perhaps made the approach of the two managers inevitable. The smart money might be on neither being in their current posts at the start of next season should they fail to achieve the minimum requirement of a place in the top four.

Mancini's brief Eastlands reign has been a strange, colourless affair so far despite City doing themselves great credit in the Carling Cup semi-finals against Manchester United.

He has tightened City up at the back, but the overall effect does not appear to have made them markedly better than they were under the sacked Mark Hughes.

And three draws in the space of a week could soon have chief executive Garry Cook studying the infamous "trajectory of results" that did for Hughes on his "Trajectory of results-ometer", or whatever device he uses to judge his manager's progress.

Talk of dressing room unrest has not helped Mancini either, although if speculation that bones of contention are long practice sessions and training times being changed on a whim is true, this is hardly likely to garner great sympathy from supporters.

What will frustrate City supporters, and some of their ire was being directed at Mancini, will be a failure to take advantage of the flaws of others in this unpredictable season and grab what should be a wonderful opportunity to set the platform for progress next term with Champions League football as an added attraction.

And if we are to take what was on offer at Eastlands on Sunday as a guide, it offered more hope and encouragement for Aston Villa, Tottenham and sudden long-shots Everton than it did for either City or Liverpool.

There was one moment of good humour on a bleak day when Mancini offered a puzzled expression when quizzed in his media conference about the booing that greeted the final whistle.

"Booing?" he replied, clearly never having heard the expression. There followed some booing from the assembled journalists, just to help him out of course.

Mancini was gracious enough to laugh - but any more games like this and he will be grimly acquainted with exactly what real booing is.