Fabio Capello's message was short and sweet - delivered in a 12-minute meeting at Wembley that left John Terry no time to wonder about his fate as England captain.

Terry was hastily and brutally reduced to the ranks after Capello had taken time to sift through the fall-out of the Chelsea defender's alleged affair with the ex-girlfriend of England team-mate Wayne Bridge.

And having seen the evidence, the 63-year-old Italian clearly reached the conclusion that his side could not be led into the World Cup by a captain who threatened to fracture the unity of squad and purpose essential to success in South Africa.

Capello made a football judgement - not a moral one - on the claims made against Terry and decided his skipper's credibility and ability to lead by example had been irreparably damaged. 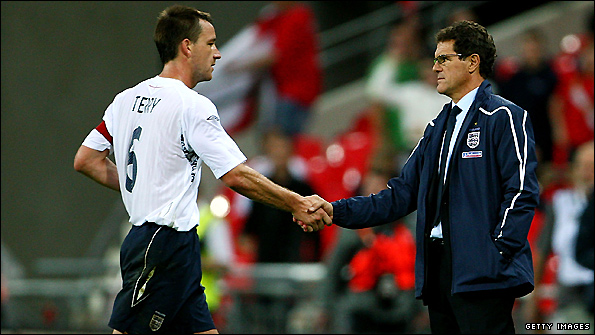 The fact that Capello communicated this bleak news to Terry so swiftly and ruthlessly only adds to the belief that England's World Cup campaign is safe in the hands of the former AC Milan and Real Madrid coach. As executions go, it was logical, impressive and without fuss.

The Football Association was criticised in some quarters for placing Terry's fate in the hands of Capello alone. The decisive manner in which the coach brought matters to a conclusion at Wembley on Friday afternoon vindicates that move.

Capello's vast experience made him best qualified to make the decision - and the FA knew it. Why have a dog and bark yourself?

Terry has proved an excellent captain on the pitch in England's World Cup qualifying campaign - but hardly a safe pair of hands off it. And Capello could not afford the issue of the captaincy becoming a sideshow in the countdown to South Africa.

The irony is that Capello regards the obsession with captaincy as a peculiarly English disease, a view shared by former England manager Graham Taylor. Capello regards it as an over-rated honour and expects shared responsibility in his teams. Still, he has come to realise its meaning whether he accepts it or not. Even Prime Minister Gordon Brown was pressed for his reaction to Terry's sacking.

Capello looked startled to be ambushed as he pushed his luggage away from the carousel at Heathrow on Thursday after flying back from Switzerland. And to be quizzed again outside his home would have left him with a pain in the neck to go with the one in his knee after recent surgery.

This will have left him in no doubt about the scale of the furore surrounding Terry and the obvious threat of a circus enveloping England's squad unless he took decisive action.

Imagine the captain's traditional pre-match press briefing had Terry survived and led England into the friendly against Egypt in March? It is a fair bet the first question would not have probed Terry's knowledge of the intricacies of the Egyptian attack, or what victory would mean to England's World Cup strategy.

Terry has already suffered personal abuse from supporters at Burnley and Hull - and there would have been the real and highly-embarrassing prospect of England's captain being jeered by his own fans had he led the team out against Egypt.

Capello, to put it bluntly, does not need his skipper carrying such excess baggage in the most crucial months of his outstanding England reign.

All these factors made Terry's sacking the only option when the pair met, albeit briefly, and Capello will have acted safe in the knowledge that, no matter how heartbroken Terry may have been as he drove away from Wembley, the Chelsea defender has shown the ability to put personal stresses to one side and perform on the pitch.

Capello could take the captaincy away from Terry, cure a problem that had the potential to become a long-running sore as South Africa approached, but still be certain he is strong enough mentally as a player to continue as one of England's pivotal defenders.

Nothing will be allowed to compromise Capello's meticulous preparations for the World Cup. He certainly could not risk factions emerging in the dressing room. And now the summary dismissal of Terry has made that point emphatically, Capello can return to football business.

Terry will be succeeded by Rio Ferdinand - an appointment not without risk given the Manchester United's recent dismal injury record. Capello will hope Ferdinand can now steer a safe course to South Africa and there are no further disruptions to his plans.

My own personal choice would have been Liverpool's Steven Gerrard, although his naturally introspective nature - which may come as a surprise to those who have witnessed him winning games single-handedly at home and abroad - may have counted against him.

Wayne Rooney would have been the so-called "People's Choice". but his time will come. Capello may well feel that England's outstanding player is in such a golden spell that he does not want to risk cluttering his thoughts with added pressure and responsibilities.

One man who emerges with his reputation confirmed, indeed enhanced, is Capello. He is a man paid to make the big decisions.

And by taking the captain's armband away from Terry, he got this one right.