Have Spurs got nerve for top four?

When Sebastian Bassong prepared to make his grand Anfield entrance only to discover he had forgotten to put his shorts on, Harry Redknapp may just have suspected it was not Tottenham's night.

And so it proved. Quite how Bassong overlooked this crucial item of clothing - think standing at the bar for two hours with a pair of polka-dotted underpants on full display - is as inexplicable as Spurs' performance.

Bassong's team-mates were almost as absent-minded as the startled and shortless defender as they forgot a visit to an under-strength and fragile Liverpool represented the perfect platform to make a powerful statement about their top-four aspirations.

Instead, Spurs froze when presented with the opportunity to exert authority at the expense of one of their closest rivals - allowing doubters to revisit old questions about whether they have the nerve to see the job through.

Harry Redknapp was in sanguine mood while accepting this was one that got away - and Spurs will want to put this single, albeit damaging, defeat in its proper context. They arrived at Anfield on the back of a six-match unbeaten run and with five clean sheets behind them in the Premier League. They stay in fourth place even after this loss.

But other unsavoury statistics are at work and point to the problem Redknapp must solve if Spurs are to bridge the financially rewarding gap between fifth and fourth on a permanent basis.

He will be less concerned about his own miserable managerial record at Anfield, 13 games without a win, than by the fact that it is now 66 league matches since Spurs won at the home of one of the so-called "Big Four".

This was a 2-1 victory at Anfield in 1993 - a victory they never looked like repeating once Dirk Kuyt had profited from sloppy Spurs defending to give Liverpool an early lead. It was a sign of things to come when Alberto Aquilani, a gifted but hardly physically terrifying presence, showed more commitment to fight over a routine long clearance, allowing Kuyt to cash in.

The pre-match huddle is one of the most pointless pieces of posturing in modern sport, and both sides employed it at Anfield. The key difference was that Liverpool came out of theirs with serious intent. Whoever did the talking in the Spurs get-together needs to find a new speech writer. 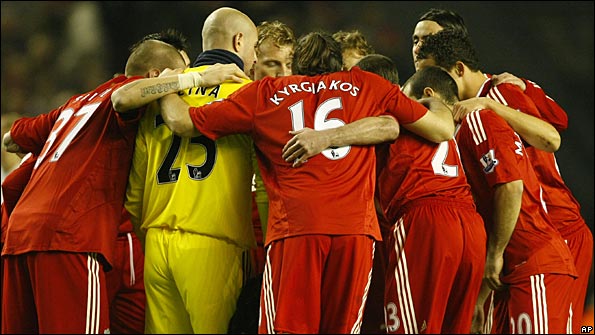 Liverpool go into a pre-match huddle

Spurs are, without doubt, a gifted and attractive side. They also have players who can mix it on the other side of the game when required and the capability to pick up the golden ticket fourth place brings. They remain flawed, however, despite the optimism engendered by the early months of the season.

And the suspicion lingers that when presented with serious opposition, away from White Hart Lane at least, they are lacking either the self-belief or the nerve to prevail.

When Michael Dawson earned them a draw at Aston Villa in November, their calm and ordered approach made them look every inch serious contenders for the top four - and they remain so, but there are also worrying signs and they were, like Bassong's nether garments, on display for all to see at Anfield.

Take their visits to Arsenal, Chelsea and the Carling Cup tie at Manchester United this season. No serious threat of victory, no goals scored. Is there an inferiority complex at the root of this?

Are Spurs actually convinced that they can go to these grounds and win? Not on Wednesday night's evidence, and yet they should have kicked off at Anfield almost overwhelmed by the belief that they could end this barren run.

There should have been no inferiority complex at Liverpool, and yet another concern for Redknapp was the grim truth that Spurs missed Aaron Lennon more than Liverpool missed Fernando Torres and Steven Gerrard.

Redknapp was right to highlight Jermain Defoe's disallowed goal - apparently ruled out in the maze of offside regulations that would have made the score 1-1 - but it was not a complaint he made with true conviction. He knew Spurs got their true reward at Anfield.

Spurs had spells of possession but little threat. Liverpool should have wrapped up a confidence-bolstering three points long before Kuyt scored a twice-taken penalty in stoppage time after Bassong was caught with his trousers down (sorry) and resorted to a clumsy flattening of David Ngog.

It was frustrating viewing for the Spurs fans inside Anfield. The pretty passing is all very well, but they rarely laid a glove on Liverpool, who showed more hunger and desire and now, despite all their trauma, stand only a point behind Spurs.

When real urgency was required, it never came, a mystery given the unquestionable quality wrapped within Redknapp's team.

For Rafael Benitez it was respite. Indeed, if they could have hung on for victory at Stoke City on Saturday, it would have represented quite a recovery from the FA Cup defeat at home to Reading. 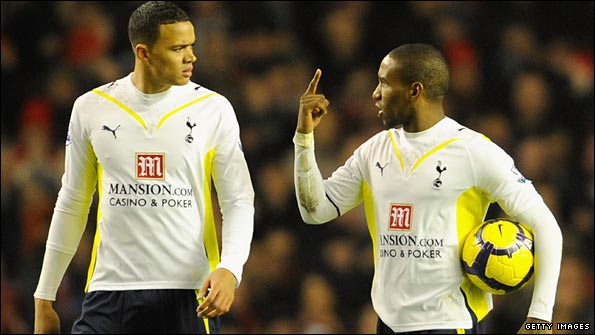 Jenas and Defoe discuss what went wrong at Anfield

This was hardly classic Liverpool. How could it be when they were stripped of the creative forces of Torres, Gerrard and Yossi Benayoun? But they showed more stomach for the fight and the tackle than Spurs. To put it simply, they had a right go - something they could never be accused of amid the Reading debacle.

And in stand-in captain Jamie Carragher, they had the leader they required. No sulking or self-pity at Liverpool's plight, simply a fierce will to contest every ball, occasionally with over-exuberance, and a determination to set the tone for his team-mates.

If you were searching for the perfect example of the requirements of a captain's performance, this was it. Manic at times, but with the level of passion Liverpool require in troubled times.

Benitez will also have been heartened by public support from The Kop and co-owner George Gillett, although the American's description of their struggles as "a blip" shows just how far removed he is from reality and the true expectations of Anfield.

When quizzed about what his team had learned from defeat, Redknapp candidly admitted: "I don't know what they have learned. They are all experienced, international players."

He was in no mood to disagree when I asked him whether this was a huge opportunity that had been squandered, saying: "When you see Liverpool are without Gerrard, Torres, Glen Johnson and Benayoun you have got to think we will never have a better opportunity.

"We missed Lennon, the one player who can carry the game at pace, but they had a lot of key players out and it was a great opportunity for us - one we missed I'm afraid."

Spurs are a fine side, a potential top-four side, but taking these chances when they present themselves is almost as much of a pre-requisite as putting your shorts on when you have the ambitions Redknapp has at White Hart Lane.