Vieira - a risk Man City can afford to take

When asked to name a Premier League "Team of the Noughties" I had no hesitation in planting Patrick Vieira right at its heart - ahead of Frank Lampard, Paul Scholes and Roy Keane - and making the Frenchman a prime contender to captain this imaginary eleven.

My selection was not based on my last two in-the-flesh glimpses of Vieira - namely an embarrassing appearance as a substitute when Liverpool beat Inter Milan in the Champions League in 2008 and a desperate 45 minutes at Manchester United in the same tournament a year later when Jose Mourinho mercifully put him out of his misery at half-time.

It was based on Vieira as leader of Arsenal's "Invincibles" of 2004, a player in at the start of Arsene Wenger's magical Highbury renewal and the captain whose final kick for the club - the winning penalty against Manchester United in the 2005 FA Cup final - gave the Gunners their last trophy.

Vieira was both enforcer and creator supreme, an iconic Arsenal figure and symbol of Wenger's transfer market genius. He had plucked the athletic and gifted midfield man from AC Milan's reserves for £3.5m in 1996.

Manchester City will be hoping for more of the Arsenal vintage than the Inter one as they prepare to sign Vieira on a short-term deal. It is a gamble by new manager Roberto Mancini, but the Eastlands riches make it one he can afford.

Vieira's recent form suggests he is a spent force at the highest level. At 33 years of age, he is unable to command regular first-team football at Inter after making only 16 appearances this season, most as substitute.

Yet his move to City is perfectly logical from his point of view as he clings to hopes of making this summer's World Cup and adding some knowhow to Raymond Domenech's flawed France side.

Vieira knows that if he shows even glimpses of his former greatness, the vulnerable Domenech may be tempted to go back to the reliability of one of his country's greatest players as he plots his campaign in South Africa.

And for City, this means they will be getting a motivated Vieira, eyeing one last shot at the greatest stage in football. Vieira is also a fiercely proud man who will not want to mar so many glorious Premier League memories by displaying only faded grandeur at Eastlands.

So for Senegalese-born Vieira, the lure of Manchester City and the Premier League is clear, in both a footballing and financial context.

For City, the reasoning is not so obvious. Mancini knows his man, having signed him for Inter from Juventus in 2006, but he has younger and more energetic midfield players at his disposal in Stephen Ireland, Gareth Barry, Nigel de Jong and Vincent Kompany.

Mancini made a point of lavishing praise on the combative De Jong after I watched his first game in charge of City against Stoke City on Boxing Day.

So why the need for Vieira, who has seen better days, comes expensively even on a short-term deal and who is a shadow of the player who once reigned supreme in winning three Premier League titles and four FA Cups at Arsenal? 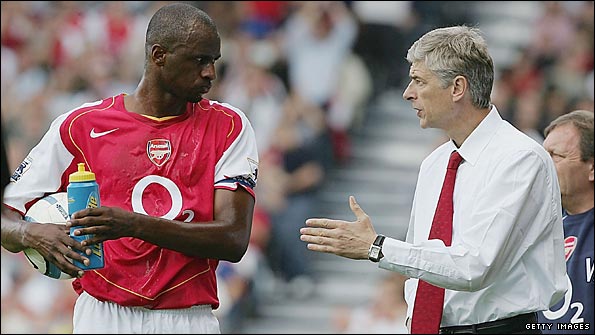 Mancini can take heart from the words of Vieira's former manager Wenger, who toyed with the idea of re-signing his former captain but ultimately stuck to the old maxim that you should never go back.

Wenger believes that Vieira can make an important contribution to the transition taking place at Eastlands.

'We have young players in his position and are not in a real need to bring players in this position," said the Gunners boss. "I was surprised it was Manchester City. I believe he will still be very effective in the Premier League because he has been injury-free for three or four months, and that is what he needed."

The other side of the coin is expressed by Vieira's former Arsenal team-mate and BBC football pundit Lee Dixon. "Patrick gets a few little niggles and hasn't got a classically fit footballer's body, where you know he's an athlete who can go on and on," said the former right-back.

"He might look like he has that body, but he hasn't. He always needed a long time to recover after games, longer than some of the older lads.

"When Patrick joined Juventus from Arsenal, the Premier League and Serie A were like chalk and cheese, and, at that stage of his career, it suited him. I know myself that, since I finished back in 2002, the game is twice as fast and ridiculously different to when I played.

"It's four-and-a-half years since he left Arsenal, he's 33 and if you are asking, 'can he play at the top level?', then I wouldn't think he'd play every week."

Vieira may, however, help Mancini address two problem areas that undermined his predecessor Mark Hughes, allowing the Italian to deliver on his promise of silverware.

When I have watched City this season, they have occasionally lacked leadership on the pitch and have almost always been vulnerable at the back. Kolo Toure, another former Arsenal star, has not been a comfortable fit as either captain or defensive lynchpin.

Vieira, at any age, is a natural leader, and his experience may enable him to offer a more effective screen to City's exposed back four, although the legs and energy are not what they were.

And City, unlike many other clubs who may have been tempted to take a punt on Vieira, are in the luxurious financial position of knowing they can afford the odd failed gamble. The Eastlands hierarchy may not like it, but they know it will amount to the smallest of drops in the giant ocean of cash available to their Abu Dhabi rulers.

Great players should always be welcomed back to the Premier League, but it is to be hoped Vieira, a midfield prizefighter happy to stand toe-to-toe with Manchester United's Roy Keane (and that was only in the tunnel before kick-off), has not taken on one fight too many.

As someone who put him in my team of the decade, I would hate to see more of the latter-day Vieira, floundering in vain to find the old magic and struggling to cope with younger and more athletic adversaries. I am sure this would also apply to anyone who saw him at the peak of his powers at Highbury.

If he can recapture just a little of what made him great before he left for Juventus in 2005, then Mancini's first transfer market move since arriving at Eastlands may turn out to be a coup.