Carlos Tevez's English may not be fluent, but you could not fail to understand the message he sent Manchester United and Sir Alex Ferguson on Tuesday.

As Tevez inflicted the blows that gave Manchester City a slight advantage amid the domestic warfare of this Carling Cup semi-final, he went through his tick-list of targets as he remembered those who dared to doubt him.

Tevez reacted to equalising from the spot by gesturing in the general direction of Gary Neville, who backed Ferguson's assertion that financial demands made the Argentine too expensive to keep at Old Trafford.

And when Tevez headed the winner, he was off again. The cupped ear gesture towards the directors' box mirrored his celebration towards the Old Trafford hierarchy after scoring against City last season as negotiations on a permanent deal started to sour. He was determined no-one should feel left out.

Whether Ferguson will make the final gesture of this little squabble will be decided after next week's second leg, but Tevez is proving an inspired arrival at City and a loss for United, at least for now. 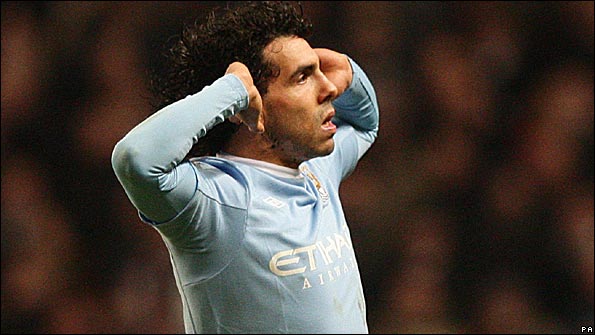 The final reckoning on whether Ferguson was wrong not to sign Tevez can only be made at the end of this season when the successess of the respective clubs are measured.

But there is a fact that is currently beyond dispute. Manchester United would benefit from having Tevez back in their ranks - 13 goals in his last 10 starts tells you that.

Ferguson would never admit he erred in allowing Tevez to fall into the grateful arms of Manchester City, but the striker looked driven by a personal mission to torture his former manager on an atmospheric night at Eastlands.

Barracked when he returned to Old Trafford earlier this season and clearly aware of Neville's less than flattering assessment of his value to United, Tevez could barely contain himself as he tormented United. The man who declined to celebrate when he enjoyed successes against another former club, West Ham, had no qualms about rubbing United's nose in it here.

And how City's fans revelled in it. The familiar cry of "Fergie, Fergie sign him on" (the rallying call of the Stretford End pressure group pleading for United to land Tevez) swept around Eastlands off the back of every decisive Tevez contribution.

It all added further weight to the arguments coming from those who suggest Ferguson has dropped an almighty clanger. That said, there were reasons why the Scot did not pursue the deal.

Tevez was unexceptional and not a regular goalscorer at United last season. As he basks in the glow of his achievements at City, it should also be remembered that he did not make a cast-iron case for Ferguson to regard him as indispensible.

Often, the adulation Tevez received was out of proportion with the contribution made. Yes, there were some key goals, but Ferguson perhaps thought he had a better version of the Tevez template in Wayne Rooney.

Also, Tevez's attempts to use Old Trafford adulation as a lever against Ferguson and the United board were ham-fisted and a distraction when the serious business of winning the Premier League still needed to be done.

With Cristiano Ronaldo gone, Rooney was going to be operating even more through the centre, so with Dimitar Berbatov in the ranks it was understandable that Ferguson would not regard Tevez as an essential purchase in an extravagantly rich deal.

As I stated in an earlier blog, none of these reservations that United would have justifiably expressed made him a dubious purchase for City, and he has proved to be a wonderful signing so far.

When assessing whether to sign Tevez, City will have asked two questions: Could they afford the transfer? Yes. Was he an upgrade on what they had? Emphatically so, althought I suspect the impact he has had so far this season has outstripped even their most optimistic expectations.

The danger for Ferguson was that Tevez had the quality and capacity to be a potential success elsewhere - and when that elsewhere happens to be Manchester City, then his absence is highlighted even more.

City conducted a parade of legends from their 1969/70 team before the lights were dimmed as usual at Eastlands - and the way Tevez was greeted when he was substituted late on suggests he is on course to join those illustrious names.

Tevez may have been the match-winner on Tuesday, but Rooney is still the player most would take ahead of him. This is not to decry Tevez, it is simply an acknowledgement of Rooney's brilliance, which he showed in full force as time ran out.

But as Tevez stood on the halfway line in almost mocking pose after scoring his second goal, Ferguson may just have wished for a moment he could take him back to Old Trafford - if only for a little while.

This is because the drive and urgency Tevez brought to everything he did was lacking in United's work until the last 20 minutes, when Rooney embarked on a magnificent one-man mission to take his team into next week's second leg at least on level terms.

United, with extra forces deployed in midfield, dominated the first 40 minutes and led through an early Ryan Giggs goal, but they appeared content to stroll, declining to kill off a desperately nervous City, and paid for it.

In a strange season on and off the pitch at Old Trafford, this was further confirmation that they are not the team they were. United are too average too often in games, and they are not getting away with it as often as they did.

They still possess some of the old instincts that allow them to remain in the hunt for silverware - and City's euphoria at beating the arch-enemy and moving close to a first major Wembley final in 29 years was tempered with large helpings of caution.

Goalkeeper Shay Given formed a barricade on his own in the closing stages, usually against Rooney, perhaps a taster for next Wednesday at Old Trafford.

Ferguson had paid City the compliment of fielding a strong side and ditching his plans to play a young team - and his fierce, fists-clenched reaction to his side's early strike showed how important this was to him.

Make no mistake, Carling Cup or not, Ferguson will be badly hurt if City finish the job off in his own house next week and will surely use every weapon at his disposal at Old Trafford, something that should flatter their rivals after being downtrodden for so long.

For City, to come from behind and beat United will only add to their confidence and conviction that special things are happening at Eastlands. Next Wednesday could be a seminal day for the club - or confirmation of just how far they still have to travel.