From Moses to Monty Python

At The Reebok Stadium

Owen Coyle travelled from Moses to Monty Python on his journey of justification after a night when emotions were as raw and bitter as the Lancashire weather.

Coyle, a deeply religious man, waxed biblical as he responded to banners and verbal abuse labelling him "Judas", insisting he is more akin to football's Moses after leading Burnley from the wilderness of the Championship to the Premier League's promised land.

He was at least able to detect humour amid the bile coming from 5,000 Burnley fans via a banner lifting from the finest line in Python's "Life of Brian" that told Coyle: "He's Not The Messiah. He's A Very Naughty Boy."

The famous Burnley declaration "Owen Coyle Is God" seemed an age away after his move to Bolton and his words of explanation were, to continue the Bible's theme, always going to fall on stony ground. At least he was able to seek comfort in a victory that allowed his new charges to move out of the bottom three as his old club dropped in. 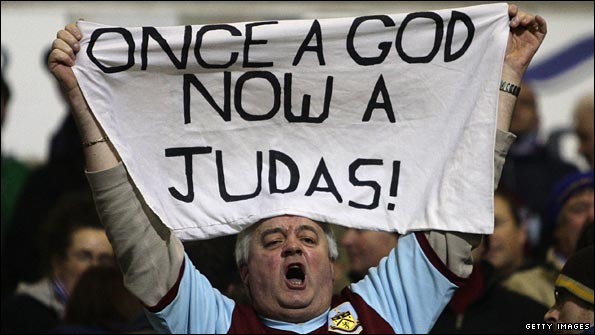 It was only just over a month ago that I watched Coyle stand in the centre circle at Turf Moor and take acclaim in the manner of a conquering hero after Burnley, in his words, "stood toe-to-toe" with Arsenal and earned a deserved draw.

There is genuine sadness in the change those intervening weeks have brought after Coyle decided, in what he insists was "a purely footballing decision", to leave Burnley and move the 31 miles to Bolton. In doing so, Coyle has endangered his legacy to such an extent that there is every likelihood he will take the blame for leading the Clarets back to the wilderness if they end up being relegated.

The sense of betrayal among Burnley's fans was palpable even an hour before kick-off as they gathered with banners and chants - in one instance even a "Judas Coyle" haircut - all illustrating their contempt for a man they idolised just a few short weeks ago.

"Hypocrite. From Hero to Zero"..."Never Forgotten Never Forgiven"...and many more besides. None of them flattering. Coyle's appearance in the dug-out was highlighted by the flashlights of cameras - a signal for more invective to be aimed in his direction.

Coyle got what he wanted most from the night - the victory - but if he was hoping for a measure of sympathy and understanding from Burnley's fans, then he is in for a long wait. It will never come. Not on Tuesday's evidence.

Even he admitted he understood why Burnley supporters reacted in the furious manner they did at the mere sight of their former manager. Football and human nature being what it is, we all did - but Burnley must now focus on the Brian Laws era and what looks increasingly like a desperate fight for Premier League survival.

To wallow in the bitterness of Coyle's decision, understandable though it might be, will damage the cause and Burnley's fans must now move on. Laws rightly underscored their importance over the next few defining months, so perhaps it is better their early reacquaintance with Coyle allowed them to get it all out of their collective system.

Coyle made the conciliatory, some might suggest foolhardy, gesture of going on to the pitch at the final whistle to console the Burnley players he was trying to inspire a few short weeks ago, and also to applaud the visiting fans.

It was like poking an angry dog with a sharp stick. Cue more abuse, even when Coyle attempted to give a thumbs-up to the seething visiting support.

Coyle is an impressive figure and an impressive manager - hence the surprise expressed by myself and many others when he defected from Burnley to Bolton in what represents not a lot more than a sideways move. In its bluntest terms, I believed if he continued his progression at Turf Moor he might end up doing better than Bolton.

But he was passionate in defence of his decision after Bolton's win, deserved as it was through Lee Chung Yong's first half goal. He made an eloquent and persuasive case.

Coyle ran through a checklist of his achievements at Turf Moor, both footballing and financial, and you cannot argue with any of them. Don't forget, this was a manager who almost took them to the Carling Cup final as well as promotion last season.

This will not act as a shield against the anger of Burnley's fans, especially as they resemble a team who have had the stuffing comprehensively knocked out of them by the shock of his departure.

Coyle obviously felt the infrastructure and finance in place at Turf Moor meant Burnley could not move at the pace he wanted them to - the puzzle came with the belief that Bolton would be a massive upgrade. Time will tell.

All Burnley's worst fears were played out at the Reebok, where Coyle's effect on Bolton was seen in sharp contrast to the morale-shattering blow he has delivered to Burnley. Two insults for the price of one as far as Burnley are concerned.

Bolton are attempting to play more of the Coyle passing game but this transition will take time. Kevin Davies is still the fulcrum and the new manager is smart enough to utilise this strength.

The stats flowed - and none of them offered consolation to Burnley. This was Bolton's first clean sheet in the league this season while Burnley have only claimed one point out of a possible 36 away from Turf Moor.

As for Laws, he is already brutally aware of the task awaiting him. The worry was that, in the second half, the belief Burnley have shown on the road, despite the habitual defeats, seemed to be missing.

Laws got no help from good fortune either, with Chris McCann and the experienced Graham Alexander off injured inside 15 minutes. He was not feeling sorry for himself - but it would be a hard heart that did not feel sorry for him.

Coyle is now setting his sights on another promised land, namely Premier League survival with Bolton as Burnley attempted to avoid a return to the wilderness.