Mark Hughes - according to Manchester City chief executive Garry Cook - was the victim of a little-known law of life called "the bowling ball syndrome" last season.

Apparently, every time Hughes opened a cupboard a bowling ball fell on his head. Not literally of course, this was simply Cook's unique manner of explaining how the unexpected can throw even the grandest plans off course.

On Saturday, however, after his hasty sacking and even hastier replacement by Roberto Mancini, Hughes must have felt like all those bowling balls plus a 16-ton weight had descended on him with devastating force.

And his sense of disbelief at his harsh and ruthless removal will have been even more acute given that a little over a month ago, in the words of Cook, City were "right on target for where we want to be."

Not anymore obviously. Not even after beating Arsenal to set up a Carling Cup semi-final against Manchester United, or overcoming Premier League leaders Chelsea at a vibrant Eastlands awash with optimism only a fortnight ago.

And targets meant everything to City's Abu Dhabi rulers because the statement outlining the reasons for Hughes' sacking specifically mentioned they were agreed before the start of this season. 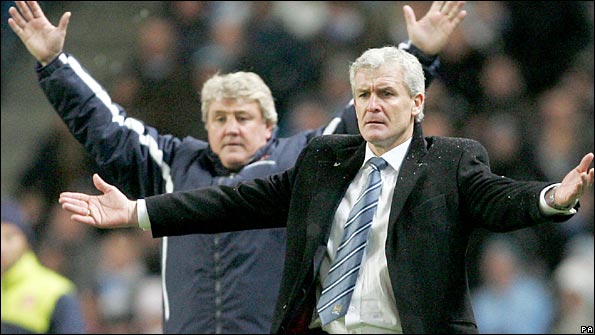 Hughes must have agreed to hit some tough targets if guiding your team to the last four of a major competition and to within six points of the Champions League places, with a game in hand and only two defeats ths season, is judged as failure.

Did the Eastlands hierarchy actually expect City to be challenging for the title before Christmas? This sacking begs that question - and if they did they are inhabiting an unreal world. Their money may be able to buy most things, but instant Eastlands success is not one of them.

It means Mancini - and make no mistake there is a large element of risk in the appointment of a man who has been out of football for 18 months and has no Premier League experience - inherits a team in reasonable health.

Of course, it is folly to suggest this season has been a smooth passage for Hughes. Too many draws and flaws in a defence reconstructed at vast expense have undermined City's start to the season.

I was critical of Hughes after watching a stodgy and negative display at Liverpool, warning that City's naked ambition off the pitch must not be let down by lack of ambition on it.

But where is the common sense in sacking a manager before Christmas after giving him £200m to spend - and when he has delivered reasons for cautious optimism in both league and cup?

After investing such financial faith in Hughes, common sense decrees that you invest footballing faith in the manager and give him at least this season to shape his vision. Common sense - you must remember that?

When we sat in front of Hughes at Eastlands after a deserved win against Chelsea and listened to him speak with such force about the club's future direction, it was nigh-on impossible to imagine he would be shown the door inside 14 days.

It appears the sands shifted fatally beneath Hughes after the 3-0 defeat at Spurs on Wednesday, his fate decided even before the 4-3 win against Sunderland that at least allowed him to end his reign with dignity and victory.

I have watched City regularly this season, and they have resembled exactly what they are, namely a team and a club in the process of a seismic transition. If targets were set pre-season, surely this has to be taken into account.

Hughes has had mixed returns in the market. Shay Given, Gareth Barry, Carlos Tevez and Craig Bellamy have been unqualified successes. Kolo Toure at £15m and Joleon Lescott at an utterly ludicrous £22m must go down as minuses in the ledger.

Emmanuel Adebayor has lurched dangerously back towards the peripheral figure of his latter Arsenal days in recent times, while Roque Santa Cruz - not cheap at £18m - has still to convince.

Robinho, at £32m, has been a disappointment and should have been shown the door before the manager. And it is actually hard to reconcile him as a Hughes signing because he almost came as a rather expensive gift from the Abu Dhabi United Group on the day they took charge.

Hughes has every right to question how this decision has been arrived at so suddenly, with City lying sixth in the Premier League and within two games of Wembley and a first big cup final for 28 years.

Once speculation about an approach to Guus Hiddink surfaced - and Saturday brought a rash of headlines rolling the credits on the Hughes era at Eastlands without any denials - it was clear Sunderland was going to be his farewell. The silence was deafening.

Hughes and City have rattled some cages this season with their bold spending and proclamations of their ambition. Everton manager David Moyes was particularly bitter about City's courting of Lescott, Sir Alex Ferguson labelled them the "noisy neighbours", and Arsenal manager Arsene Wenger pointedly refused to shake hands after the Carling Cup loss.

And if the inconsistency had shown no signs of abating at season's end, then it may have been time then to appraise the work of Hughes. To dispense with him now is premature and questionable.

The advent of the January transfer window may also have precipitated the departure of the former Manchester United and Barcelona striker. City have lavish wealth to disperse at any time, but the sub-plot to his sacking suggests the Eastlands board did not trust Hughes to spend it for them.

There has also been talk of Hughes not being the Abu Dhabi regime's man on the basis he was appointed before their takeover. Nonsense. They made him their man by allowing him to spend so much money.

Hughes' status as a Manchester United legend did not sit easily with many City fans, who could not quite bring themselves to fully accept a man who was an idol of Old Trafford for so long, despite his fine work with Wales and Blackburn Rovers. 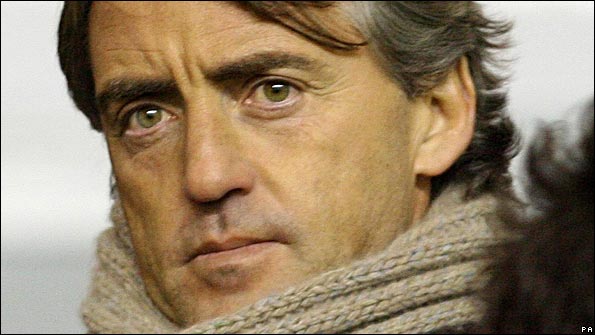 But the appointment of Mancini is unlikely to be unanimously received by the Eastlands faithful either. You suspected they rather liked the idea of Hiddink or (and this was the dream) Jose Mourinho, to oversee the next stage of the building of an empire if Hughes bit the dust.

Instead they have Mancini, not exactly top of their wish list, who has appeared from nowhere and out of exile to move City forward. He won three Serie A titles with Inter Milan and also impressed in charge of Fiorentina and Lazio, but he is unproven in the Premier League and will be under pressure immediately.

Unusually in these instances, he has inherited a side in a promising position. He will be expected to build on that, to meet the targets Hughes has apparently failed to achieve.

Time will tell if this is a wise move or a designer-manager decision by a hierarchy simply keen to have a bigger, more high-profile name, on the door at Eastlands.

And what if he is in a similar position this time next year after a spending spree? Presumably there will talk of missed targets and "we would like to put on record our respect for and thanks to..." The precedent has been set.

There has not been much sympathy for Manchester City this season. Indeed there has been jealousy in many quarters about their new-found wealth and willingness to use it, but there should be some for Mark Hughes. He has been harshly dealt with.