Where now for Everton?

Bill Kenwright witnessed the unpalatable present as he suffered the latest evidence of Everton's decline in defeat at Hull City - and was then left to digest an uncertain future.

If enduring a first 45 minutes described as "right up there with the worst of them since I have been here" by manager David Moyes was not bad enough, news had started to filter out that the government had rejected Everton's proposals for a new 50,000-seater stadium in Kirkby.

This contentious, controversial project was Kenwright's big attempt to allow Everton to mix with the Premier League's big-hitters, a magnet to attract the new investment that has eluded him for years and an escape from the financial straitjacket that has stunted the club's progress.

The decision by communities secretary John Denham represents a huge personal setback for Kenwright and is the third time Everton have tried and failed to leave Goodison Park - twice under the current regime.

With Kirkby seemingly dead, there is now the inescapable sense that theatre impresario Kenwright is running out of road on which to take Everton forward under his stewardship. 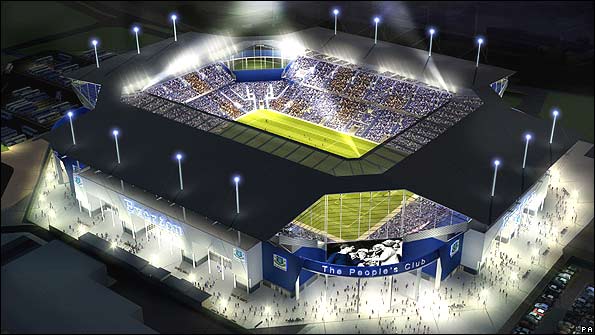 Everton defiantly insist their search for a new home will now intensify, but where it will be and how they will finance it are two great imponderables.

Kenwright's reign is now seemingly trapped in an uncomfortable limbo. He was unable attract investment before the Kirkby project was grounded - he is even less likely to do so now the financial benefits a new ground can afford have been removed.

And after two summers when transfer outlay has effectively been funded by sales, Kenwright will find it hard to offer his increasingly embattled manager Moyes the hope of any serious future transfer cash.

At first glance it looks like Kenwright's reign has reached a dead end but unlike many supporters, I do not believe he is some sort of deliberately malign force on Everton.

Kenwright and Everton's board have, however, overseen a divisive scheme that split a fiercely-partisan fan base and has proved impossible to deliver. There is little good news for Everton's owner and chairman in that.

And the brutal truth is that unless Everton's hierarchy swiftly comes up with a viable alternative to Kirkby, it is hard to see where Kenwright goes from here.

Everton could mount a legal challenge, but the word out of Westminster already is that they would not get past first base because the secretary of state's decision falls in line with planning inspectorate recommendations.

Kenwright and his chief executive Robert Elstone could explore the option of redeveloping Goodison Park - but this would fly in the face of their long-held contention that this option is financially impossible.

Everton could reopen talks with Liverpool City Council on new locations - but past relationships have been strained with leader Warren Bradley once claiming the Kirkby plan was akin to "building a cow shed in a small town."

Bradley, who is a staunch Evertonian and advocate of a shared stadium with Liverpool, insisted on Thursday morning that his door was always open. Whether Everton wish to walk through it is another matter.

A shared stadium is the common sense answer to the mutual difficulties of both Merseyside clubs as they struggle to build new grounds. It is unlikely to happen unless there is a seismic, and probably unthinkable, shift in philosophy on both sides of Stanley Park - and even then two clubs short on hard cash would need to find ways to pay for it.

The "Destination Kirkby" move, or "Desperation Kirkby" as it was labelled by those standing firm against the idea, was trumpeted as "the deal of the century" by Everton's then chief executive Keith Wyness in July 2007.

Supermarket giants Tesco, driven by chief executive and Everton fanatic Sir Terry Leahy, were going to plough in a reported £52m to help finance the stadium as the focal point of a huge retail development in Kirkby.

Knowsley Council would provide the land, Everton would have to find the not unreasonable sum of £78m to finish off the job. Sounds simple.

But the so-called "deal of the century" did not find favour with everyone, especially a group of fans who adhered closely to the old adage that if something looks too good to be true, then it usually is.

The major point of contention among Everton fans was not the need for a new stadium, a reality accepted by the majority, but the location of the new home Kenwright intended to set up, outside the Liverpool city boundary in Kirkby.

It was an issue that provided a point of unity for the protesters, especially when Liverpool fans openly revelled in the idea of Everton leaving the city clear for their arch-rivals from Anfield.

Throw in concerns over transport links, the revelation from Tesco consultants DTZ that the new arena would be "a mid-level quality stadium" - a phrase that aroused much suspicion among those opposed to the move - and some good old-fashioned emotional attachment to Goodison Park and the battle lines were drawn. 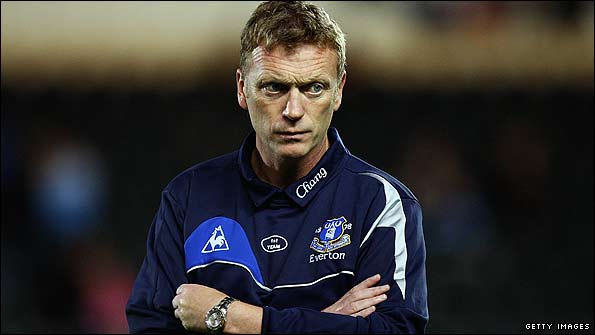 KEIOC insisted on Wednesday night: "This was never a boundary issue, it was a location issue. This stadium would have been nine miles outside the city centre, further from a city centre than any other Premier League ground."

This will be seen by KEIOC as a victory for people power at "The People's Club" - and who can blame them? It is certainly a morale-sapping and damaging defeat for Kenwright and chief executive Elstone, who was championing the cause of Kirkby as recently as Monday.

Elstone was especially strident in recent times in dismissing suggestions a rebuilt Goodison Park could be the answer, or that there was an alternative within Liverpool that would be accompanied by the financial benefits of the Knowsley and Tesco tie-in.

And Everton claimed a new stadium, complete with lucrative revenue streams it would bring, was the only way forward on the path to restore one of the game's great old institutions to its former glories. Today that ambition lies in tatters.

Goodison Park is a grand stadium steeped in history and with a unique environment, but even its most ardent admirers would have to accept the old place is rough around the edges.

The trick for Kenwright has been to find an acceptable, financially viable project that would appease the traditionalists. And he has not been able to do so.

If Everton have a Plan B they must reveal it swiftly. The stadium rejection reinforces the feeling that they are being cut adrift off the pitch as close rivals Aston Villa, Spurs and Manchester City overpower them with financial muscle.

And there are also worrying signs on it as a disappointing season continued with defeat at the KC Stadium, complete with a performance manager Moyes called "shocking".

It is against this backdrop of uncertainty that Everton's troubled neighbours Liverpool arrive at Goodison Park for the Merseyside derby on Sunday.

In Kenwright's perfect world he would like to stay at Goodison Park. Everton are staying there, at least for now, after the government's decision - but the world for Kenwright and his regime is far from perfect.