Man City challenge is no fake

The £50 notes waved under Gareth Barry's nose as a sign of lingering displeasure at his decision to leave Aston Villa were fake - but the Manchester City revolution he chose to join looks increasingly like the genuine article.

Barry stood accused of following the Abu Dhabi millions to Eastlands when his long-stated ambition to play Champions League football was shelved in order to join a club that could not offer him any form of European football.

Ill-feeling still hung heavy in the air when he made his first return to the club where he played with distinction for 11 years, from the derision as he stepped off the Manchester City team bus after it pulled into Villa Park on Monday evening to fans waving wads of counterfeit cash in his direction.

Barry drew applause from many respectful Villa fans, but as the bus pulled away after an entertaining game between two teams with designs on breaking up the Premier League's top four cartel, he will have had no reason to regret his move.

Villa, bursting with energy and endeavour, had that top-six look. Manchester City, with some defensive fine tuning, resembled a side and a squad that can seriously threaten the Premier League's established order.

Martin O'Neill had no doubts when asked: "If we are talking about threatening the top four, then absolutely. They are a really good side. They have strength in depth. They are capable of pushing on."

It was a night of sub-plots at Villa Park and they did not disappoint. Barry was back at the club he left amid acrimony, while Aston Villa's own new boy Richard Dunne was in opposition to the club he served splendidly for nine years. 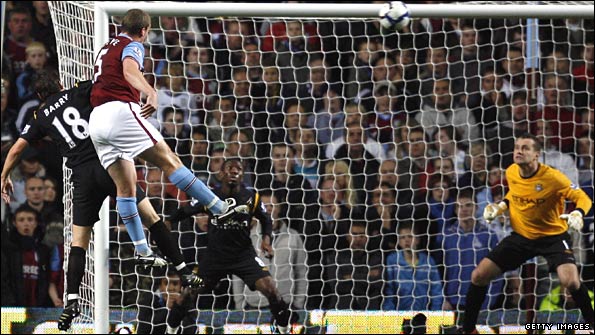 And the pair met in a moment that summed up the contrasting emotions among supporters as Dunne rose above Barry to put Villa ahead. As the ball hit the back of Shay Given's net, Dunne pointedly refused to celebrate the goal.

A section of City fans, recognising the gesture of respect and having already given Dunne a standing ovation when his name was announced, broke into spontaneous applause in a moment of class and dignity a million miles removed from the shoddy antics of Emmanuel Adebayor and the baying of Arsenal's fans at Eastlands a few weeks ago.

Dunne then proceeded to give a mountainous defensive display, alongside the impressive James Collins, that actually suggested City may have been hasty in engineering a move the player claimed was done behind his back.

If there is a flaw in the expensive Eastlands rebuilding programme, it is currently the central defensive partnership of Joleon Lescott and Kolo Toure. They each look like they would benefit from playing with a leader and powerhouse such as Dunne as opposed to alongside each other.

If we are talking price tags, £24m Joleon Lescott did not look worth four Richard Dunnes.

Early days yet and Hughes will be aware this is a work in progress, but City's vulnerability to high balls has clearly been noted and no O'Neill team was going to be shy about prodding that weakness.

Dunne's swift goal provided another test for a City team that, because of the money invested in it, is undergoing an almost forensic examination into whether it has what it takes to go the course and finish in the top four.

Villa have lofty ambitions of their own and, perhaps inspired by the sight of Barry, were in the mood to put City through the mill. They succeeded for long periods, but this was another severe test that City passed.

Many City sides of recent vintage would have fallen in the face of Villa's impressive early onslaught. Not this one. As at Manchester United they hung in gamely, although Hughes' face was a picture when five minutes of stoppage time went up, and were the dominant force after Craig Bellamy's spectacular second half leveller.

If anyone should have felt threatened by the arrival of £68m worth of attacking talent strolling through the door of Eastlands this summer in the shape of Adebayor, Carlos Tevez and Roque Santa Cruz to join £32m Robinho, it should have been Bellamy.

And yet if City are to make the top four, then Bellamy will emerge as a key figure if he maintains his current mood.

The Wales striker is not burdened by modesty, and it is clear that rather than shrink from the challenge of fighting for his place he has risen to it. If Hughes can perfect this trick all over the park then City really are in business.

I questioned Hughes about whether the expensive superstars had galvanised Bellamy into producing this golden spell and he said: "He always thinks he is the best player on the pitch and to be fair for most of our games this year he has been. He views guys coming into the team as a challenge. He wants the shirt and is playing in a way that makes it his by right."

Hughes is the manager who pushes the right buttons with Bellamy. He fell foul of Graeme Souness at Newcastle and a stint at his boyhood idols Liverpool looked too big for him. He has flourished under Hughes with Wales, Blackburn and now Manchester City.

And Stephen Ireland, in a second half cameo, showed the wisdom of maintaining the excellence of the Eastlands academy. All feints, first-time passes and piercing runs, he may not have cost a penny but has a natural gift that allows him to sit neatly alongside any expensive superstars that will arrive in future.

Ireland provides a real balance in midfield alongside Barry, who was not at his best at Villa but is a mature figure who can be a figurehead for City.

Villa have young talent of their own, and players like Ashley Young, Gabriel Agbonlahor and James Milner will have caught the eye of watching England coach Fabio Capello.

Stewart Downing is still to come, and with a squad beefed up in numbers by O'Neill, Villa will hope to avoid the collapse that sabotaged their own top four ambitions last season.

They will provide anxious moments for the top four, but questions remain about whether they can break into that elite group.

The same applies to City - and suggestions that they may actually claim the title this season are wide of the mark. Too much transition is taking place for this to be a realistic goal, but the top four must be the marker for Hughes.

In an almost ostentatious show of strength, the City manager's immediate reaction to Bellamy's equaliser was to remove Tevez and send on Santa Cruz. It was an impressive display of resources and the fear for any team teetering in the top four is that City have limitless financial firepower to add in January if they are in touching distance.

Optimistic times for Villa, and from City another a message for the usual suspects near the top of the Premier League that mistakes could be punished more heavily this year than ever before.