Ferdinand must sharpen up

Rio Ferdinand displayed a highly tuned sense of foreboding on the eve of England's World Cup qualfier against Ukraine when he admitted he has no guarantee of a place in Fabio Capello's squad for South Africa.

Ferdinand's concerns centred on fitness as opposed to form - as befits a player who was starting only his third England game in 12 months and had played just 14 of the last 40 competitive games for his country and Manchester United before this international.

Form and fitness go hand in hand at the highest level, however, and Capello's iron glare will be fixed even more firmly on Ferdinand after he was once again caught short as England's 100% record in World Cup qualifying ended in the hostile surroundings of Dnipropetrovsk.

Ferdinand's actual exclusion from England's squad is the unlikeliest of prospects unless he is struck down by injury again, but the pressure is mounting on a player for so long regarded as untouchable in the first-choice line-up.

Capello did not exactly laugh off Ferdinand's error that gifted the Netherlands a goal in the 2-2 draw in August, but he was uncharacteristically generous to claim defensive blunders from England in Amsterdam were "freakish."

He had more consoling words for Ferdinand after his latest aberration, but as the World Cup draws closer Capello will become increasingly unforgiving of mistakes that could wreck all his stated ambitions in South Africa.

Ferdinand was the man at fault when Robert Green claimed an unwanted place in history by becoming the first England goalkeeper to be sent off when he fouled Artem Milevskiy. The Ukrainian had escaped the attentions of Ferdinand, who was initially slow to react then unable to recover as he outstripped him to run into the area.

The unfortunate Green, playing for high stakes himself as the battle to be England's World Cup goalkeeper continues, took the rap but the villain of the piece was the dawdling Ferdinand.

The error was not punished as Andriy Shevchenko missed the resulting spot kick, but the wider context is significant and Ferdinand needs to up his game or face paying the price in a regime, unlike others before it, that does not play favourites or is shaped by reputations.

If Ferdinand is not exactly in a comfort zone, no-one ever is under Capello, then he is at least being cut some slack because of a lack of close contenders for his place. Matthew Upson appears to be his biggest threat, but as yet has not mounted a compelling case to oust Ferdinand.

Ferdinand's regular absences may just have taken a crucial edge off his mental and physical sharpness. He reduced Manchester United manager Sir Alex Ferguson to a hair-clenching, leaping figure of fury when an arrogantly misplaced flick gifted a late goal to Craig Bellamy in the recent Manchester derby.

Michael Owen's late winner allowed Ferdinand to wriggle off the hook, but there may be no escape at a World Cup, so it would be a major surprise if Capello does not make his point with force.

If Ferdinand demonstrates his true quality and maintains fitness, then he will form the cornerstone of England's defensive plans alongside captain John Terry. On this, and more recent evidence, he has ground to make up in both departments. 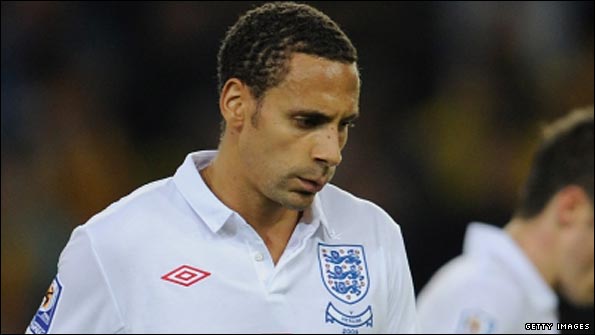 He was part of a sloppy England defensive performance that served as a timely reminder that work remains to be done before all the inevitable optimism that will accompany Capello's side on the plane to South Africa can be fully justified.

Allowances must be made. England had swept through their previous eight qualifying games with a perfect return - their job is done and they were confronted by a team with much still to fight for.

And it showed in the environment that greeted them, with the game twice being held up as flares were thrown on to the pitch, causing a hold up after only two minutes. Further interruptions forced referee Damir Skomina to threaten an abandonment and the Football Association to prepare an official complaint.

But there is still no place for the slackness on show defensively, particularly from Ferdinand, irrespective of England's successful campaign so far.

England captain Terry, and the outstanding Wayne Rooney were the two star performers, with even Ashley Cole dipping below the sky-high standards he has maintained for Chelsea.

For Green, the fall-guy for Ferdinand's failings, his prospects of starting in the World Cup were undermined by his failure to last the first 15 minutes, but there must be a measure of sympathy for the West Ham United keeper.

He was placed in an impossible position by Ferdinand and Capello will not let the red card count against him - but he saw rival David James take advantage of his misfortune.

James, seemingly Capello's preferred choice for South Africa, distinguished himself with fine saves from Yaroslev Rakytskyy and Andriy Yarmolenko and drew praise from the England coach.

England's fluency was affected by their numerical disadvantage and the early sacrifice of the pace and width of Aaron Lennon to compensate for Green's departure. Steven Gerrard's groin injury, which resulted in his substitution at half-time, did not help matters either.

Capello, however, will draw consolation from the way England dug in and survived long enough to have the home crowd anxious that a crucial win might be cast aside in the closing stages.

Rooney - how Capello must pray no misfortune befalls him - set a magnificent example with his tireless running and probing throughout, and if he had levelled affairs with a late show that flew inches wide, no-one but the Ukrainians would have begrudged him.

England's superb efforts in qualifying ensured there could be no serious harm done against Ukraine - but Ferdinand was given a sharp reminder of the cost of carelessness and the potentially prophetic nature of his words before the game.