Didier Drogba - if Rafael Benitez's agitated and animated body language is an accurate guide - was a massive source of irritation to Liverpool. And that was just when he was lying motionless on the Stamford Bridge turf.

Drogba, a bizarre mixture of toe-curling amateur dramatics and fearsome attacking threat, was even more of a nuisance when upright, on his feet and punching holes in Liverpool's Premier League title credentials.

The Ivorian's contest with Fernando Torres was billed as a heavyweight confrontation wrapped within Chelsea and Liverpool's battle to make an early statement of intent to challenge Manchester United's domestic domination.

There was only one winner. Drogba may spend more time on the deck than any glass-jawed boxer, but he delivered crucial blows while the subdued Torres barely laid a glove on Chelsea. 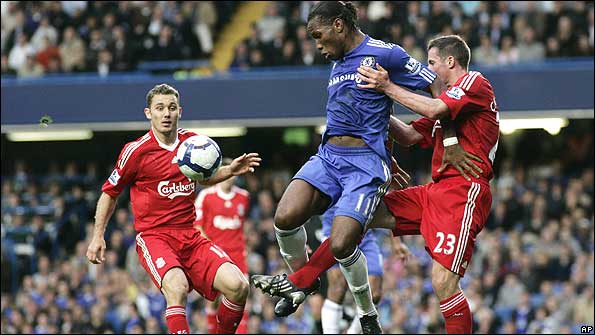 Benitez navigated his way around any inquisition about Drogba's antics. He has more to worry about than Drogba after a third defeat in eight league games raised fresh doubts about Liverpool's capacity to end a 20-year wait to win the title.

Drogba showed all sides on his nature in a game settled by fine margins, but one deservedly decided in Chelsea's favour. Call him an old ham. Call him a drama queen - but never call him anything less than a world-class striker.

On one occasion, Chelsea captain John Terry even appeared to suggest to Drogba that he might be better served getting up and getting on with it rather than making another appointment with the Stamford Bridge physio.

This was one of many priceless interventions from Terry, because Drogba's main talent is playing with the sort of power, drive and ruthless pursuit of opposing defenders that set up goals for Nicolas Anelka and substitute Florent Malouda.

Torres, in contrast, had a laboured and fruitless afternoon. He started a physical confrontation with Terry that he was never going to win with a nasty early challenge, an ill-judged move that only appeared to inspire Chelsea's captain in his efforts to snuff out Torres, a personal battle he won long before the final whistle.

If there is a minor flaw in this great striker's make up, it is a tendency to became side-tracked by pointless bickering instead of inflicting damage with his ability. He has been bogged down by side issues on three occasions this season, when Liverpool have played Spurs, Aston Villa and now Chelsea.

Liverpool fans, and perhaps Torres, can work out for themselves what is the common denominator in those three results.

If Drogba provided the muscle in Chelsea's win, Terry was the heart and soul. He was withering in his assessment of Chelsea's performance in defeat at Wigan - and he led by example here.

When Anelka put Chelsea ahead on the hour, Terry cut short his celebrations to gather his team-mates around him and order total concentration. When Malouda settled affairs deep into injury time, Terry's release of emotion was an illustration of the importance of this victory.

It was fitting that the final act of the game was Terry rising imperiously to clear a corner before leading a communal huddle of elated colleagues. He was an immense figure for Chelsea.

And for coach Carlo Ancelotti, it was a win that put another layer of gloss on his reputation. Luiz Felipe Scolari's early successes were exposed as a false dawn when Liverpool won at Chelsea last season - no such problems for Ancelotti.

Ancelotti has made the partnership of Drogba and Anelka work, while he showed his willingness to be flexible by withdrawing Frank Lampard from the point of Chelsea's midfield diamond formation.

It was a not a move that brought immediate success, but it was Lampard who won the ball from Javier Mascherano to start the move that led to Chelsea's first goal. The record shows he is more effective arriving late in the area and Ancelotti's switch appears to be a recognition of this.

Chelsea were also well-served by stand-in keeper Hilario, in for suspended Petr Cech. After questioning his ability in the build-up, it is only right his faultless contribution is acknowledged here.

ln Benitez's words they were "not bad." He was right because Liverpool were not bad, but not bad never wins Premier League titles and they were found wanting in crucial areas.

Liverpool, while lacking serious ambition, were coping until Anelka ended the stalemate, but the dash and verve that illuminated their final three months of last season has not been present against a better class of opposition this term. 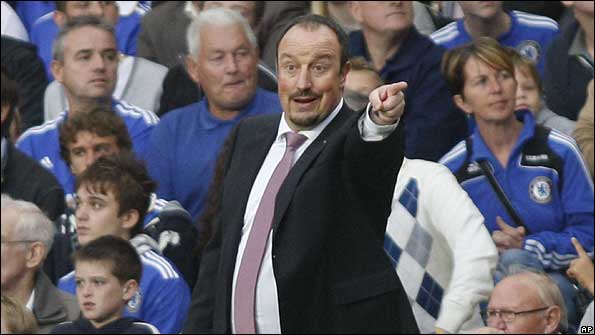 Benitez's team selection also begs questions. The exclusion of Yossi Benayoun for Albert Riera was mystifying. He drifted around the edge of affairs, looking more the player he was on loan at Manchester City than the Spanish international Benitez splashed out on.

And while it is understandable that the temptation to tuck Steven Gerrard just behind Torres is almost irresistible, surely on this occasion the captain would have provided a better midfield contrast to Mascherano than Lucas.

Mascherano and Lucas is a creative vacuum as a central partnership and Liverpool needed more, and will need more. Did the fact Benitez chose not to move Gerrard demonstrate not just his unswerving loyalty to Lucas, but also a lack of faith in Liverpool's attacking undercard?

Jamie Carragher and Martin Skrtel gave cause for hope with an improvement on performances in recent weeks, but they could not deal with Drogba and Anelka when it counted.

Xabi Alonso gets better with every game he doesn't play for Liverpool, while the pressure on Alberto Aquilani to deliver grows with every day he edges towards eventual fitness.

After tipping Liverpool as title winners this season, I asked Benitez whether he felt Liverpool had enough improvement in them to claim the Premier League this season.

He responded: "Our target is just the next game. We have had three defeats this season, which everybody keeps telling us, but I think it is important to keep calm, keep improving and keep doing well. We have to focus on the next game."

Benitez sought some solace in defeat by suggesting Liverpool are now winning more games this season while they were guilty of drawing too many last term. In other words the points might even themselves out this time around even if Liverpool lose more matches - risky logic this.

Six points off the top hardly represents crisis time for Liverpool, but they lack momentum and Benitez cannot rely on what he sees as a more unpredictable Premier League throwing up results like Wigan beating Chelsea or Burnley beating Manchester United.

It's early days still and, as Benitez says, no time for panic. There is no shame in losing to Chelsea but Liverpool have lost to the four best teams they have met this season at home and abroad - there is no shield against this reality.

For Chelsea coach Ancelotti, it was a satisfactory end to a week that brought ludicrous suggestions that he was under pressure after his first league defeat and a scratchy Champions League victory.

The Italian was at his deadpan best as he dismissed the scare theories and delivered the line: "Football is the same the world over."

Not quite Carlo. Not every team has a Didier Drogba. And for all his faults Chelsea were grateful they had him to see off Liverpool and return Ancelotti's side to the top of the table.