Rafael Benitez wore the haunted look of a man who had just heard the first sounds of revolt inside Anfield - a loud and clear signal that pressure is mounting on Liverpool's manager.

Benitez, even in his times of greatest turbulence, has always been able to call on the unswerving support of the majority of Liverpool's fans, with many even prepared to take to the streets in a show of loyalty when life got tough.

So it was a moment of some significance and a sign of the times when Benitez was the target for Anfield's anger during the Champions League defeat against Lyon, a reverse that threatens their long-term ambitions in the tournament and capped their worst sequence of results since April 1987.

When Benitez inexplicably removed Liverpool's most dangerous performer, goalscorer Yossi Benayoun, and sent on Andriy Voronin with five minutes remaining and the game poised at 1-1, Anfield reverberated to the sound of patience snapping as jeers rang out.

Lyon punished this flawed logic as Cesar Delgado rounded off a depressing evening by sliding in a stoppage-time winner - to leave Benitez facing the biggest test of his five-year Liverpool reign. 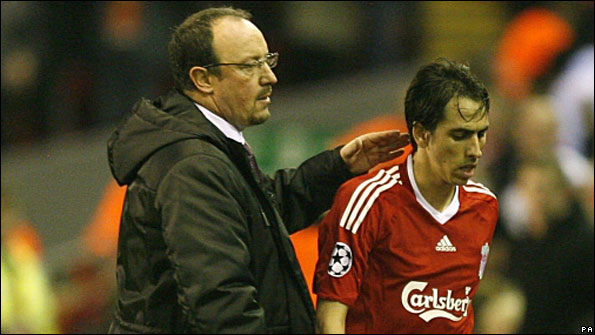 Benitez was booed for his decision to substitute Benayoun

Benitez cut a sombre, unsettled figure as he conducted his post-match briefing, looking as downcast as he has at any time during his Anfield tenure. Off the pace in the Premier League and struggling in the Champions League, the voices of discontent will only get louder unless the slide is arrested quickly.

He is not accustomed to the sort of noisy public dressing down he received from Liverpool's fans, explaining that Benayoun was tired and he wanted "fresh legs and quality" - not attributes immediately obvious in the journeyman Voronin.

It was a baffling move and while Liverpool's followers are notoriously slow to voice displeasure against any manager, this time it was understandable - the first serious sign of dissent Benitez has faced and an obvious indicator that all is not well at Anfield.

Benitez has made a habit of pulling off results when his back has been pushed firmly against the wall - and how he needs Liverpool to do it again for him on Sunday when Manchester United come calling at Anfield.

Victory, and Liverpool must now draw on memories of their double over United last season, and suddenly Benitez's status would be repaired. All at Anfield would feel better about the season and themselves.

Defeat, which would open up a 10-point gap between the clubs, would have those of us who tipped Liverpool for the title sticking our heads in the stocks awaiting the arrival of the rotten tomatoes. It would also leave Benitez in the uncomfortable and unforgiving environment of having to attempt crisis management.

Benitez has taken Liverpool to the Champions League precipice before and pulled back, but this defeat lands them in desperate trouble and the consequences of failure to reach the last 16, both in a football and financial context, are almost too dire to contemplate.

Liverpool co-owner George Gillett was in town on Tuesday and he will not need to be told that his chances of successfully wooing new investors will be damaged considerably by a drop into the Europa League.

Benitez can offer up some mitigating circumstances and it would do him a personal injustice not to list them.

Liverpool were already without Fernando Torres even before Glen Johnson pulled out before kick-off with a groin injury and after 25 minutes of ambling around looking patently unfit, captain and major hope of salvation Steven Gerrard limped off with a recurrence of his groin injury.

Johnson's youthful replacement Martin Kelly was excellent, although it is a sad fact that he will inevitably be shunted back to Anfield's margins when the England defender is fit.

And the spirit an under-strength Liverpool showed for much of the evening was commendable. It was not a shortage of effort that undermined Benitez's side.

But Liverpool's resolve waned ominously once Maxime Gonalons levelled Benayoun's opener and the lack of top quality when you scratch beneath the surface of Benitez's main players became painfully obvious.

Lyon grew in confidence and self-belief as Liverpool's drained away visibly. It was not simply a lack of quality, it was a lack of confidence. The pain of defeat, and of this wretched run, was etched grimly on Jamie Carragher's face as he made his way around the Anfield pitch an hour after the final whistle.

This was the season when Liverpool set their sights on ending Manchester United's supremacy after a magnificent end to the last campaign - there is still time but every performance raises fresh doubts.

The cynics who accuse Benitez of spending five years assembling a two-man team are harsh, but no-one can escape the huge reliance on Torres and Gerrard. It is a misfortune on the scale of seeing a beach ball tuck away the opposition's winning goal that they are both struggling again with injury at the same time.

And while it is fashionable to sling mud in the direction of Gillett and co-owner Tom Hicks when looking to locate Liverpool's ills, they should not be used as a permanent shield to protect Benitez from criticism.

Injuries aside, it was hard to justify Benitez's decision to play David Ngog against Lyon. He is a promising youngster who looks short of top class - so why not use experienced international Dirk Kuyt up front or even Ryan Babel, who could not get a look in from the bench?

Has Babel's star fallen so far since his arrival as an £11m player of rich promise? It would appear so.

And when a change was being considered, surely the removal of Ngog would have made more sense than the unpopular withdrawal of Benayoun? This is not an attack on Ngog, simply a belief that Benitez had better options to explore and failed to do so.

It also emphasised Liverpool's lack of attacking quality behind Torres.

Michael Owen will spend Sunday lunchtime being accused of gross treachery and disloyalty at Anfield for joining the sworn enemy Manchester United. Nonsense of course. Owen would have happily joined Liverpool had they wanted him but they did not -and on a free transfer he looks a better bet for goals than Voronin and Ngog.

Alberto Aquilani may get a reserve team outing against Sunderland on Wednesday, but Benitez now faces the unpalatable prospect of finally being able to call on his biggest summer signing, the replacement for the lamented Xabi Alonso, only after serious damage has been inflicted on their prospects of success at home and abroad.

Benitez's predecessor Gerard Houllier was in attendance at Anfield on Tuesday watching two former clubs, looking in good health and being warmly received by supporters.

Houllier knows only too well the weight of Anfield expectation, his past successes meant nothing when he was sacked in 2004 after only finishing fourth in the Premier League.

There is no suggestion Benitez's job is under threat - nor should it be with the season only in its infancy and having been handed a new five-year contract just months ago.

And his escapologist's knack of conjuring up exactly what is required to manouevre his way out of hazardous situations means it would be folly to underestimate him.

Manchester United will be a test for Benitez but also an opportunity - he will know a win on Sunday could spark life into Liverpool's season.

But the outbreak of unrest at Anfield against Lyon, almost unheard of in the Benitez era, must also tell the manager that Liverpool's campaign has already reached a critical point.