Ferguson is the Premier League's most calculating orator when it comes to public pronouncements on the opposition facing Manchester United.

If you are studiously ignored by Ferguson - or even worse if he is nice or complimentary about you - then it is a safe bet he does not regard you as a threat to Old Trafford's continued supremacy.

It is a belief held by many that his frosty, and occasionally pizza-stained, relationship with Arsene Wenger has magically thawed at a time when Arsenal no longer win trophies.

So when Ferguson chooses to attack Manchester City for being "cocky" and downplay their 100% record in the Premier League campaign as being the result of a "softish" start, then boss Mark Hughes should be flattered as opposed to insulted.

The latest attack comes after an even more withering verbal assault in July when the newly-emboldended Eastlands regime used a giant poster of Carlos Tevez, signed from United, near the city's commercial heartland emblazoned with the words "Welcome To Manchester". 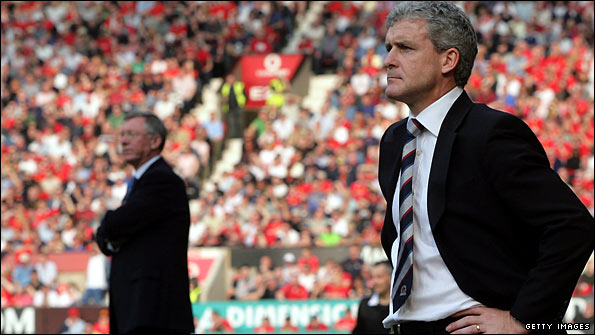 Was it pointing out that Manchester United's home is not technically in Manchester? Was it suggesting that Tevez - a cult figure at Old Trafford as supporters constantly pleaded for Ferguson to "sign him up" - had now found a more fitting home in the city?

Whatever its intention, it brought an icy blast from Ferguson as he said: "It's City isn't it? They are a small club with a small mentality. All they can talk about is Manchester United; they can't get away from it. That arrogance will be rewarded. It is a go at us, that's the one thing it is. They think taking Carlos Tevez away from Manchester United is a triumph. It is poor stuff."

In truth it was actually a pretty lame attempt at a wind-up - but Ferguson's response at least confirmed to one-time Old Trafford icon Hughes that they were on the old master's radar. And that usually means you are doing something right.

The other side of the coin is that it is not always wise to make Ferguson and Manchester United angry and you can bet your bottom dollar the idea of a very large element of payback will add extra spice to Sunday's derby at Old Trafford.

Manchester United will see this as the chance to put Manchester City firmly in their place - to slap down their mega-rich neighbours and remind them of their true place in the Premier League pecking order.

For Manchester City, it is the biggest opportunity yet to measure their huge rebuilding programme against the most accurate template of all in the modern era, a club that has won the title for the last three seasons and thrown in a Champions League triumph for good measure.

On visits to City this season, I have not found a cocky club. I have found a club revelling in an incredible surge of optimism thanks to their Abu Dhabi riches and the arrival of genuine quality in the squad.

And if City do feel they can take on Manchester United then this is surely good for football, as is any challenge that fires up Ferguson even further (if that's possible) in pursuit of renewed successes.

City were visibly buoyed by the victory against Arsenal at Eastlands. How sad it was that a win that should have been paraded as a sign of their progress should be buried under the avalanche of ill-feeling provoked by Emmanuel Adebayor's ridiculous antics as he taunted Arsenal's fans as well as raking Robin van Persie's face.

United had a little win of their own last Saturday - namely an outstanding victory and performance at Spurs, inspired by a wonderful display from Wayne Rooney.

It does not pay to tweak the lion's tail and there will be an extra glow of pleasure on Ferguson's face if City are swept aside on Sunday. Expect that familiar clenched fist to the Stretford End if three points are secured.

So the stage is set for a classic. It is a pity for City that some of the key protagonists will not be taking part.

Perhaps those who thought Adebayor was justified in any of his actions last Saturday might like to reflect on his wisdom now, as he sits suspended on the margins of Old Trafford, with Robinho still out, Roque Santa Cruz still rehabilitating (the joke is that Santa might be ready in time for Christmas) and Carlos Tevez struggling with a knee injury.

If any of those attacking resources had been fit then City's current confidence levels could have risen another notch. Make no mistake, they feel in the mood to present a forceful challenge to United - but it would have been so much easier with Adebayor available, especially in his current form.

The visit to Old Trafford will also provide a stern test for City's revamped rearguard and the expensive central defensive partnership of Kolo Toure and Joleon Lescott.

Rooney's display at White Hart Lane contained all the elements that make him such a magical player. He is not simply about natural gifts, he is about work-rate, passion and an ability to buy into the team ethic Ferguson holds so dearly.

He will be the weapon Ferguson will want to use to inflict pain on a team and a club he clearly feels are getting ideas above their station. The Scot's observation that he has always viewed the meeting with Liverpool as United's real "derby" is presumably calculated to place City's actual significance to his team's chase for honours into sharp relief.

City's naked ambition has added another layer of intrigue on to what was always going to be an eagerly-anticipated encounter.

In reality, City will not emerge as title rivals to United this season - it is too early in such a major transition for that sort of talk to carry even a crumb of credibility.

But the simple fact that they have captured Sir Alex Ferguson's attention so publicly can be regarded as a sign of serious progress.