Sir Alex Ferguson - in an attempt to put the club he disregards as "noisy neighbours" in their place - claims he counts Manchester United's confrontation with Liverpool as the real local derby as opposed to the domestic squabble with Manchester City.

Ferguson's words were just one more swipe in a week liberally sprinkled with barbs slung from both sides of Manchester in the preamble to a 96-minute Old Trafford classic. And when horse racing fan Michael Owen won this particular derby the old streetfighter gave the game away.

Amid wild scenes of chaos, joy and despair, Ferguson turned the clock back to 10 April 1993 when a Steve Bruce goal against Sheffield Wednesday effectively won the Scot his first Premier League title.

As Owen's goal hit the back of the net and Manchester City manager Mark Hughes attempted to decipher the logic of a winner being scored six minutes into four minutes of stoppage time, Ferguson was almost lost in ecstasy. 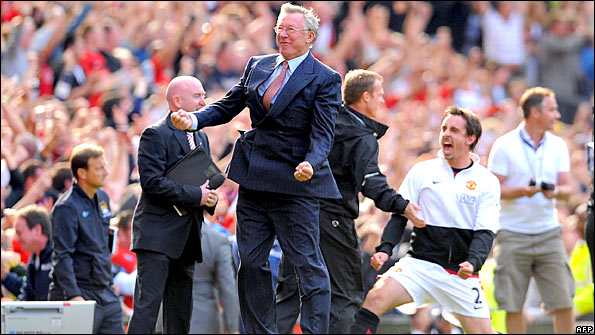 He charged around on the touchline, like a dancer who has taken to the floor without musical accompaniment, jigging with players and staff - while also considerately sparing a thought for the stricken City fans with an emphatic and defiant double-clenched fist salute in their direction.

So if this really is the game he rates below beating Liverpool, then he was either indulging in a very obvious wind-up or stand well clear next time United turn over Rafael Benitez's side. Appearances made it look like one of the sweetest victories of his career.

Despite apparently playing down the signficance of the fixture, this meant a lot to Ferguson. He wanted victory so badly to remind City where the power lies in Manchester and when he got it was happy to show his delight to the world.

It was tumultuous end to a derby - a real derby - that deserves every superlative that will be heaped upon it as well as maybe a few expletives from Ferguson and Hughes provoked by shambolic defending.

Ferguson's explosion of elation was a testimony to the fire that rages inside whenever he sees a threat to Manchester United's domination and also a tribute to Manchester City who, despite what he may say, he can definitely see in his rear view mirror.

Hughes kept his composure in the aftermath of a contentious conclusion but issued ominous words of warning to all, especially Ferguson, when he said: "We're not going away any time soon. We are around for a long time. I can assure everyone of that. We have got the means, resources and will to be better in the future and that is what we are going to do."

And you believed him. Every word.

Hughes' main bone of contention was how fourth official Alan Wiley's board went up for four minutes of stoppages and United struck well into the sixth. The explanation was the length of time City spent celebrating their third equaliser, plus a substitution - but it was not one that satisfied Hughes.

The timings have since proved to be borderline but remember four minutes was a "minimum" and it should not be ignored that the time was added on for City as well as United. Their respective priorities in those extra minutes, however, were different.

So often a game that has been preceded by hype and harsh words is followed by a damp squib. Not a bit of it here - this outstripped the hype by a distance and will never be forgotten by anyone lucky enough to witness it, for good and bad.

I was fortunate enough to cover Liverpool's 4-3 win against Newcastle United in April 1996 in a previous existence. It is a game offered up as a prime example of the best the Premier League has to offer. You can now put Old Trafford in September 2009 snugly alongside it.

Take the scenes after Owen's expertly taken finish. United's players and fans barely able to contain themselves, Gary Neville running down the touchline with more than an eye on City's supporters, City's players slumped in agony. Craig Bellamy appearing to cuff an idiotic pitch invader, Ferguson doing a brisk march to the tunnel after a brief handshake with Hughes and Hughes almost punching the face off his watch in fury at the amount of added time.

This was a game were sub-plots could be uncovered everywhere, even before kick-off.

There was Carlos Tevez's return to Old Trafford after being paraded as City's new poster boy in a very obvious challenge to United's domination. There was City's new wealth that allows them to rival, and even eclipse, United in the transfer market. There was City boss Hughes' very public declaration of his club's plan to knock United "off their perch" - an ironic echo of Ferguson's own stated intentions towards Liverpool at the start of his Old Trafford reign.

It was all there. We just needed the match - and we got it. "The best derby of all time" announced a euphoric Ferguson, forgetting momentarily that his real derby was meant to be against Liverpool.

As for the match itself - where do you start? A good place is with the simple truth that United fully deserved to win, despite a performance from City that once again suggested they will be a danger to the best this season.

Indeed, for a spell after Gareth Barry cancelled out Wayne Rooney's early strike, City were the more accomplished side and Tevez's dreadful miss when he hit the post in front of an open goal seconds before half-time was pivotal.

In the second half, City were penned in and pummelled by United, inspired by a magical performance from Ryan Giggs. The years fell like scales from Giggs as he was behind every United attack - creating three goals and almost scoring a couple himself.

If we were tempted to start writing the obituaries on a wonderful career, we can put the pen and paper away for a very long time on this compelling evidence. Giggs was the best player on the pitch.

Darren Fletcher and Bellamy exchanged goals of varying degrees of quality before Owen made the defining contribution with the sort of finish that might just open an old England argument if he maintains his fitness.

The pass from Giggs was perfect but Owen's first touch and clinical dispatch showed again that there is still ice in his veins when presented with a crucial chance, even amid the near hysteria that had descended on Old Trafford when he took the ball in his stride at the Stretford End.

Ferguson's description of Owen as "world class" took on greater resonance when his ruthless strike was set alongside Tevez's botch of an easier opportunity.

For Owen, it was a moment of sweet relief, a moment when Cristiano Ronaldo's one-time number seven shirt finally looked a comfortable fit. The hitherto fragile bond between Owen and the United fans who still picture him in the red of Liverpool was sealed.

United's victory must not blind Ferguson to genuine concerns for him and England coach Fabio Capello in a World Cup season.

It is almost the accepted wisdom that Ben Foster is a regular England goalkeeper of the future. He is not - or at least he should not be in his current condition.

Foster had already almost been caught in possession by the time he gifted possession to Tevez for Barry's goal. And his positioning when Bellamy scored City's third goal was miserable, allowing the striker to beat him with ease at his near post.

And then we come to Rio Ferdinand. Struggling for form and fitness - how grateful he should be for Owen's intervention after he was at fault, along with Foster, for that Bellamy goal.

Only he will know what possessed him when he attempted an arrogant (not to mention utterly hopeless) flick over Martin Petrov in the build-up. Ferguson was a picture on the touchline, throwing his hands to his head in a toxic mixture of utter disbelief and rage even before Bellamy then outpaced a labouring Ferdinand to complete the formalities.

You could almost see Ferguson's infamous 'hairdryer' pointing in Ferdinand's direction, especially as he had spent the previous 10 minutes stalking the technical area issuing the clear message not to throw away the three points he thought Fletcher's second goal had given United.

Owen bailed out Ferdinand - and in doing so reminded Hughes and City of work still to be done, especially in defence.

The £40m central defensive partnership of Joleon Lescott and Kolo Toure failed to cope with a second-half bombardment that brought the best out of Shay Given, while Hughes could have expected better than the late panic stations that constantly presented possession back to United.

City will point to absentees Robinho and Emmanuel Adebayor but the failings that pulled the rug from under them were at the other end of the field. City's ambitions will be thwarted until they are solved.

The flaws of both sides only added to the excitement of a thrilling spectacle, as is often the case. And it emphasises the resilience at the heart of United that they have seen off Tottenham and Manchester City, two clubs planning to barge into the top four, even while looking a weaker side than they were last season.

United certainly showed that it will take even more of the Abu Dhabi riches, and certainly more than the odd provocative poster and some well-chosen words, for City to knock them off their perch but they are capable of least giving them a good shove.

And if this was a fight between newly arrived noisy neighbours and the long-time residents at the top end of Premier League territory, then this is an argument that could captivate us all for years to come.