Antonio Valencia is unlikely to be the most high-profile arrival at Manchester United this summer - but that will not spare him from the pressure of intense scrutiny.

Close examination comes with the territory when you are the first newcomer through Old Trafford's door in the wake of Cristiano Ronaldo's £80m departure for Real Madrid.

And the fact that the 23-year-old Ecuadorian patrols a similar footballing beat to the Portuguese superstar will only bring his contribution to post-Ronaldo life at United into sharper focus.

Valencia cannot, however, be regarded as the straight replacement or a Ronaldo-lite. Sir Alex Ferguson will use the huge cheque banked on Wednesday to sign a variety of players to plug the gaps left by Ronaldo's magnificent attacking versatility.

This will be an accurate measure of the influence Ronaldo exerted on United, but Ferguson will back his own judgement - and the verdict of those who have worked closely with Valencia - to support the belief that he has brought a burgeoning talent to Old Trafford.

Valencia has flourished at Wigan after then manager Paul Jewell spent what would ultimately prove to be a profitable day for chairman Dave Whelan in front of the television at the start of the 2006 World Cup.

"When I went over to Germany I watched him play against Costa Rica and England and was really impressed."

The Jewell scouting report was fulsome when he unveiled his new capture, saying: "Antonio is something new for Wigan. He has skill in abundance and combines it with electric pace and a high work-rate. I'm convinced he has the attributes to make a success of the Premiership."

And so it proved, leaving Steve Bruce delighted to confirm Jewell's verdict on Valencia when a £5m permanent deal was sealed in January 2008. He has no doubts about what Valencia brings, saying: "He has pace, trickery, he is as strong as an ox and has a great work ethic."

Bruce is a sound judge of footballing flesh, and he believes Valencia has the touch of box office as well as the raw materials to make him a formidable force in the game.

He says: "Valencia has got that thing which not many players have anymore - the ability to dribble. Someone who can run with the ball, take it up the pitch and beat a man is now becoming a dying breed - there aren't many around.

"We don't produce players who want to dribble, we seem to produce the archetypal steady English player. If a player does want to take his man on and run with the ball, people will want to pay to go and see him."

All fully noted by United on numerous occasions and Ferguson's willingness to part with £16m is testimony to Jewell's talent-spotting and Bruce's nurturing of the quiet Ecuadorian.

But there was nothing under-stated about his talent and the scouts were out in force at regular intervals last season, with United monitoring Valencia for 12 months before finally getting their man.

Real Madrid were serious rivals, an indication that Ferguson may have pulled off a coup. while Bayern Munich and Liverpool made inquiries. Spurs and Aston Villa were also suitors until it became clear he was destined for one of the Champions League elite.

Wigan chairman Whelan, ever the astute salesman, piled on the superlatives at the very thought of Valencia gracing Old Trafford, almost suggesting his club was about to do United the biggest favour since Howard Wilkinson's decision to allow Eric Cantona to head across the M62 from Leeds United.

Whelan said: "I think Antonio is the best wide right player anywhere and that includes Franck Ribery. If this lad goes to Man United he will be a sensation there. 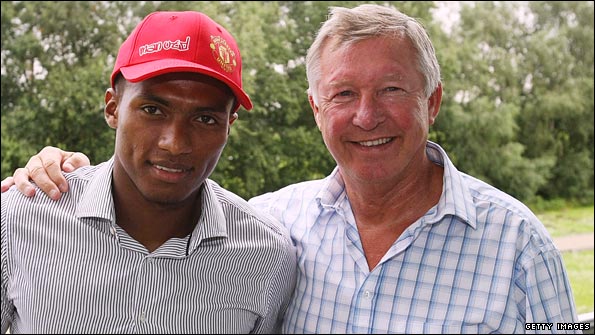 "Within a few months and over the course of a season the United supporters would come to worship this lad. We see him week-in, week-out in games and in training and he's a world-class player.

"He doesn't play the same way as Ronaldo. There is no show or flash, but he's a world-class player and he'll take some replacing. No-one tackles him or takes the ball off him because they can't get near him.

"At the kind of money that's been talked about for Antonio he'd be an absolute steal. United appear to be getting £80m for Ronaldo and they would be paying out a fraction of that for Valencia, so it would be great business because this boy has got immense ability."

Valencia is a more orthodox winger than the attacking all-rounder Ronaldo became under Ferguson's tutelage, but his pace and trickery are right up Ferguson's street, given the United manager's well-known love of wingers.

The question marks remain about Valencia's end product, with his final delivery unpredictable and his goal return of three goals in 31 Premier League games this season unspectacular.

United will study those statistics, and there is no doubt there is an element of the punt about United paying so much for a talent that is, to some extent, unproven and placing it in an arena that has proved too much for bigger reputations and bigger names than Valencia.

Ferguson, it should be noted, has been here before. The same criticisms about a lack of end product were levelled at the teenage Ronaldo before his game was fashioned into the finished article by the Scot.

The Valencia package was on display in microcosm in the opening moments of United's victory at Wigan in May when a searing burst of pace left Nemanja Vidic embarrassed, only for a scuffed and wayward finish to spoil the good work.

United are certain to use Valencia in his familiar flank role, and Ferguson will make more expensive additions around him to compensate for the removal of Ronaldo from his plans, as well as returning Wayne Rooney to the more potent and profitable central role he prefers.

Ferguson will also be an expert guide at reducing the pressure on Valencia as every new face draws comparison with Ronaldo - occasionally unfavourably.

He is the master of moulding raw talent and while Valencia's career bears no serious comparison with Ronaldo, who is only six months older, Ferguson has plenty to work with.

Valencia may represent something of a gamble, and an expensive one at that, but Ferguson's belief in the young Ecuadorian is strong enough to make him take it without hesitation.