Manchester City's prolonged pursuit of England captain John Terry has almost allowed Carlos Tevez to creep in under the Eastlands radar - but the Argentine's imminent arrival will be portrayed as a defining moment by the club's hierarchy.

Robinho's capture was a stunning statement of intent by the Abu Dhabi United Group hours after they took control at Manchester City and they will regard Tevez as another significant marker in their mission to reach the Champions League.

Mark Hughes and Manchester City's millions have attracted big names since their elevation to the game's financial elite, but Tevez is a name known on a more global scale than Gareth Barry, Craig Bellamy, Wayne Bridge or Roque Santa Cruz.

And the fact that Tevez added gloss to that worldwide reputation at Manchester United - and where he was idolised to an exaggerated degree by the Old Trafford crowd - will only add another layer of satisfaction to this deal.

This is not a guarantee that City will gatecrash the top four, but it is an indication of how far they have come in 12 eventful months. The mere suggestion a year ago that City would spirit Tevez across Manchester would have been the cue for laughter or perhaps a short period of incarceration.

Finance will have been a huge driver in this deal for Tevez and to suggest otherwise would be naive in the extreme, but City can afford this deal and plenty more besides.

And they will regard it as an investment well made if he can accelerate their progress in line with the demands of chairman Khaldoon Al Mubarak.

How Tevez adapts to finding out how the other half lives in Manchester after his success-soaked seasons at Old Trafford will be key to the move.

Tevez, in my opinion, will not be a huge loss to Manchester United and his very obvious milking of Old Trafford's affection to apply pressure to Sir Alex Ferguson and the club's board towards the end of the season was lacking in subtlety and occasionally bordering on the provocative.

He did not produce the goals to justify the extent of this adulation - affection he is unlikely to see or hear replicated on his return with fierce rivals City. No-one can ever doubt his application and effort, but United need more if they are to repeat their Premier League title triumph and return the Champions League to the trophy room.

United insisted they were willing to pay the £25.5m to secure Tevez's services, but in reality he was never coming back to Old Trafford at that stage. The point of no return had already been reached.

The absence of Tevez, as well as the departure of Cristiano Ronaldo, makes more room in the middle for Wayne Rooney - a superior talent and goalscorer to the Argentina international.

This, however, does not make him a questionable purchase by Hughes. He is an upgrade on what City currently have and he will be at a club where - and even Eastlands fans must recognise this - aspirations and expectations are currently on an entirely different level.

He fulfils two time-honoured transfer criteria. Is he better than what City currently have? Can they afford him? Yes, and most emphatically yes.

In the wider context, Tevez's arrival and the deadly serious pursuit of Terry, Everton's Joleon Lescott and even the failed attempt to buy Barcelona's Samuel Eto'o is a reflection of a new reality in football.

Manchester City, and the billions that make them major players in the market, are not going to go away. And they may just be revelling in the discomfort of established heavyweights as they exert their muscle. 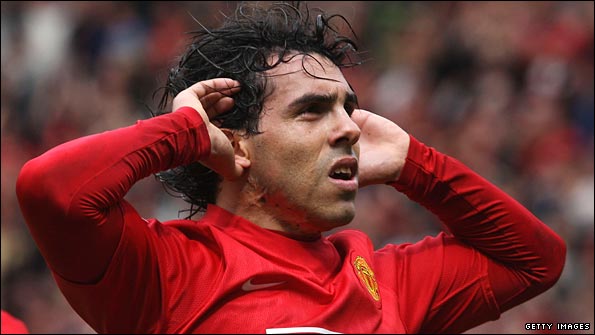 Chelsea have not appreciated City's attempts to strongarm them into selling Terry while Liverpool manager Rafael Benitez made veiled references to Gareth Barry ending up at Eastlands as opposed to Anfield.

Benitez - with his new £17.5m full-back Glen Johnson in very close proximity - complained: "The market is now crazy. It is all money, money, money now."

Which begs the question: If Liverpool's owners Tom Hicks and George Gillett suddenly produced £100m for Benitez to spend, would he insist on handing it back to them on the basis it would advance the game further towards insanity? Possibly not.

Chelsea had no second thoughts about preying on those poorer than themselves and rightly so. It is the financial law of football and always has been.

The problem comes when, as invariably happens, someone bigger eventually comes along and you are on the receiving end. Tough to take when you have had a taste of that power.

There is an element of delicious irony in the boot suddenly being on the other foot - and you suspect there will not be a howling mob gathering at the gates of Eastlands to complain about their club's twisting of the transfer market.

Every supporter of every other club in the Premier League would love to be in City's position now. There will be stumbles along the way - the botched Kaka deal being a prime example - but these are more exciting times then when home-produced talent such as the now returned Shaun Wright-Phillips was heading for the exit.

The so-called "Big Four" is not a cosy private members' club and there is no law against Manchester City, or indeed anyone else, trying to muscle in by whatever means they have at their disposal.

Tevez may not be missed at United but, as a club in the process of major transition, he will enhance Manchester City and this makes the deal sound business for Hughes.

You can follow me throughout the forthcoming season at twitter.com