Arsenal will not miss Adebayor

Michael Owen unveiling a brochure to attract buyers for himself is one thing - Arsenal fans doing likewise to attract a buyer for Emmanuel Adebayor is another.

While Owen's glossy pages spoke of "The Athlete, The Ambassador, The Icon", a replica produced by a group of Arsenal fans made a series of claims on Adebayor's behalf that were not altogether flattering.

According to his Emirates admirers, Adebayor's "brand values" included the Togo striker being "not small...wifi enabled...definitely not lazy..." Not to mention being "better than Marlon Harewood and Mido put together."

You get the picture. To the sound of tongues drilling holes in cheeks, this snapshot of Arsenal's support suggested he would not be missed should he leave.

And this is why Arsenal fans have not been storming the Emirates in fury at the club's decision to accept £25m of Manchester City's Abu Dhabi riches.

The reasoning is that Arsenal's team and bank balance would be enhanced by cashing in on Adebayor - and it is a theory based in sound logic.

Arsenal have bade farewell to a succession of high-profile players over the years, but very few have been sent on their way with such a wave of indifference as Adebayor. When covering Arsenal games last season, you had to try very hard to detect obvious signs of goodwill from supporters towards the player.

Thierry Henry and Patrick Vieira departed with good grace and best wishes, Emmanuel Petit and Marc Overmars to Barcelona and Nicolas Anelka to Real Madrid for a huge profit. Ashley Cole went to Chelsea in exchange for cash and William Gallas amid well-chronicled rancour.

Mathieu Flamini was a regrettable departure on a free transfer to AC Milan, while Alexander Hleb has proved at Barcelona that Wenger got that call spot on.

As far as the Adebayor deal is concerned, the main fear among Arsenal's following is not that the deal will be completed, but that it might collapse.

It is all a far cry from the summer of 2008 when the gifted striker was basking in the achievement of scoring 30 goals in 48 games, a wonderful return that inevitably made him a target for Europe's elite.

AC Milan and Barcelona were among those courted, and even though he eventually signed a new and improved long-term contract, things have never been the same since.

Arsenal's supporters have since, in the main, treated Adebayor with a mixture of reserve and suspicion - and now see the prospect of receiving £25m in exchange for his services as another prime example of manager Arsene Wenger's ability to strike a good deal. 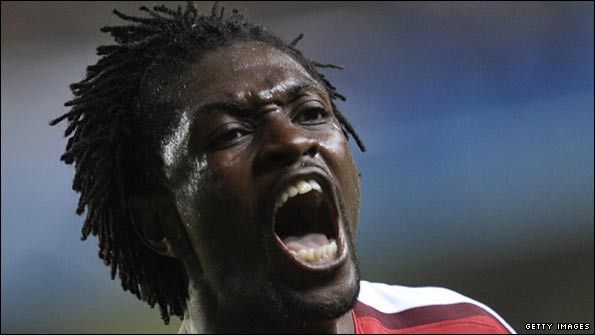 Manchester City's summer signings have all looked to have had a place in the grander scheme. Gareth Barry will provide maturity and quality in midfield, Roque Santa Cruz had his most fruitful goalscoring season under Mark Hughes at Blackburn and Carlos Tevez will provide industry and inspiration.

Adebayor? A goal threat and natural ability certainly, as his brilliant overhead kick against Villarreal in the Champions League proved - but a move to Eastlands does not appear to be the most natural fit.

Arsenal have the striking quality to compensate for Adebayor's absence. Robin van Persie, a more potent and driven player, has committed his future to the club and Andriy Arshavin gave golden glimpses of his quality last season.

Wenger will hope Eduardo, a natural and clinical marksman, can put injuries behind him while Carlos Vela could not be in better hands than Wenger's as he develops a potentially world-class talent.

Nicklas Bendtner is highly-rated by Wenger, who could use the Adebayor cash to add to that weaponry, as well as hunt down the combative midfield enforcer to add physical strength on top of the arrival of £10m defender Thomas Vermaelen.

Bordeaux's Moroccan striker Marouane Chamakh has emerged as a potential target, but as ever Wenger will not be rushed.

Wenger, we can say with some certainty, will have a plan and there is no obvious displeasure that it might not include the enigmatic, albeit lavishly talented, figure of Adebayor.