Alan Shearer blew the dust off an old one by claiming it was better to be a lucky manager than a good one - but Newcastle United's Premier League life may just have been saved by fortune favouring the brave.

Shearer's courage as a player was beyond question and it was a quality he saw in Newcastle United as they beat Middlesbrough at a thunderous St James' Park to take a small, but potentially decisive, stride towards safety.

And as Shearer sat wearing the winner's smile after a five-week crash course in the torture of managing Newcastle, he could also reflect on a fearless subsitution that may yet be seen as a defining moment in his fledgling managerial career.

With Newcastle and Middlesbrough locked at 1-1 - the scoreline from hell as far as their survival prospects were concerned - Shearer chose to haul off his long-time friend and club captain Michael Owen.

It was a high-risk strategy justified by huge reward as Owen's replacement Obafemi Martins took just 55 seconds to score the goal that could change the course of Newcastle's future. 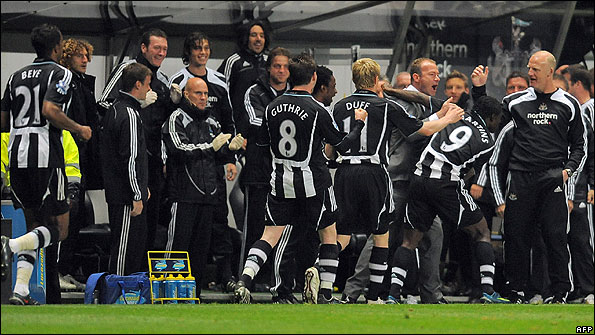 When Peter Lovenkrands, another substitute, added Newcastle's third late on, it only added to the growing sense that Shearer might just have what it takes for this managerial lark after all.

Shearer has cultivated an impassive manner on the touchline since arriving at Newcastle - an image helped by not having one jot to celebrate after forsaking the sofa for the technical area.

But after labelling this as the biggest game he has been involved in with Newcastle, the joy of victory brought signs of the old Shearer back to St James' Park.

Goals were greeted by his trademark celebrations, albeit in a smart suit as opposed to a black and white shirt, and he even advanced on to the pitch at the final whistle to join in the victory celebrations with his players.

Nothing flamboyant of course - he was at pains to point out safety is by no means guaranteed by a single win - but you sensed this was a man who had discovered how victory as a manager tastes and he enjoys it.

And with the word around Newcastle strongly suggesting he will be in charge next season providing he gets reasonable backing from owner Mike Ashley, then there may be more where this came from.

This being Newcastle, no-one should expect this win to be the catalyst for a straightforward march to safety in their final games against Fulham and Aston Villa.

No, that would be too easy woudn't it?

Give Newcastle a mile and they will take an inch, but the passion of this display suggests they may just have a little bit more to offer than Phil Brown's collapsing Hull City.

Shearer hurled superlatives at his players in an effort to maintain their confidence for that final push: "Brilliant...courageous...big, big performances from big men...magnificent feeling."

Not quite Alan - but just the sort of improvement and result needed to send the Toon Army off to Shearer's Bar and The Strawberry in better heart than they had arrived.

And with Shearer demonstrating his ability to make cold, clear-headed decisions in the heat of battle by removing Owen, they made their bids to drink the place dry with renewed hope.

Shearer's next big decision will be what to do after Martins' success? Will he keep his place against Fulham? Will Owen be on the sidelines.

Owen used his programme notes to mount a stirring defence of his record, stating that he believes Shearer was wrong to leave him out against Liverpool recently. He does not appear to have a huge reservoir of affection on Tyneside, but anyone who suggests he does not care does not know Michael Owen.

You sense, however, that his time is winding down at Newcastle. Owen's other appearance in the match programme was modelling next season's new kit - irony anyone?

It was the sort of compelling evening Newcastle United and St James' Park were invented for. Nerves, tension, fear, fingernails chewed, stomach churning - and that was just on the walk up to the ground.

They came from far and wide, one banner was emblazoned "Toon Army Poland", almost in the manner of those gathering at the bedside of an ailing relative, waiting to discover which way it will go.

And while it was all celebration, for now, for Shearer and Newcastle, there was only despair for Middlesbrough manager Gareth Southgate and his players.

Middlesbrough's display summed up so much of their season. Plenty of promise but no punch - it is a deadly combination when you need wins to stay in the Premier League.

Southgate cut an impressive figure after the game, recognising the hurt suffered by Middlesbrough's fans and the entire club, but also placing defeat in context when he said: "All of the difficult nights in my life have been in football, so I have a sense of perspective."

All the sounds coming out of Middlesbrough suggest Southgate will keep his job, even if they are relegated, and this offers us another irony to consider.

Middlesbrough, on many levels, are an example to Newcastle. Indeed there is a case for saying they actually put their near neighbours to shame.

Chairman Steve Gibson does not sack his managers at the first sign of trouble and they have a flourishing youth policy producing local talent that is given its chance. This emphasis on stability is the polar opposite to Newcastle's dysfunctionality.

Some might say this will do them a fat lot of good in the Championship, but Middlesbrough is based on Gibson's sound principles and he is the man who has single-handedly under-pinned all the successes they have had in recent years.

He will be criticised for being too loyal if Southgate takes Boro down, but Gibson's track record tells us he has good reason for sticking with his manager and who can say with certainty that change would have made a difference?

If Shearer stays at Newcastle, you can expect him to study the Middlesbrough model of stability, continuity and the development of homegrown talent.

This is all for the future - and that future suddenly looks a little brighter after the only result Newcastle could seriously contemplate if they want to survive.