Bitter recriminations at the Bridge

Tom Henning Ovrebo is a psychologist by profession - and Chelsea's Didier Drogba provided an unpalatable close-up study in human behaviour for the Norwegian referee amid bitter recriminations at Stamford Bridge.

Chelsea appear eternally doomed in their quest to fill the largest empty space in their trophy room - a Champions League title. They can throw the game's largest cheque book at it, they can change players and they can change coaches, but they still cannot change their luck.

Claudio Ranieri's tinkering squandered a semi-final against Monaco in 2004. Luis Garcia's controversial "ghost goal" did for them against Liverpool in the last four a year later and John Terry's slip in a Moscow downpour resulted in him missing what could have been a winning penalty against Mancheser United in last year's final.

This season's hard luck story will centre on a burly and balding official whose failure to make the big calls correctly drove the high maintenance Drogba over any acceptable line of behaviour as Chelsea were denied another final appearance against United by Barcelona midfield man Andres Iniesta's decisive away goal in injury time.

Yes, Ovrebo had a shocker and proved wholly inadequate to take control of a game of this pace, passion and magnitude, but even his regular refusals of presentable penalty appeals must not excuse Drogba's disgraceful actions on the final whistle. 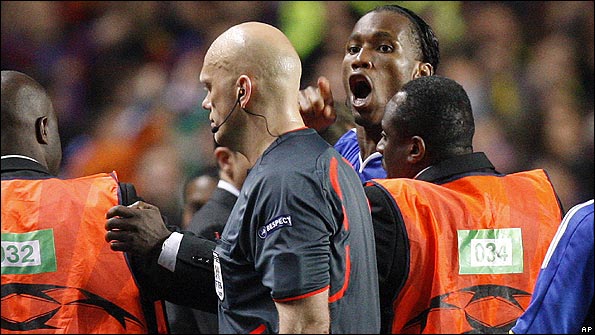 Chelsea had just cause to take issue with Ovrebo's decision-making.
Guus Hiddink's team can rightly feel hard done by in a tie they had won until Iniesta, like a desperate boxer taking one last swing, lashed a 20-yard finish high past Petr Cech with 90 seconds left.

It was a puncher's chance and Chelsea took the knockout blow.

Conspiracy theorists will claim an implausible sub-plot was that Uefa did not want another all-Premier League final and Ovrebo had somehow sub-consciously pleased his bosses by denying Chelsea at every turn, thus ensuring Barcelona gave the final a Catalan presence.

The key exhibits were his decision to place a first-half foul on Florent Malouda outside the area when it plainly took place inside and his waving away of two handball claims against Gerard Pique and Samuel Eto'o after the break. Various perceived fouls inside the area were also all met with firm rejections.

All this grassy knoll-style chatter is nonsense of course and Hiddink was careful in the extreme to ensure he did not bite, contenting himself with the not inconsiderable claim that this was the worst refereeing performance he had ever seen, an observation he was perfectly within his rights to make.

Ovrebo was plainly ill-suited to the task but it should also be remembered he harshly sent off Barcelona's Eric Abidal and Pep Guardiola's side actually cut it rather fine by leaving it so late to cancel out Michael Essien's magnificent bludgeon of a strike after nine minutes.

And whatever Ovrebo did, it did not give Drogba the right to march on to the pitch at the final whistle, clad in his Chelsea kit and flip-flops like some enraged holidaymaker, and subject the referee to an out-of-control verbal barrage accompanied by some fairly threatening body language.

Drogba, who was splendid until he went off injured late on, was still pursuing Ovrebo in wild-eyed fashion despite receiving a yellow card, shouting expletives into a television camera for good measure.

It was a desperate display from Drogba - a revisiting of the lack of self-discipline that saw him sent off at a pivotal moment in last season's final. The word inside Stamford Bridge after the game was that he may well face hefty Uefa punishment and he deserves every last bit of it.

Human nature being what it is, a disappointment on the scale Chelsea had just suffered in both timing and impact - coupled with a burning sense of injustice - means adrenalin will inevitably be pumping and raw emotions will be on the surface.

Imagine how John Terry felt at being robbed of a shot at redemption after that penalty miss? Imagine how Frank Lampard felt at failing to get the chance to win the major honour that still eludes him?

They will have hurt just as badly as Drogba, if not worse, but they did not charge at Ovrebo, or have to be held back by anyone who happened to be in the vicinity.

But when Hiddink insisted he understood Drogba's behaviour, it is to be hoped this is simply a case of a manager defending his player rather than condoning what we saw at the final whistle.

In truth, Stamford Bridge's technical areas were poorly policed all night. Guardiola was asked to move away from Hiddink's territory - Chelsea's boss even appeared to be buffeted when Iniesta scored - while Barcelona's space occasionally resembled Piccadilly Circus in Friday's rush hour.

And the saddest aspect of the Drogba debacle is that it took all the attention away from so much that was good from Chelsea, who deserved a place in the final.

Chelsea were outstanding. They may not have matched Barcelona's passing, but they were the more potent team, creating the better chances before the Catalans kicked them in the teeth with their only shot on target all night.

Lionel Messi was kept to the margins, Eto'o was totally anonymous and Chelsea keeper Cech was kept out of harm's way by a superbly-marshalled defence, in which Terry was immense.

Barcelona may have weaved their pretty patterns, but such was the solidity of Chelsea's strategy that they did it in areas that were never going to hurt until the most savage wound of all was inflicted in the dying seconds.

Lampard was inspirational in midfield while Drogba demonstrated the other side of the great enigma with another powerful display up front that proved a constant source of nuisance to Barcelona's revamped defence.

It was display that did Chelsea huge credit and one that should have been rewarded with a place in the final.

Barcelona were unimpressive, and their victory came at a price with both Dani Alves and Abidal, the latter unluckily, suspended from the final.

On the compelling evidence of a tumultuous evening, the more effective side is out and Manchester United manager Sir Alex Ferguson may just be a little happier to be facing Barcelona than Chelsea.

Chelsea were just moments away from the outstanding result their effort and guts deserved - instead they were left with the bitter after-taste of defeat and the potential consequences of another loss of control from Drogba.