Sir Alex Ferguson feared the side-effects of a trip on Barcelona's "carousel" - and he was doing his suffering in public after Manchester United were left sick and dizzy after the roughest of rides in Rome.

Barcelona's peerless midfield pair of Xavi and Andres Iniesta were the inspiration behind Ferguson's colourful christening of their passing style as he said: "I don't think they have ever given the ball away in their lives".

This extravagant claim appeared based in solid fact as Barcelona ruthlessly stripped Manchester United of their Champions League crown on the banks of the Tiber.

And as Ferguson grimly accepted the truth that Manchester United were dismantled by Barcelona, additional pain came from the knowledge that he knew what was coming and still his Premier League champions were ill-equipped, tactically and technically, to deal with it.

Ferguson's inner frustration surfaced with a needlessly aggressive response to a perfectly reasonable question about his hunger to fight back from this chastening night, but he made no excuses. It would have been folly to do so and he knew it.

Ferguson was critical of his players, labelling defending "shoddy" and admitting some big players would have been disappointed with their showings, but it was a rebuke delivered with an air of resignation as opposed to anger.

No shame in being outclassed by the best team in Europe - the problem for Ferguson was that it was Manchester United on the receiving end as opposed to inflicting it on their manager's behalf.

Picking over this defeat was hurting Ferguson. He was not used to it but on this occasion had to take his medicine. To fight United's corner in the face of such inferiority would have been futile. United were tactically bankrupt long before referee Massimo Busacca's whistle brought the punishment to a close. 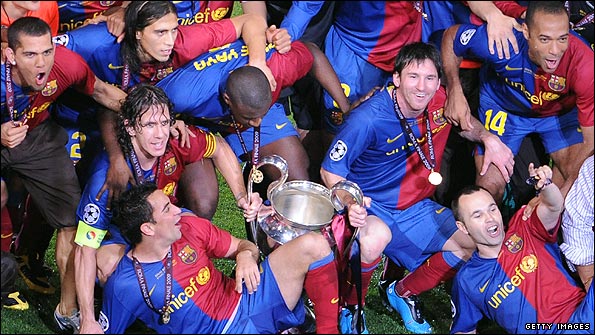 Even the defiant, sympathetic applause of Manchester United's fans, who did their best to lift their team in a very dark hour, had a surreal tinge. It was not meant to be like this.

Manchester United were ready to embrace history in the Stadio Olimpico as the first club to defend the Champions League, but by the time Ferguson trooped into his post-match inquest it had left town.

In contrast the youthful Pep Guardiola was applauded in by elated, and highly-partisan, Catalans after a debut season as a coach that has hauled in La Liga, the Spanish Cup and now the Champions League. Perhaps Pep should retire now at the age of 38 - the only way is down surely?

After an opening nine minutes that gave false hope to all with United at heart, Barcelona had the place to themselves. The torture session was started by Samuel Eto'o's opening goal after 10 minutes.

Those of us who felt Barcelona would lack the physical presence to combat United were rather pleased with ourselves until that point. Shots in from Cristiano Ronaldo. Barca a bag of nerves. Exactly as we thought.

Eto'o's goal, courtesy of another moment of Fernando Torres-style frailty from Nemanja Vidic when faced with a world-class striker and poor goalkeeping from Edwin van der Sar, finished United.

It was as if confidence had simply been passed from United to Barcelona like a baton. Ferguson's gameplan fell apart as Ryan Giggs did not so much play in the hole as plunge through it and the deployment of Wayne Rooney on the left almost constituted an act of negligence.

The crumbling of United's edifice, there was an alarming visible decline in performance, gave life to Guardiola's inspirational decision to play Lionel Messi in a central role as opposed to out wide. United could not fathom how to deal with him and the Argentine's brilliant header simply crowned a glorious night for football, if not Ferguson.

It also settled, for now, the argument about who is the world's best player. Messi bestrode this showpiece, putting Ronaldo in the shade. Ronaldo, however, demonstrated as much spirit as anyone in a white shirt last night.

He never stopped running and his petulant late spats with Carles Puyol were borne out of frustration. Messi had help in the shape of Xavi and Iniesta, Ronaldo was a man alone.

Ferguson's own approach will be questioned and there can be no doubt his tactics failed on this occasion.

He went with the energy of Anderson and Ji-Sung Park in midfield, and while it worked against Arsenal it did not stand a chance here. Ferguson praised Park's awareness of space before the game, insisting "he doesn't need the ball." Sadly for the South Korean, this was a night when he had no choice in the matter.

And Rooney's deployment on the left, while it has enjoyed success before, is less successful against a team that denies United decent possession for minutes on end, as Barcelona did here.

It reduced Rooney to a virtual non-presence in the game, stuck helplessly on the fringes. He was eventually moved into the centre, but by then the pattern was set, the game was gone. Barcelona were ticking over and United were not good enough to turn it around.

Rooney's best work is through the middle of the pitch and this is where he should be restored next season.

United's display and defeat must be placed in context. They have won the Premier League for a third successive season and reached a Champions League final for the second year in a row. One defeat does not constitute a crisis - but the sheer scale of Barcelona's superiority will have shocked Ferguson and his players.

This tournament holds a special place in United's history and Ferguson's heart. The hurt will be especially acute on this, the highest stage.

United will regroup, rebuild and call on their reserves of resilience - but Barcelona are the best team in Europe. And, on this compelling evidence, by some distance.