No excuses for Newcastle

Alan Shearer was hurting and - in his words - "feeling raw inside" as he struggled to cope with the pain of Newcastle United's fall out of the Premier League.

No-one in close proximity to Shearer as he sat in an unforgiving spotlight at Villa Park doubted him. It was written on his face and evident in every word of a clinical, brutally honest analysis of why Newcastle's sentence for years of mismanagement was a place in the Championship.

Shearer admitted his own eight-week mission to save Newcastle from relegation had failed "for a million reasons." Not necessarily a gross exaggeration given the dysfunctional antics at St James' Park this season.

One thing, however, was not up for discussion. No hard luck stories can be told by Newcastle - they deserved to be relegated and anyone not sure only had to spend 90 minutes in their company on Sunday.

Shearer's obvious hurt would have been compounded by a Newcastle display that was an insult to every principle and value he held dear during his playing career and to the supporters who travelled in hope to Birmingham.

He did not publicly call out his players because there was little mileage in that. Plenty of others will do it for him and most of them will be nowhere near Tyneside when next season starts anyway.

On a day when a point would have preserved Premier League status, Newcastle degenerated from a promising start into an all-consuming lethargy that made you question whether they were actually aware of the prize they were fighting for. 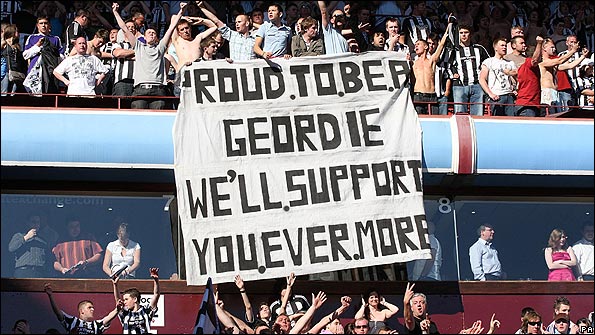 No fight. No urgency. No desire. No willingness to put limbs on the line to get the desired result. No wonder Shearer looked shattered in his post-match inquest. These were the basic starting points every time he pulled on a shirt.

Shearer was an impressive and dignified figure after the game. He took his share of responsibility while naming all the other guilty men in this fiasco - which is pretty much everyone involved with Newcastle in recent years.

He had no regrets about taking the job and revealed he even understood why so many found management addictive. Sadly for Shearer, like so many addictions there are bad side effects and in football management, relegation is one of them.

Could he have done more? Well, he failed to inspire Newcastle's players to make the final push to safety, but at Villa Park it was clear many of them were beyond inspiration.

Porous defence. Plodding midfield. Punchless attack. Put these things together and you can book your ticket to the Championship.

Newcastle were ponderous in all parts and no manager can give a player the pace required in the modern game. The only way Shearer could have seriously addressed Newcastle's problems was by buying new players and he came too late for that.

This is why owner Mike Ashley - we will come to him later - must make every effort to give Shearer the assurances he will demand when they meet this week to ensure he continues next season.

It was clear at the final whistle that Shearer's iconic status on Tyneside has not been seriously damaged by relegation as supporters, many in tears, chanted his name.

Where owner Ashley stands is another matter. Shearer will almost be testing the owner's commitment when he outlines the need for what he generously described as "an overhaul" at Newcastle in the summer.

Ashley has found it tough demonstrate a sure footballing touch despite ploughing an estimated £250m of his own money into Newcastle. The decisions he has made - or the people he has had making them for him - have proved flawed.

The appointment of Kevin Keegan was a populist move but it was doomed almost from the start by the presence of Dennis Wise. Keegan was well-known as a man who craves control and once it became clear he was never going to get it, the credits were rolling.

Joe Kinnear, who eventually succumbed to health problems, was plucked from obscurity to steer the giant club out of trouble. He is unlikely to return to Newcastle and the gamble of using Chris Hughton and Colin Calderwood, two sound footballing men but without Premier League management experience, as a holding operation failed.

Shearer had no experience but there was a method in his appointment. It was an attempt at a quick fix, and even though it has failed he is still Ashley's best bet because if he could not sell Newcastle in the Premier League, he will not sell them in the Championship.

Ashley and Newcastle may well be stuck with each other. Shearer is the glue that makes the partnership workable, offering the opportunity for a long-overdue spell of stability.

The former England striker can grow into the job in a tough proving ground, while Ashley knows supporters will give him the sort of time and patience they would have given to Keegan.

Shearer warned Ashley that big decisions needed to made quickly. He apologised for the emotive language, but you knew exactly where he was coming from when he said: "Every day that goes by another room's burned down."

Michael Owen, like so much of his career at Newcastle, came and went in the blink of an eye on Sunday. No service, no goals, no serious future at St James' Park.

He will be one of the big earners who will surely leave. Newcastle have a host of players on huge, Premier League wages and it could be quite a trick to get rid of some of them.

Alan Smith and Joey Barton will surely be surplus, but where are the takers? Smith's best days are behind him because of the ravages of injury and Barton's behaviour hardly makes him a hot property.

Veteran Mark Viduka may not see his future in second tier football while Obafemi Martins could also seek other options.

Newcastle have been the architects of their own downfall. The accident waiting to happen finally occurred at Villa Park and the Championship is a true reflection of the club's current status.

Shearer looked like a man who will hurt for some time to come - but the conversation he has with Ashley will be pivotal in shaping Newcastle's future.

If Ashley says the right things and persuades Shearer to stay on, Newcastle may yet salvage something from the wreckage of relegation.

To lose one Geordie icon in Keegan could be termed unluckly, to lose another in Shearer would be careless - and the Toon Army do not need that after one of the blackest days in their recent history.