Rafael Benitez's mood was so dark after this magnificent spectacle against Arsenal that mention of Sir Alex Ferguson and Sam Allardyce's co-ordinated character assassination on Liverpool's manager was treated as a moment of light relief.

Benitez said nothing but at least allowed a hint of a smile to play across his face - a brief respite from his agonised outpourings about the "massive mistakes" that may just have pulled the rug from under Liverpool's Premier League title challenge.

He had the best seat in the house for a glorious, free-flowing spectacle that saw remarkable personal feats in the shape of Andriy Arshavin's four goals for Arsenal and outstanding contributions for Liverpool from Fernando Torres and Yossi Benayoun.

And yet if you had been the brave man who informed Benitez he had just witnessed a classic - and Liverpool seem to be involved in them on a regular basis these days - he would have been in no mood to listen.

This is because the real winners in this meeting between Liverpool's big hitters and the ruthless counter punchers of Arsenal were actually Manchester United. 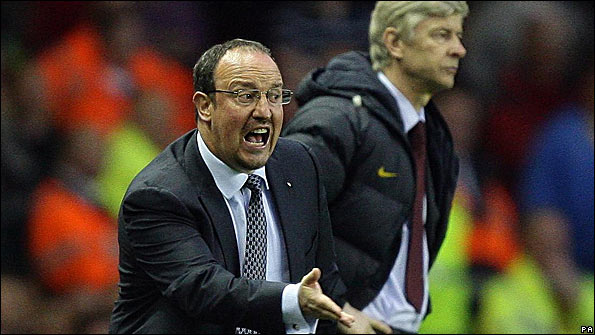 Liverpool co-owners Tom Hicks and George Gillett were in town and on the front row of Anfield's directors' box in a rare show of public unity, and what a treat they got.

At times the American duo looked bewildered at what was unfolding before them - but if they like the basketball that is so popular in their own country, then the end-to-end nature of this wonderful piece of entertainment would have been right up their street.

It is easy to condemn Benitez and his like as killjoys when they deliver the time-honoured "it was a great game for fans but not for managers" in the immediate aftermath of a game that could stand alongside any played in the Premier League this season.

What is there not to like about that? One glance at Benitez and you knew he was about to tell you.

Benitez had the appearance of a man who hated almost every last second of it - and if you looked hard enough you could see his point.

For Benitez, the consequences may be too great to look back on a point gained by bravery and spirit, but undermined by criminally careless defending, for him to regard this as a celebration of the finest English football has to offer.

This is because Benitez knows this was a missed opportunity - Liverpool have had Manchester United worried in recent weeks and it was starting to show.

What other explanation could there be for the faintly embarrassing accusation from Ferguson, supported by a relegation-threatened Allardyce who should have more to worry about, that one innocuous gesture by Benitez after a Liverpool goal against Blackburn effectively amounted to one of the worst insults one manager can inflict on another?

And now, because of individual errors and an unforgiveable lack of discipline, Liverpool have crucially released the pressure on United and Ferguson by a notch.

It was a strange experience to be inside Anfield on Tuesday. There was the usual noisy fervour and magnificently vocal backing, especially in urging Liverpool to come from behind three times, but there was also tangible tension and anxiety.

And this transmitted itself to Liverpool's players, with Fabio Aurelio so anxious to take a first-half free-kick (first half this remember) that he simply picked it up and hurriedly lashed it 60 yards and out for an Arsenal goal-kick. 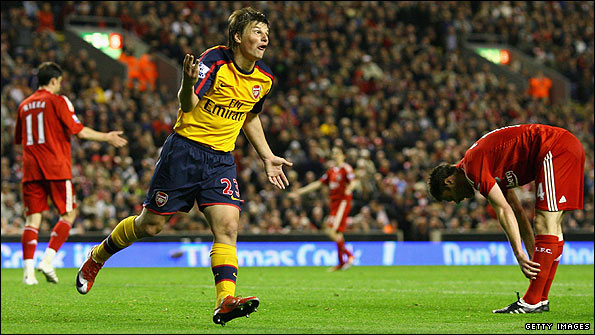 Individual defensive errors were committed everywhere by Liverpool. Javier Mascherano for the first, Alvaro Arbeloa for the second, Aurelio for the third and just about everyone for the fourth.

Liverpool have transformed themselves from the Premier League's great pragmatists into dazzling showmen since they wiped the floor with Real Madrid at Anfield on 10 March. They have scored four goals or more in six of their last eight games and 12 in their last three, even without injured Steven Gerrard.

The shackles have been released as the prospect of an unlikely hauling in of Manchester United suddenly came into view - and while this made for edge of the seat entertainment against Arsenal, they may just have allowed themselves to get too carried by the realisation that they could actually win the title.

Liverpool have made the transition to a potent attacking force with ease, but they are a work in progress when it comes to bolting it on to defensive reliability and this may prove their undoing, at least this season.

Amid Benitez's constant repetitions about the bad goals Liverpool gave away, he conceded the fourth goal was the one that hurt him most on just about every level.

Liverpool corner, Arsenal break, Theo Walcott pass, a "where's everybody gone?" look from keeper Pepe Reina and Arshavin's fourth goal. All done in the blink of an eye with virtually all of Benitez's team nowhere to be seen.

It was an offence to just about every Benitez mantra about tactical discipline, a dagger through the heart of his principles. And the fact that Liverpool were chasing the winning goal did not allow him to excuse it.

Arsene Wenger was rather more upbeat about affairs than Benitez. He could afford to be because any talk of Arsenal actually winning the title was the stuff of fantasy.

But make no mistake, Arsenal could yet prove a wild card in this compelling title race with a visit to Old Trafford to come on 16 May. Liverpool's problem is that it may come too late to have a significant effect on the destiny of the Premier League.

Wenger deserves huge credit for Arsenal's approach. They did not step aside with their sights on the Champions League, and Wenger was at pains to assure anyone with Liverpool's interests at heart in his post-match briefing that their commitment will be just as total when they travel to Old Trafford.

He has captured a special talent in Arshavin. Tiny with a rolling gait that disguises a wonderful turn of speed and a full range of tricks, he lurked on the margins before striking to deadly effect, almost begging the ironic question: "Yes, but apart from scoring four goals, what did he actually do?"

It was a stunning display of efficient finishing and bodes well for Arsenal's future.

So many parts of Liverpool's play also bode well for the future, but Benitez's body language betrayed the feeling that games may now just run out on them.

For the neutral it was a wonderful evening, played out against the heart-warming backdrop of a tribute to Liverpool legend, and a member of Arsenal's 1971 double-winning side, Ray Kennedy.

Mosaics at both ends of Anfield paid homage to Kennedy, who suffers from Parkinson's disease, to raise awareness of Liverpool fan Karl Coppack's Ray of Hope appeal, which has collected over £40,000 to fund essential equipment and services for the man still known as "Razor" at Anfield.

He made an emotional and wonderfully-received appearance at half-time, and if there was one thing that united both neutrals as well as those involved with Liverpool and Arsenal, it was that this was a fitting game worthy of his presence at the ground he graced so often.