Arsene Wenger is not renowned for his ability to smile through the pain of defeat - especially not against Manchester United and definitely not in a Champions League semi-final.

And yet here he was in Old Trafford's media suite, not exactly wise-cracking but certainly jaunty, exuding optimism from every pore, despite seeing Arsenal taken to the cleaners in everything but scoreline by Manchester United.

Arsenal's fans recite a mantra to Wenger as a sign of their cast-iron faith in his wisdom and ability. "Arsene Knows" is how it goes.

And he certainly seemed to know something the rest of us had missed as he dissected a semi-final first leg in which Arsenal were outclassed for long periods, then confidently forecast a victorious outcome after next Tuesday's return at the Emirates.

Wenger was stating the most unconvincing of cases, based on the evidence available at Old Trafford, with utter conviction - even openly inviting one non-believer to what he clearly expects to be a triumphant post-match press conference after the second leg.

And while some of Wenger's logic was hardly backed by a lengthy list of sound arguments - "football is like that" is not one of his more professorial pieces of reasoning - it was easy to see why Arsenal's manager was in unusually buoyant mood.

It was relief that Manchester United had somehow failed to transform total supremacy into nothing more than a single-goal lead given to them by John O'Shea at the height of a stunning opening barrage on the Arsenal goal. 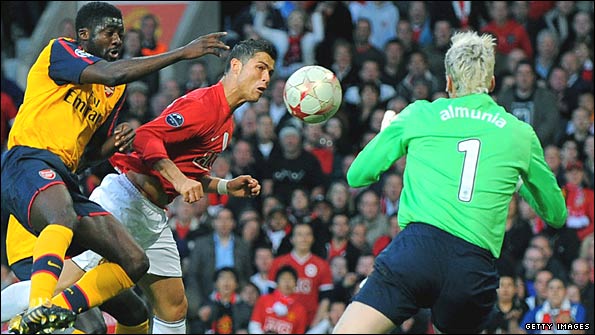 Sir Alex Ferguson's side produced football from the heavens in the opening 45 minutes, and yet a lack of killer instinct that has surfaced this season means that while the lead they take to London is satisfactory, it is in no way decisive.

True they crucially prevented Arsenal getting an away goal, but Ferguson's slightly agitated, albeit satisfied, demeanour betrayed his own belief that this particular semi-final should already be done and dusted.

Wenger said: "I am convinced you will see a different Arsenal team next week."

They will need to be because if this Arsenal team turns up and performs like they did at Old Trafford, one thing Arsene will know with absolute stone-cold certainty is that his dream of winning the Champions League will have disappeared for another year.

Only Arsenal keeper Manuel Almunia stood between Arsenal and total wipe-out in the first half, saving brilliantly from Wayne Rooney, Carlos Tevez and Cristiano Ronaldo - who also struck the bar in the second half.

And yet Wenger will feel a 1-0 defeat is a fair exchange in return for the obvious gulf between the two sides at Old Trafford.

United's narrow victory margin leaves the door ajar for Arsenal, with Wenger hoping the inspiration of the Emirates and the undoubted natural gifts contained in his side will push it wide open and set up a Champions League final in Rome.

It was not just Arsenal's under-performing players who got away with it on a thunderous Old Trafford night when Manchester United's fans gave the lie to the oft-stated criticism that they sit and admire rather than back their team with noise.

Wenger himself had a lucky escape because he appeared to make rare tactical misjudgements in crucial areas. The deployment of Samir Nasri in a defensive midfield role was doomed to failure from the start, while Cesc Fabregas was neither here nor there in what appeared to be a supporting role to the jaded Emmanuel Adebayor.

Ferguson, in contrast, got it spot on. He went for energy and industry all over the pitch to complement the world-class talents of Rooney and Ronaldo. They worked superbly in tandem with Tevez in what was effectively a return to the format that helped to win the Premier League and Champions League last season.

Anderson and Darren Fletcher were outstanding in midfield. The recent heavy-legged look had gone from United as they played at the high-tempo that suits them best.

Of course, Wenger has every right to have faith in the ability of players such as that talented trio - and Theo Walcott will surely improve on an anonymous display that saw him removed in the second half.

He will also hope Robin van Persie recovers from injury to provide the rapier thrusts missing because of Andrey Arshavin's ineligibility.

And most of all, Wenger will cling to the belief that United had their chances here and missed them. United and their fans may have departed Old Trafford in celebratory mood - but at the back of their mind will be that nagging doubt that it should have been more than just the one goal.

Arsenal will take heart from that, but for all Wenger's bold talk, it will take a vast rise in the standard of their performance if they are to pull off the recovery job their manager believes they can.

United were superior in every department and the smart money will be on them getting a goal at the Emirates that will leave Arsenal needing three. It is a long way back from there.

But if Arsene genuinely knows, and he gave every indication of appearing to as he talked up his team's chances of over-turning United's lead, then Arsenal's fans may need to invent new superlatives for their spiritual leader.