Guus Hiddink revealed Chelsea could smell victory in the air as they geared up to all but extinguish Liverpool's Champions League hopes - a far cry from the odour that surrounded them on their last Anfield visit.

Hiddink said: "If a team feels that an opponent can be hurt in some parts it would be stupid not to go for that. The team knows that and if a team smells that it is good. It is good that the Chelsea team had that smell here."

Chelsea followed the scent and it led them to the brink of a place in the last four of the Champions League with a swagger that was a stunning example of the restorative powers of one of the world's master coaches.

When Chelsea played at Anfield on a freezing Sunday in February with a cold snap about to bite, the only stench detected was that given off by a decaying team under the stewardship of a coach who would be sacked eight days later.

If Liverpool's 2-0 win then effectively sealed Luiz Felipe Scolari's Stamford Bridge fate, the manner of Chelsea's performance and approach here will only increase the desire to turn Hiddink's temporary tenure into a permanent residency. 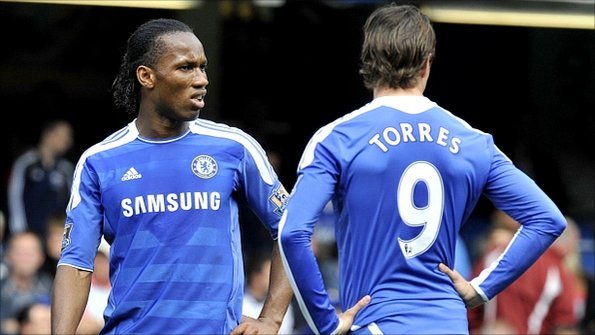 Chelsea were unrecognisable from the side that lost so tamely at Liverpool only two months ago. Back then they looked like a team ready to go quietly over the hill together, ageing, uninspired and lacking motivation and direction.

Didier Drogba offered up a cameo appearance as a substitute that just stopped short of shameful while Michael Ballack glided ineffectually, the old sting gone from his game.

Cut to Anfield on a warm April night and the spring was literally back in Chelsea's step - re-ignited by a coach who comprehensively outmanouevred his opposite number Rafael Benitez, rightly regarded as one of the Champions League's supreme strategists.

Hiddink is known in his native Netherlands, a little mystifyingly, as "Lucky Guus". If he has had one huge slice of good fortune since arriving at Chelsea, it is that his appointment co-incided with the return to fitness of Michael Essien.

Essien held the key to the tactical approach devised by Hiddink to underpin his stated intention to attack Liverpool at Anfield - a ploy threatened by many but actually employed by few, usually only the supremely confident or the foolishly misguided.

Hiddink detailed Essien to shackle Steven Gerrard, and in doing so cut the cord between Liverpool's captain and Fernando Torres. The Ghanaian delivered and the Dutchman's master plan fell into place perfectly.

He said: "It is not so difficult to know where the weapons and arms are in Liverpool. It is Torres and Gerrard and the triangle with Dirk Kuyt and the right-back Alvaro Arbeloa. This is what you have to disarm and Essien was key in this."

Liverpool's struck first through Torres after only five minutes, but Chelsea treated the setback as a mere glancing blow and when I asked Hiddink about his side's display, the response to going behind filled him with pleasure.

"I have to compliment the team on the way they reacted to this setback. We knew we could score, so there was confidence in the team even at 1-0 and we proved that," he said.

Liverpool played a full part in what was a classic slug-out for an hour until Chelsea simply proved too good for them - helped by some amateurish defending.

Zonal defence is one of the great enigmas of the modern game - why not mark footballers? - and Liverpool employ it with very mixed results. It cost them dearly as the unlikely figure of Branislav Ivanovic headed in two corners either side of the interval.

Hiddink dissected the system with a surgeon's precision as he explained: "Liverpool have zonal defence and they have no marking. We have players who are tall, time everything well and who are brave. We talked about that and how we could get some benefits."

Makes it sound easy doesn't he? The secret is in the simplicity. As former Chelsea star Pat Nevin told me last week: "Hiddink gets good players doing what they are good at."

All Chelsea's players took up the right positions, Liverpool were tested by triangles of passing. It was almost as if Chelsea have been reborn under Hiddink - even the most hardened Liverpool fan would accept they were a revelation.

And this is why we saw Drogba back to his rampaging best, albeit producing some wayward finishing before he scored Chelsea's third, Ballack striding through midfield after an uncertain start and even the under-achiever Florent Malouda actually demonstrating why Liverpool boss Benitez was furious to miss out on him.

Chelsea have had a chequered Champions League history at Anfield - but even the great Jose Mourinho never quite mustered the nerve to take the fight to Liverpool in the manner of Hiddink. 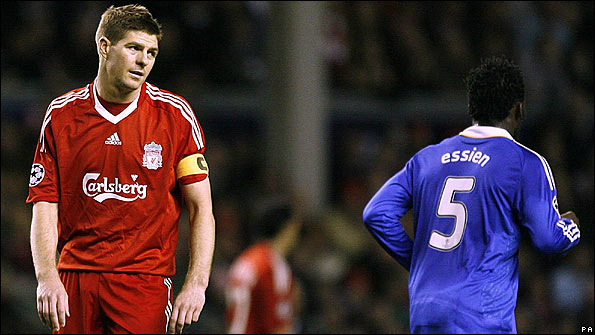 Benitez cut a desperately subdued figure on one of those rare nights when his Champions League game plan failed him - he could not, and did not, muster any sort of argument against Chelsea's superiority and eventual victory.

And he seemed almost resigned when I questioned him about the marking at set-pieces that so undermined Liverpool.

He said: "It is difficult to stop them. They have five or six players who are really strong in the air, but it was a free header for the first goal so that was a mistake."

It was a chastening night for a Liverpool side who looked to be on an unstoppable roll after taking Real Madrid, Manchester United and Aston Villa to the cleaners - but they can have no complaints.

With Gerrard and Torres nullified after an explosive start, Liverpool's undercard such as Kuyt and Albert Riera fell short of the quality required to trouble Chelsea while Martin Sktrel looked as vulnerable as he did for Slovakia against England at Wembley.

Images of Istanbul will no doubt be invoked by Liverpool to demonstrate how they can pull this tie around, but all logic suggests the game is up in the Champions League.

And we should not be too harsh on them. Liverpool have been magnificent in Europe in recent seasons and there is no shame in losing to Chelsea in this mood.

Maybe Chelsea's regular visits to Anfield in the Champions League have also crucially anaesthesised them to the unique atmosphere in front of The Kop, which just seemed to lack a little of its cutting edge last night.

Hiddink warns Liverpool have proved they can do the "unthinkable" and he does not do complacency - so all smart money would be on Chelsea now.

If Chelsea do go through they are almost certain (well ok certain) to face another old foe in Barcelona, arguably the most unenviable task in the tournament these days.

Tough times ahead then if it is to be Barca - but Hiddink and Chelsea demonstrated at Anfield that they can enter the toughest arenas and, backed with a sound game plan and players rejuvenated, emerge victorious.