Capello allows his mask to slip

Fabio Capello's iron mask slipped for just a moment in a rare public display of emotion that emphasised the importance of England's scrambled victory against Ukraine.

A defiant double-pump of the fists followed by a sharp burst of applause at Wembley's final whistle, it revealed a hitherto hidden side to the normally stone-faced Italian who is guiding England expertly towards next summer's World Cup.

John Terry's bundled winner five minutes from time was not a thing of beauty. England's performance was not easy on the eye either - but maximum points at the halfway point of the qualifying campaign carries greater weight than marks for artistic merit.

Capello's open show of delight was so out of character it drew a question at his post-match debriefing and was explained thus: "It was because I understand the players and I understand the moment, When the referee whistled time I was very happy."

And why not? The reality - although both Capello and England's players are wise enough to resist say it - is that it will take a collapse of epic proportions to stop them reaching South Africa after this latest win.

England have done the donkey work in the group and their next two fixtures against Kazakhstan and Andorra represent as close to a guarantee of maximum points as it gets.

Capello will soon be reaching the stage where checks will need to be put in place against the traditional rash of over-expectation, and this laboured performance against an unremarkable Ukraine side may help to do just that.

England will surely qualify on cruise control barring a catastrophe, the sort Capello's pragmatism will guard against, but they are still a work in progress when set against the majesty of Euro 2008 champions Spain - who they may have to overcome in South Africa.

They will get to South Africa. What they will do when they get there is still a matter for debate.

England were pedestrian, lacking pace and urgency, for long periods at Wembley. Too careless in possession and too generous at the back, effectively gifting a goal to Andriy Shevchenko that almost wrecked their flawless record in Group Six.

But it is also a tribute to the resilience injected into England by Capello that they dug out a vital victory from the mediocrity of much of this display - a sign that the team is starting to mirror the winning mentality of their coach.

England have come a long way since the night Steve McClaren stood under his infamous brolly and watched a nation's Euro 2008 hopes come crashing down on his head against Croatia, and the way Capello's players roused themselves from the shock of Ukraine drawing level to run out winners proved it.

Capello was satisfied in victory, playing the percentage game to brush off a rather partisan, not to mention ungenerous, assertion from a visiting Ukranian journalist that "you win because you are lucky." 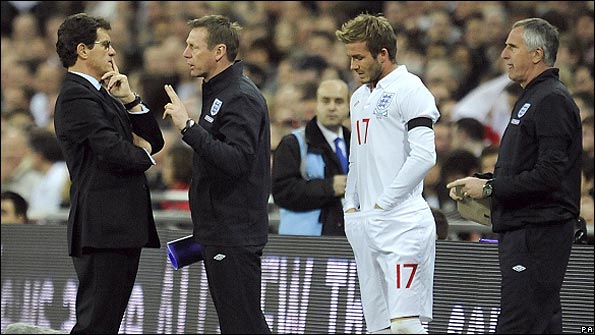 England were not lucky. They were not impressive either - so where do they stand midway through a qualifying campaign that is surely already destined to end in South Africa?

It is tough to pick holes in a team with a maximum 15 points on the board - but there are areas of concern to address.

Goalkeeper David James will be almost 40 by the time the World Cup's opening ceremony takes place. He is no closer to inspiring total confidence now than he has been at any time during his career and yet he remains unchallenged as first choice.

He made two crucial saves in the friendly against Slovakia, but his save from Anatoliy Tymoschuk was, at best, unorthodox although he will rightly say it got the job done.

James must be put under greater pressure for his place and it is to be hoped Ben Foster and Joe Hart can find regular football somewhere - or West Ham's Robert Green is finally put to the test once and for all.

Ashley Cole is suffering a serious crisis of confidence, one Capello will hope is temporary. He was poor in possession against Ukraine and looks a shadow of the player who has made the left-back position his own for so long.

Cole's place can no longer be taken for granted, so what price Manchester City's Wayne Bridge or Everton's improving Leighton Baines getting their chance?

Capello's central defence is well-catered for in the shape of Terry and Rio Ferdinand, although it is easy to see why Ledley King is so coveted by England's coach. He would add another dimension - but can he be a serious option for the short, intense combat that comes with a World Cup?

England's midfield did not work as slickly as it did against Slovakia - but has shown enough promise to suggest Capello's revamped formula has the makings of a success.

Liverpool captain Steven Gerrard will never have the side built around him, so he is likely to stay in his current position on the left side with licence to wander - leaving the key central areas to Frank Lampard and either Gareth Barry or Michael Carrick.

One task that is sadly beyond Capello is combining the pace of Aaron Lennon with the product of David Beckham. The dilemma was on public view at Wembley, where Lennon's pace was in evidence as usual, but it needed the delivery of Beckham to help create the winning goal.

Beckham's role is now identified as an impact substitute, so Capello will be hoping Arsenal's Theo Walcott can avoid further accidents and fulfil the golden promise he has shown when the World Cup comes around.

And then there is Wayne Rooney. Indefatigable, inspirational and occasionally on the edge, as seen by his wild challenge on Oleksandr Aliiev which was not quite as "normal...perfect" as Capello described in the after-match exchanges.

Ukraine coach Oleksiy Mykhaylychenko provoked wry smiles with a Wengeresque "I didn't see it" but Rooney was sailing close to the wind and many officials may not have taken referee Claus Bo Larsen's lenient view.

England simply cannot afford to be without Rooney if they are to have any chance of winning the World Cup - his efforts against Slovakia and Ukraine only underline this fact.

Capello's meticulous approach means these crucial details about his developing team will not have escaped his attention, but the simple fact he can address them with maximum points secured in England's World Cup group will only add to his satisfaction.