Ferguson simply regards this as Manchester United's way - and may explain the Scot's calm demeanour in front of Europe's media as he dissected a desperate night against Porto that leaves them clinging to the Champions League crown by their fingernails.

The 1999 Champions League final win against Bayern Munich is Ferguson's prime exhibit, but United may have to become the first English side to win in Porto's intimidating Estadio do Dragao if they are dig themselves out of their latest deep hole.

Porto coach Jesualdo Ferreira's poker face never flickered as he revealed a secret behind the 2-2 scoreline that leaves United in danger when he said: "We never forgot we were playing against the World and European champions."

Some feat this - and easier said than done on a night when United never remotely resembled champions of the world, Europe or anywhere else for that matter. 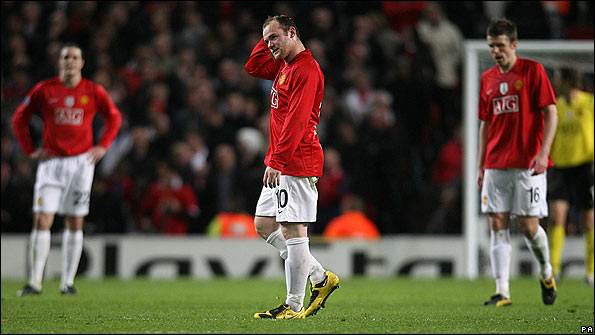 Ferguson's public verdict on United's display was measured, critical, realistic and yet optimistic about their chances of reaching the last four - but surely he was boiling inside after a display that did not just raise concerns about their Champions League ambitions.

It is a fool's errand to go around writing United off. History is littered with those daft enough to make that particular mistake and it would be no surprise if they went to Porto and came away with the result they needed to keep on course to claim an historic haul of five trophies.

But the mood of anxiety that pervaded Old Trafford almost from the first whistle betrayed growing worries that United night just be running on fumes as the season enters its crucial phase.

Ferguson accepted United looked tired. At times they looked worse than tired - whether this is down to playing just 48 hours after an emotionally draining win against Aston Villa or presents a more long-term problem remains to be seen.

The victory against Villa, in which the hype over Federico Macheda's late winner actually covered up the reality that United were not convincing then either, was meant to galvanise them, inject fresh impetus.

Not a bit of it. United were leg-weary, careless and eye-wateringly poor at the back - a far cry from the defensive history men of not so long ago.

Seasoned United watchers at Old Trafford made constant reference to the jaded body language. Is it just the quick turnaround in games from Sunday or is the season catching up with them? We will know the answer soon enough.

Mariano's late leveller was no more than Porto merited after Carlos Tevez threatened to steal a win for United. United were only allowed back into the game after Cristian Rodriguez's early strike because Bruno Alves gifted Wayne Rooney a goal.

Rooney's effort and endeavour shone like a beacon on a night when Old Trafford was strangely subdued, even before kick-off, and the crowd was rarely lifted by events on the field.

United's defence, which does not seem to have recovered from the wounds inflicted by Liverpool in the 4-1 defeat at Old Trafford, extended an open invitation to Porto's incisive attackers from,the start.

Rio Ferdinand was once more a spectator, and United's chances of progress in Porto will be hugely enhanced if he returns, although it is highly unlikely he will play at Sunderland at the weekend.

This is no criticism of Jonny Evans, but Nemanja Vidic is a more formidable presence with Ferdinand's pace and anticipation alongside him.

United's midfield lacked drive and Paul Scholes needs to produce more of those outstanding performances from the past just to prove time is not threatening to catch up with him. He rarely influenced events.

And then we come to Cristiano Ronaldo. A glorious talent, but a glorious talent who needs to take a long, hard look at team-mate Rooney's determination to chase every ball and pursue every lost cause.

Too often, when Ronaldo loses possession, he almost acts as if it is beneath him to go and retrieve the situation, preferring instead to stand around and wait for a team-mate to do his dirty work.

He performed the trick against Aston Villa on Sunday and was at it again in the build up to Porto's opening goal last night. It was significant that Old Trafford warmed to Rooney's non-stop endeavour while Ronaldo's occasional shrugs after losing possession were met with audible impatience.

United's fans expect to see perspiration running alongside inspiration. And rightly so. They are used to it from men such as Rooney, Scholes and Ryan Giggs, so Ronaldo need not feel exempt.

It was a bad night at the office for the Champions League holders - rounded off by the tannoy incongruously blaring out U2's "Beautiful Day" as Porto's triumphant players cavorted in an Old Trafford deserted apart from elated Portuguese.

Beautiful day? Not today thanks. Not if you were a Manchester United supporter anyway.

But for all the shortcomings of United's display, Ferguson exuded the air of a man who had seen it all before and still had huge confidence the task could be successfully completed.

He said: "We have been good at being first at everything at this club so this is another occasion when we can be first again by winning in Porto."

And, given that history of great escapes and accomplishments, who would write Manchester United off with any degree of certainty, despite their first leg struggles?

If he can get those heavy legs light again by the time United travel to Sunderland on Saturday, a season that has started to stutter can regain momentum once more.