Sir Alex Ferguson bristled and unleashed his best "turn to stone" glare at the mere hint that history might be about to wrap Manchester United in its warm embrace once more.

Ferguson was on familiar territory after United claimed the Carling Cup against unfortunate Spurs at Wembley after a final that was intriguing without ever fulfilling its early promise.

The question was justified, the answer a perfect example of expectation management from a man who has mastered the art in a silver-lined Old Trafford career.

United have added the Carling Cup to the Club World Cup, have strengthened their grip on the Premier League even after a day off from that particular domestic combat, are in the last eight of the FA Cup and nicely placed to reach the Champions League quarter-final.

So, Ferguson was asked, can United successfully complete the biggest clean sweep of them all?

"It's a media thing" was Ferguson's dismissive, instant response. Far be it from me to disagree with the great man but it is not "a media thing"- it is a genuine, realistic possibility. 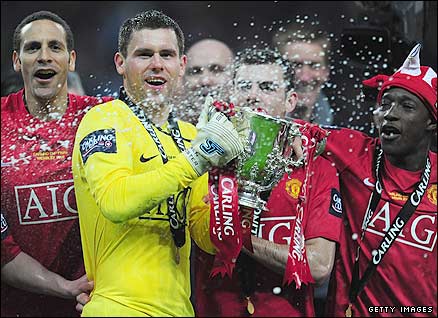 Ferguson rightly stated the quintuple - a new word even in United's lexicon of success - could come tumbling down in one moment of ill-fortune, but this victory once again demonstrated that, as with all great sides, they find ways to win even when their best deserts them.

And when the Scot studies his ledger after the Wembley celebrations have subsided, he will be in credit nearly all the way.

United have more silverware, have watched Liverpool's loss at Middlesbrough leave the Merseysiders running third in what even Ferguson thought was a two-horse race - and have uncovered compelling evidence that in Ben Foster their goalkeeping future is literally in safe hands.

Foster's career has stuttered through no fault of his own, but under the gaze of England coach Fabio Capello he looked like the goalkeeper so many have heard so much about for so long.

If the Italian is caused any sleepless night by his job, one of the contributing factors might be that he does not have, as yet, a keeper he can count on. If Foster stays fit and gets enough games he could be Capello's man in South Africa next year.

One ill-judged early piece of poor positioning apart, Foster was commanding, handled well and produced a magnificent save from Aaron Lennon with 20 minutes left to keep United level.

He made a crucial block with his legs to save from Darren Bent as Spurs pushed for a winner, and showed a natural presence and authority that fully justified Ferguson's faith in selecting him.

Foster then saved Jamie O'Hara's opening penalty to put the skids under Spurs' hopes of repeating last year's win in this competition.

Ferguson was in no doubt: "The future's his - the present belongs to Edwin van der Sar. I think Ben Foster will be England's goalkeeper for the next number of years."

Spurs boss Harry Redknapp was understandably satisfied with his side's efforts, matching United - and more besides in spells - and they at least deserved to take the game to penalties.

Ledley King and Michael Dawson were outstanding in defence, Luka Modric is a creator in the best Spurs tradition and if Redknapp can somehow get Lennon to combine his electrifying approach play with end product then he will be doing himself and England a favour.

But Spurs lacked class and clout up front, with Roman Pavlyuchenko producing a performance designed to push him to the front of the summer clear-out queue and Bent just not having enough in his armoury to trouble United.

There was enough from Spurs, however, to suggest that when Robbie Keane, Jermain Defoe and Wilson Palacios play regularly and Redknapp does business in the summer, there will be solid foundations in place to make serious progress.

There was an inevitability about United's victory once the shoot-out got under way - keeping Ferguson and his team on course to make this the most decorated season of all.

And, despite the defensive straight bat brandished by Ferguson in the bowels of Wembley after adding another trophy to his honours list, there is that genuine possibility that United can be successful to the power of five this season.

It would take a rare act of generosity on United's part to relinquish their Premier League crown now and stop them making it three trophies this season. It seems an age away (10 January to be precise) when Rafael Benitez reacted to a goalless draw at Stoke City by suggesting United might be "a little bit scared" to see Liverpool top of the table.

United's quest for more cup glory could provide their most difficult assignments, with the shadow of Jose Mourinho looming over the second leg of their last 16 clash in the Champions League with Inter Milan.

A goalless draw in Milan still leaves the tie in the balance, while an FA Cup trip to Roy Hodgson's Fulham in the FA Cup is a serious test.

But the strength of United's squad was underscored by the fact that this latest success was achieved with keeper Van der Sar rested, Dimitar Berbatov nowhere to be seen against his former club, Wayne Rooney sidelined by a virus and Michael Carrick also taken out of the firing line.

Nemanja Vidic and Ryan Giggs started on the bench as a further illustration that United have the quality and depth to take this tilt at history between now and May.

It is a mighty task and Ferguson is using wisdom gained through many successes to dampen down anticipation of a season that could eclipse even the perfect treble triumph of 1999.

But when it comes to silverware, Ferguson is always in it to win it - and while he may not trumpet United's hopes of claiming the big five, he will surely accept in his private moments that there is no reason why they cannot make this their greatest campaign.