If Rafael Benitez believes respect is in short supply for his European record with Liverpool, the Champions League demolition of the Real Madrid's fallen Galacticos provides him with more than enough to fill the gap.

Benitez's claim is a red herring because he is always afforded huge credit for his expertise in Europe. It is simply countered by puzzlement at his difficulty in mastering the subtleties and peaks and troughs of a long Premier League campaign.

Liverpool's advance into the last eight of Champions League provided further compelling proof that Benitez has few peers as a strategist on this stage.

And if Benitez wanted to deliver specific evidence that he is worthy of the greatest respect for his achievements in this tournament, then Liverpool's stunning display at a typically raucous Anfield can be produced as Exhibit A.

Benitez outwitted Juande Ramos - who must be elated every time his plane leaves the tarmac in England after his harrowing time at Spurs - and gave the lie to his hometown critics in Madrid who still damn him for a perceived failure to produce attacking football.

He may not do it with as much regularity as Anfield would like, but he did it here and it was enthralling viewing from first to last.

The Champions League is his playground. This is the arena he knows best - but he will also know that unqualified respect will come with a Premier League triumph to place alongside his European success.

Even Benitez must wonder, in his more contemplative moments, how a team that has looked so timid so often at Anfield this season can throw off the shackles and play with such verve, freedom and expression as they did here.

It was a display that showed the best of Benitez - and yet in some ways also drove at the heart of the Benitez enigma. 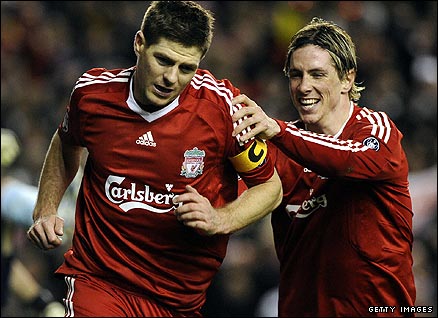 And central to it all, as well as a successful strategy from Benitez, was the partnership of Fernando Torres and Steven Gerrard.

These two world-class stars had Liverpool fans streaming out of Anfield harbouring hopes of a third win in this competition in Rome - and possibly a sixth crown - to go with successes there in 1977 and 1984.

Torres, likened to "a silver bullet in football boots" by one seasoned observer, was irresistible. The one-time icon of Atletico Madrid tortured the old enemy. The great Italian defender Fabio Cannavaro aged before our very eyes and poor old Pepe was a broken man inside half an hour.

Benitez was in low-key mood in his post-match inquest, respectful to a club he is constantly linked with and reluctant to lavish too much praise on Torres.

He took the refusal to single out individuals to great lengths, adding: "The kit man, doctors and physios were very good." Unusually in these instances, the tea lady did not merit a mention.

Ramos and Real were clearly suckered into believing Liverpool would lie back on the ropes and hold on to what they had, namely a 1-0 lead from a tight first leg in the Bernabeu.

Imagine their surprise then when Liverpool, in footballing terms, flew out of the corner and banged them right on the chin. Real reeled and never recovered from Liverpool's opening salvo.

Real complained, with some justification, about the legality of Liverpool's opening two goals when Torres appeared to foul Pepe and Gabriel Heinze's handball was questionable.

But to dwell on these matters and suggest they influenced the overall outcome would be straw-clutching by Real and doing a disservice to Liverpool, whose margin of victory was only kept in relatively manageable proportions by the brilliance of goalkeeper Iker Casillas.

Real, Casillas apart, were an embarrassing shambles of a team. If past speculation is true and Manchester United's Cristiano Ronaldo has a dream to play for them, he really must think again.

What useful purpose could it possibly serve his football (I stress the word football) career to join a team as poor as this and a club as unstable as this? On current evidence United are light years ahead of Real.

Sir Alex Ferguson, at the height of last summer's speculation about Real and Ronaldo, referred to them as "that mob". To call them "a mob" at Anfield would be to lavish glowing praise on them - not to mention deliver a very harsh verdict on a mob.

Liverpool won by four - but you could double the tally and it would offer up a more realistic measure of their supremacy.

If Benitez was cool in victory, Anfield was in ferment as the frustrations of so many Premier League games were blown away along with Real.

Liverpool are in the last eight and their excellence in Europe this season begs a simple question.

Can they win the Champions League?

On this viewing, albeit against a Real side that offered up a grim betrayal of their club's great traditions and almost wore the white shirts as flags of surrender, yes Liverpool can.

Benitez has the competition off to a fine art. He can organise containment and Liverpool's performance against Real showed they can adapt and attack.

In Torres and Gerrard they have the match-winners the Champions League requires. Benitez and Ramos both talked about "small details" changing matches - they can provide those defining moments.

Liverpool, in my opinion, will continue to miss out on the Premier League and Benitez's approach is part of that problem, but in Europe they are the team no-one wants to draw.

Benitez and Liverpool can be enigmatic and infuriating when it comes to claiming that elusive title, but put them on the European stage and both team and manager find a natural home.

Do not bet against them.