Scolari fails to step out of Jose's shadow

If anyone ever doubted that Roman Abramovich still takes more than a passing interest in the affairs of Chelsea Football Club, then the brutal sacking of Luiz Felipe Scolari on Monday provides the most compelling evidence to the contrary.

The sudden dismissal of Scolari just seven months after he was paraded in a barrage of flashbulbs and a blizzard of optimism in a plush Cobham hotel in Surrey has all the hallmarks of Abramovich's refusal to settle for second best.

Chelsea's hierarchy smiled in satisfaction back on that sunny July day when "Big Phil" charmed allcomers with his sense of humour and clever command of the English language. 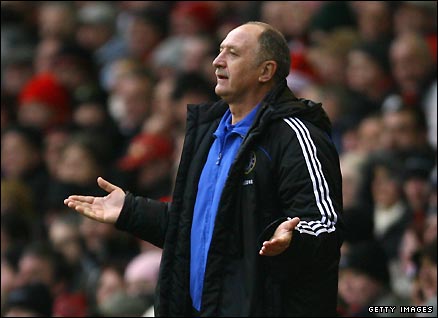 Abramovich was absent - but his fingerprints were all over the appointment of the man he wanted to bring the Samba touch to sterile Stamford Bridge.

It all seems an age away now as the coach who won the World Cup with Brazil in 2002, and looked like he would win everything in sight in the opening weeks of the season, is sacked with a ruthlessness that might shock even seasoned Chelsea observers.

As Scolari walked in for his coronation in Cobham - arriving between an advert for a Tom Jones impersonator and a "Legends Of Swing" tribute night - he was asked a question so loaded it almost groaned under its own weight.

"Are you a Special One?"

In other words, are you big enough and good enough to banish the ghost of Jose Mourinho haunting Stamford Bridge?

"So so" came the answer from The Modest One - and ultimately his failure to make Chelsea's fans and players forget the hugely successful Mourinho reign may have played a part in his eventual downfall.

The glorious opening to the season was punctured spectacularly when Liverpool ended an unbeaten home league run stretching back 86 games in October. It was as if a magic spell had disappeared with something as simple as Xabi Alonso's deflected shot.

Chelsea's iron-clad self-belief was gone. The aura of invincibility that gave Chelsea a huge psychological hold on opponents disappeared with it - Scolari needed to fashion a new start and failed.

But the decision to end Scolari's reign effectively in its infancy still comes as a surprise, even to those of us who have observed a succession of lifeless Chelsea displays in recent weeks.

It is also an ominous signal that the clock ticks for coaches at the game's sharp end at an almost preposterous rate once results start to slide.

I watched Chelsea's home defeat to Arsenal and defeats at Manchester United and Liverpool. No shame there - but it was the manner that came as a shock to the system.

Chelsea were lifeless and had a chronic lack of ideas and invention. Manchester United outclassed them, and while Frank Lampard's unjust dismissal gave Scolari a straw to clutch at in the defeat at Anfield, Liverpool were still too superior for comfort.

It may have been a single banner and a few jeers in the goalless home draw against Hull City on Saturday, but once the tide of fans' opinion turns it is almost impossible to reverse. 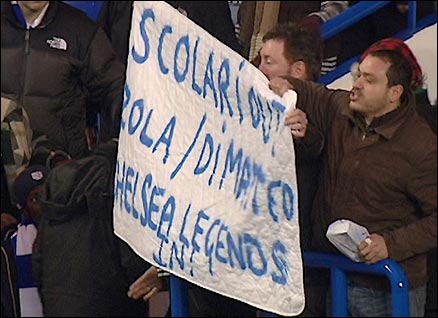 I found Scolari charming, gracious in defeat and disarmingly honest, a breath of fresh air. But there were whispers backstage at Anfield that all was not well.

A former Chelsea player told me that some senior players were not convinced by Scolari's methods and it was showing on the field. There were suggestions he was finding the transition from the hit-and-run style of international management to day-to-day affairs in a new country a difficult one to make.

I also have sympathy for Scolari in that success in football management, as in good comedy, can often rely on your timing.

Mourinho came to Stamford Bridge when Abramovich was prepared to lavish any sum imaginable on the team to attain success. He did a magnificent job, but make no mistake the cash helped him.

Scolari arrived when the purse strings were drawn tight - a situation exacerbated by a Chelsea team that was in serious need of a transfusion of new blood. He also had little to work with from Chelsea's youth system, overseen by Frank Arnesen.

Chelsea looked like a team coming to the end of a great era and in need of freshening up to conquer new horizons. Scolari's tools were never going to be as powerful as those at Mourinho's disposal.

Michael Ballack and Didier Drogba looked more like expensive, ageing luxuries with every passing week, while the young and hungry Michael Essien could only watch injured from the sidelines.

And then there was the Mourinho factor.

Do some of the players who hung on his every word still pine for the great man's return? It is a theory I think has merit.

He raised the bar - and Chelsea's expectations - to unimaginable, and now perhaps unattainable, heights and his succesors are suffering.

Will every successor be compared to Mourinho? It has been the case so far with both Avram Grant and Scolari.

Indeed Chelsea may continue to struggle until those emotional ties are cut, or new players untouched by the magic hand of Jose arrive at Stamford Bridge.

I actually believe Scolari is desperately unlucky to lose his job so swiftly, but the signs have not been good in recent months.

Chelsea are seven points off the Premier League summit, still in the FA Cup and in the last 16 of the Champions League. Scolari's successor will hardly inherit a scene of football wreckage.

The Stamford Bridge hierarchy are convinced they can still claim those trophies - but not with Scolari at the helm.